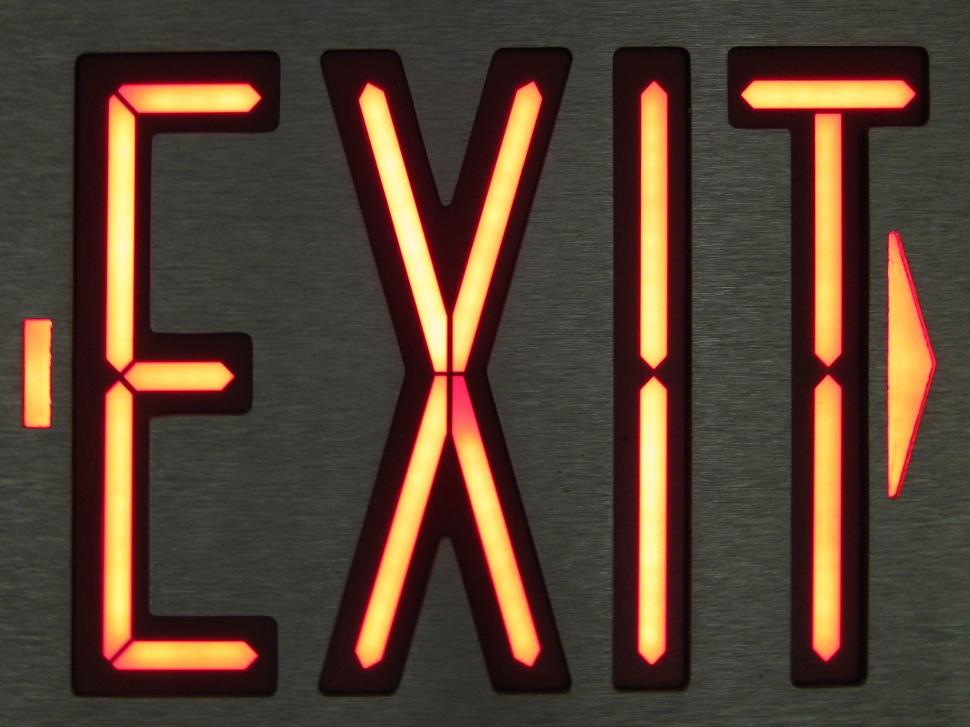 Have you ever been so uncomfortable around someone that you just had to leave? When Tammy and I had been married only a few months, we had an absolutely horrible argument. I stormed out of the house and started driving. When I reached Nashville, Tennessee, I decided that perhaps it was time to turn around and go home.

Can you imagine telling Jesus of Nazareth to leave? In this morning’s text, we find that very thing taking place. Jesus has just calmed the storm. He and His disciples arrive in the country of the Gadarenes. This community was overwhelmingly Gentile. If you know this passage, that makes perfect sense, for some folks there are raising pigs.

Jesus encounters a demonic man. When Jesus asks the demon for his name, the demon replies, “My name is Legion; for we are many” (v 9). There had to be many demons inside this man, for the people had chained him in shackles, but he would still break free (v 4). He would cry out night and day as he wandered about the tombs (v 5). The demonic man sees Jesus from a distance and runs to Jesus in order to worship Him, to confess that Jesus is the Christ, and to beg for mercy from the Master (vv 6-8). The demons beg Jesus to cast them into a herd of swine feeding near the mountains (vv 11-12). Jesus grants that permission, and roughly 2,000 swine go off the mountain and are drowned in the sea (vv 12-13). Those who took care of the swine went and told in the city what had been done (v 14), and the townspeople come to find the demonic man in his right mind (v 15).

The people come in from town, and they saw the demon possessed man sitting and clothed and in his right mind. Mark makes clear that a miracle has occurred. There is no other explanation. The One who calmed the storm, the One who had healed the sick was One who had authority in the demon world, and He could tell a demon to leave and it left.

The people were afraid. Why were they afraid? The Greeks had some superstitious ideas about performing magic; that could play a role in their fear. They were likely very concerned about their economic situation. If Jesus could send demons into a herd of swine and cause the owners and the feeders to suffer financially, what would He do to the rest of the people?

There seems to be a connection between the destruction of the swine and the people’s fear. Who told the people that the man’s demons were gone? Those who had been taking care of the swine. Notice verse 16: “Those who saw it told them how it happened to him who had been demon-possessed, and about the swine.” How are people going to have any livelihood at all if Jesus sticks around? Jesus needs to leave or these folks and their children are going to starve to death.

They were likely worried about their hearts. Jesus comes along and destroys evil with a word. If this Guy can destroy evil in a word, what will He do with their sins? “This is the condemnation, that the light has come into the world, and men loved darkness rather than light, because their deeds were evil” (Jn 3:19). You cannot allow a man who takes care of evil in the village; it is time for Jesus to go!

“They began to ask Jesus to leave.” The term “began” in Greek means to start an action only to have it interrupted. What action interrupted the people’s asking Jesus to leave? Jesus “got into the boat” (v 18). The people want Jesus to leave them alone . . . Jesus gets in His boat and leaves them alone.

If you want God to leave you and never bother you again, that can easily be arranged. That is a promise from God Himself. Jesus: “Whoever is ashamed of Me and My words, of him the Son of Man will be ashamed when He comes in His own glory, and in His Father’s, and of the holy angels” (Lk 9:26). You’re ashamed of Jesus; that’s fine and dandy. But, understand that He will be ashamed of you on that Last Day! “God . . . gave them up to uncleanness, in the lusts of their hearts, to dishonor their bodies among themselves” (Rom 1:24). God has given us free will, and it is our choice whether or not we honor Him and want Him in our lives. C.S. Lewis said, “There are only two kinds of people in the end: those who say to God, ‘Thy will be done,’ and those to whom God says, in the end, ‘Thy will be done.’ All that are in Hell, choose it. Without that self-choice there could be no Hell.”

Jesus got into His boat. The people had rejected the Christ, and He gives them that full freedom.

That was the reality of His physical life. Why did Herod have the innocents killed? Because Jesus made him uncomfortable! When Jesus talked about being the bread of life, “many of His disciples went back and walked with Him no more” (Jn 6:66).

Jesus can make us uncomfortable because of His power. Because of some superstitions the ancient Greeks held, it seems very likely that the people were afraid of Jesus because of His great power. Jesus told a powerful demon–one that had caused a man to break chains–to come out of a man and the demon leaves. Are we ever uncomfortable with Jesus’ great power? You know that He has all power. The Father made the entire cosmos through Him (Jn 1:3). Jesus never attended a single funeral that He didn’t raise the dead. After Jesus ascended to heaven, He poured the Holy Spirit on the Apostles and they went throughout the world preaching His Gospel (Acts 2:33). He can use His power for our benefit: God can “do exceedingly abundantly above all that we ask or think, according to the power that works in us” (Eph 3:20).

Do you ever get uncomfortable with Jesus’ power? What does your prayer life reveal? Do you pray for God to bless a cancer patient or two, or do you pray that God will eradicate cancer once and for all? Do you have a few lost friends and pray for them, or do you pray that God will bless Roanoke and that we may win the entire city to Christ? Don’t be afraid to pray “big prayers.” “The effective, fervent prayer of a righteous man avails much” (Js 5:16). Commit to praying big prayers this week.

What does your life reveal? Do you wish to walk in “newness of life” with the help of God, or are you content to stay in some sin? Is there a sin you enjoy far too much to give over the power of Jesus? After Paul writes about the sin in his life, he says, “Who will deliver me from this body of death? I thank God–through Jesus Christ our Lord!” (Rom 7:24-25).

Jesus can make us uncomfortable because of His economy. The people want Jesus to leave. If the Lord could put a pig farmer out of business, what could He do for the rest of them? Jesus has always made people feel uncomfortable about money. As it’s recorded in the Gospels, the Lord spoke more about money than He did anything else. His words were not always welcomed warmly. When Jesus told the rich young ruler to sell his goods and give to the poor, “he was sad at this word, and went away sorrowful, for he had great possessions” (Mk 10:22). As Jesus was teaching on money, “the Pharisees, who were lovers of money, also heard all these things, and they derided Him” (Lk 16:14).

Do we get uncomfortable when we think about what Jesus said about money? When the collection plate comes around, do we really want to be reminded that “you cannot serve God and mammon” (Lk 16:13)? When you hear of a need in this church or in the community, do you want to hear that “it is more blessed to give than to receive” (Acts 20:35)? When tax time comes around, how giddy to you get that we must “render . . . to Caesar the things that are Caesar’s, and to God the things that are God’s” (Matt 22:21)?

Take a hard look at your budget. Where are your priorities? You can tell what matters most to you by taking a careful look at your wallet. “Where your treasure is, there your heart will be also” (Matt 6:21). Commit to generous giving. The Macedonians gave far beyond their ability to give (2 Cor 8:3). Do you know why they gave so freely? “They first gave themselves to the Lord, and then to us by the will of God” (2 Cor 8:5). Where can you be a generous giver?

Jesus can make us uncomfortable because of His perfection. The people saw in Jesus One who could dispel darkness. With one command, Jesus took care of the evil in a man’s life. What could He do about the evil in their lives?

What can Jesus do with the evil in your life? You know that He can remove it. “God demonstrates His own love toward us, in that while we were still sinners, Christ died for us” (Rom 5:8). After Paul lists a host of sins the Corinthians had committed, he says, “But you were washed, but you were sanctified, but you were justified in the name of the Lord Jesus and by the Spirit of our God” (1 Cor 6:11).

But, the fact that Jesus removes my sin is only part of the story. I must forsake it, and that’s not the most comfortable thing, is it? When the woman caught in adultery found forgiveness before Jesus, He told her, “Go, and from now on sin no more” (Jn 8:11, ESV). Romans 6:11-14.

Sometimes people get the impression that they need to clean up their lives before they come to Jesus. That is as faulty an assumption as one can make. As the hymn says, “Just as I am.” The reason we come to Jesus is that our lives are a mess. You cannot make your life right on your own. Paul prayed for the Ephesian church. He prayed that God “would grant you, according to the riches of His glory, to be strengthened with might through His Spirit in the inner man” (Eph 3:16). When you come to Jesus, you have strength to put off the old self.

Do you need to come and be made new in the blood of the Lamb?