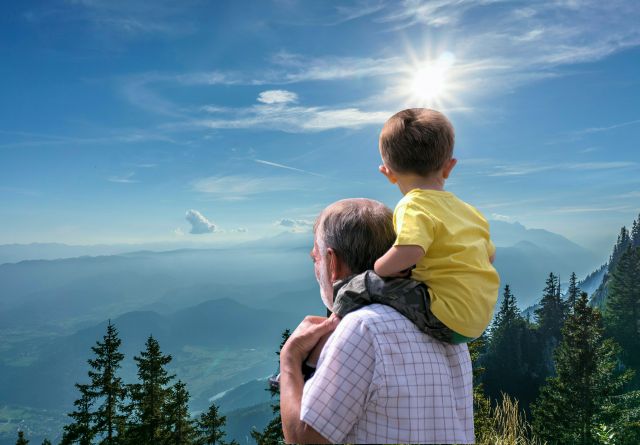 There could be nothing more frightening for a parent than having his child lost- there is not a parent alive who would not give all that he has to find his lost child. Imagine how God must feel – here are creatures he loves more than anything and yet they are lost! God went to great lengths to save these creatures; he gave his Son to die for man’s sins.

Imagine the rejoicing God must do when a man comes to be saved. A parent who is looking for a lost child is going to rejoice greatly when that child is found. Jesus tells us that there is great rejoicing in heaven over a sinner who repents (Lk. 15:7, 10).

This morning, we want to examine our sinfulness and God’s forgiveness.

A man had two sons, and the younger asked his father for his share of the inheritance. The father divided his livelihood to his sons. The share of the inheritance belonging to the younger son would have been 1/3 of the estate, for under the Old Testament the elder son received a “double portion.” Notice the desire for gratification of this son. He just had to have that money — since his father had hired servants, his portion could have been quite sizeable. Aren’t people often like this son? They just have to gratify their desires – they have the extramarital sex, they lose their temper because someone is preventing them from fulfilling our desires, they become drunk, they lie for they desire to look good in the eyes of others. This son ran into trouble because of his desire for gratification. Let us keep these desires in check.

After the son received his inheritance, he gathered his belongings and journeyed to a distant country where he wasted his possessions. The land this son journeyed to was beyond the influence of his father. The son wanted to be certain that his father could not control his actions. This is the way that so many treat God. They want to be as far beyond his control, beyond his influence as possible. They don’t want God telling them what to do.

Notice that the son left the father, not vice versa. When someone becomes unfaithful, that person leaves God; God does not leave.

The son wasted his living. The wasting implies foolishness; instead of using his possessions wisely he squandered what he had. In the same way, living outside the boundaries of God’s laws is foolish.

“Prodigal living” refers to spending too much money on lusts and appetites. The idea is that the prodigal son spent his inheritance on sinful pleasures.

When his money was gone, a famine arose in the land. The prodigal was hired to feed swine, and he was so poor that he wanted to eat the pods the swine ate. When the famine arose, the prodigal began to be in need. His new life, new freedom was no longer as attractive as it had been. This new life had so many promises, but it never delivered. Sin works exactly the same way. When individuals go into sin, they are looking forward to freedom and happiness. But, the freedom and happiness turn into emptiness and despair.

The prodigal found a job feeding swine. Swine were abhorrent to the Jews, for they were unclean animals. This shows the dire situation of this boy. He was in such a dire situation he wished to eat the pigs’ food. Sin will leave us in dire situations as well. Sin will entrap us and cause us to do things we do not wish.

No one gave the prodigal anything. No doubt when the prodigal went to the far country with much money, everyone wanted to be his friend. But, now that he had nothing to offer them, his friends left him. If we are not careful about the people with whom we associate, we will end up with friends like the prodigal. As long as things are going well, they will be our friends, but when things cease to go well, they’ll go on to use the next person.

He came to his senses and decided to return to his father. He came to himself. “He came to his senses” was a common idiom which carried the connotation of repentance. If we are in the far country of sin, we need to come to ourselves. Without repentance, there can be no forgiveness. “Unless you repent you will all likewise perish” (Lk. 13:3). “These times of ignorance God overlooked, but now commands all men everywhere to repent” (Acts 17:30).

The son arose and went to his father. That shows a manly spirit – not only did he decide to go, but he actually went.

He ran, fell on his son’s neck, and kissed him. In that culture, the father normally would not have ran. He would have been more reserved than that, but he was so tickled to have his son back that he could not help himself. He fell on his son’s neck and kissed him. His father loved him and loved him deeply. God loves us deeply, as well. “God demonstrates His own love toward us, in that while we were still sinners, Christ died for us” (Rom. 5:8). “In this the love of God was manifested toward us, that God has sent His only begotten Son into the world, that we might live through Him” (1 Jn. 4:9).

The son confessed his sin to his father. He kept his promise. Too many times we make promises that we don’t keep – “I’m going to be baptized,” “I’m going to give up some sin,” but we never do.

The father began to celebrate when his son came home. The father told his servants, “Put the best robe on him, put a ring on his finger and sandals on his feet.” The robe, ring, and sandals signified more than sonship. The robe was a ceremonial one which was given to the guest of honor at a banquet. The ring signified authority. Only a freeman could wear the sandals the father had placed on his son’s feet. This father accepted his son back as more than a slave; he accepted him as his son, and he bestowed honor upon him. God has accepted us as children and bestowed honor upon us.

The father instructed the servants to kill the fatted calf. This calf was probably being fattened for some special celebration, for people in the first century did not regularly eat meat. This father was overjoyed that his son had come home, and he wanted to celebrate. When we come back to God, he is overjoyed, and he desires to celebrate.

The father began to celebrate, because he had found his son. When we come back to God, he rejoices.