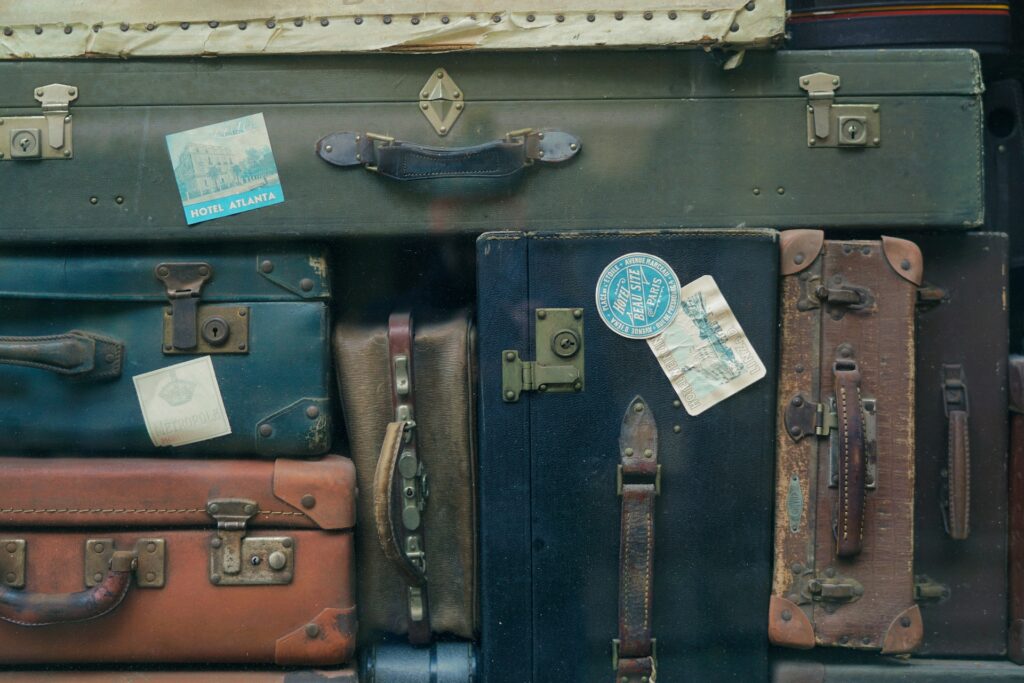 Before British actor Robert Morley died, he asked that his credit cards be buried with him. After he died, the London Time‘s letters to the editor were filled with the thoughts of readers pondering their own deaths and their perpetual needs. M. L. Evans of Chester wrote, “In the unfortunate event of the miscarriage of justice and several thousand years ensuing before my sentence is quashed, I will take a fire extinguisher.” Heather Tanner of Woodbridge specified a good map. “I have immense trouble finding my way in this life,” she said, “so I am extremely worried about the next.” A pair of earplugs would accompany Sir David Wilcocks of Cambridge “in case the heavenly choirs, singing everlastingly, are not in tune.” Maurice Godbold of Hindhead would take a crowbar, “in case the affair proved premature.”

What is it that you would take to the next life, if you could? Granted, we shall take nothing out of this world. “We brought nothing into the world, and we cannot take anything out of the world” (1 Tim 6:7). As has often been said, you don’t see a U-Haul following the hearse.

But, what if we could take something into the next life? What would you want to take? Is there some sentimental possession that you can just not imagine living without? Is there some gadget that you think you just might need? This morning, we want to “Pack our Bags” for the trip to the next world.

Indeed, there is some packing we need to do, for there are some “things” we shall desperately need in the next life. We need to pack for that life, for sooner or later, we shall enter it. Stuart Briscoe wrote that when he moved to the United States, he was impressed with the sheer number of total strangers who came to visit, but they all sold insurance! One day, a salesman said, “If something should happen to you, Mr. Briscoe…” But, he was interrupted with, “Please don’t say that. It upsets me.” The salesman was a little started and said, “But with all due respect, sir, we must be ready if something should happen to us.” “Don’t say that,” Mr. Briscoe insisted. The poor man looked totally bewildered and said, “I don’t understand what I said to upset you.” “Then I’ll tell you,” came the reply. “It upsets me that you talk about [life’s] only certainty as if it’s a possibility. Death isn’t a possibility; it’s a certainty. You don’t say, ‘if,’ you say ‘when,’ whenever death is the subject.”

It is, indeed, a certainty that we shall leave this world. “Death spread to all men because all sinned” (Rom 5:12). Every hour approximately 5,417 people die! That is well over 47 million people a year!

I do not know how we shall leave this world. Death may come after we have struggled with some horrible disease; death may come rather quickly on a dark and slippery road. It may be that we never face death, but the Lord Jesus appears in the heavens and transforms our bodies.

It doesn’t matter one whit how we leave this life; we are going to leave it. Therefore, we must be prepared to leave this world. Even though he waits until the very last minute, one of the robbers who was crucified with Jesus speaks volumes about preparing to leave this world. This morning, we want to use this thief as an example of how you can “PACK YOUR BAGS.” That thief had three bags he packed as he readied to breathe his last.

“One of the criminals who were hanged railed at him, saying, ‘Are you not the Christ? Save yourself and us!’ But the other rebuked him, saying, ‘Do you not fear God, since you are under the same sentence of condemnation? And we indeed justly, for we are receiving the due reward of our deeds; but this man has done nothing wrong.”

We know that Jesus was crucified between these two thieves (Mk 15:27). One thief can think of nothing but himself and his agony. Crucifixion was, indeed, a horrible way to die. Nerves were often severed as spikes were placed in the hands and feet. The way one was placed on the cross made breathing nearly impossible. In fact, the method was to designed to suffocate criminals.

This one thief never stops to consider anything more than this present existence. How many are just like him in this present world? They seek out the best IRA so that they can plan for retirement, but they never plan for eternity. They work hard to seek a promotion, but they fail to “work out [their] own salvation with fear and trembling” (Phil 2:12)? Will we, like this unrepentant criminal, leave our bags unpacked?

On the other hand, the other criminal packed the BAG OF CONTRITION in that he displayed genuine remorse. The penitent thief says to his fellow criminal, “We are receiving the due reward of our deeds” (v 41). This thief fully recognizes that the punishment he is receiving is greatly deserved. In his recognition of his crime, the thief displays great remorse. This entire passage makes clear the thief’s remorse. He chastises his fellow thief for his refusal to fear God. He freely admits that he is rightly being put to death. The greatest evidence of this thief’s contrition is the very fact that Jesus forgives him.

Without contrition-without repentance-there cannot be forgiveness. “Unless you repent, you will . . . likewise perish” (Lk 13:3, 5). “Repent therefore, and turn again, that your sins may be blotted out” (Acts 3:19).

The thief confesses two truths about Jesus. He recognizes: One, he is innocent and Two, he has a kingdom. He says, ‘This man has done nothing wrong.’ And he said, ‘Jesus, remember me when you come into your kingdom.'”

The thief fully recognizes that Jesus has done nothing worthy of death. In fact, at Jesus’ trial, no one was found to bearing evidence that would have crucified him. “Now the chief priests and the whole Council were seeking false testimony against Jesus that they might put him to death, but they found none, though many false witnesses came forward” (Matt 26:59-60). Finally, they were able to find a couple of witnesses who spoke of a “crime” worthy of death: “At last two came forward and said, ‘This man said, “I am able to destroy the temple of God, and to rebuild it in three days”‘” (Matt 26:60-61).

We understand that Jesus never committed a capital crime, for he never committed any sin. “We do not have a high priest who is unable to sympathize with our weaknesses, but one who in every respect has been tempted as we are, yet without sin” (Heb 4:15). “He committed no sin, neither was deceit found in his mouth” (1 Pet 2:22).

The penitent thief also recognized that Jesus has a kingdom and he asked Jesus to remember him when he came into that kingdom. Confessing that Jesus has a kingdom is tantamount to confessing that he is the Messiah. The Old Testament recognized that the Messiah would have a kingdom. “To us a child is born, to us a son is given; and the government shall be upon his shoulder, and his name shall be called Wonderful Counselor, Mighty God, Everlasting Father, Prince of Peace. Of the increase of his government and of peace there will be no end, on the throne of David and over his kingdom, to establish it and uphold it” (Is 9:6-7). “I saw in the night visions, and behold, with the clouds of heaven there came one like a son of man, and he came to the Ancient of Days and . . . . to him was given dominion and glory and a kingdom” (Dan 7:13-14).

The New Testament ties Jesus’ Messiahship with his Kingship. When the wise men came from the east, they asked, “Where is he who has been born king of the Jews? For we saw his star when it rose and have come to worship him” (Matt 2:2). The message of John the Baptist, in preparing the way for Jesus as the Messiah, was simply, “Repent, for the kingdom of heaven is at hand” (Matt 3:2). The point is that the penitent thief on the cross understood precisely who Jesus is and confessed that faith with his request that Jesus remember him when he came into his kingdom.

If we are to “PACK OUR BAGS” for the next world, we must certainly pack the BAG OF CONFESSION. Like the penitent thief, we need to confess our faith in Christ as the Messiah. “Everyone who acknowledges me before me, I also will acknowledge before my Father who is in heaven” (Matt 10:32). “If you confess with your mouth that Jesus is Lord and believe in your heart that God raised him from the dead, you will be saved” (Rom 10:9).

But, we dare not believe that we can confess our faith before baptism and be done with such a confession. Notice what Paul writes to Timothy: 1 Timothy 6:12-14. Timothy had “made the good confession in the presence of many witnesses.” Yet, that did not end his obligation to what he confessed: He was to keep the commandment “unstained and free of reproach” until the return of Christ. As we mentioned last Sunday morning, when we first come to Christ, we are making a pledge to follow him our entire lives. We have so many opportunities to confess our faith in Christ. Every Sunday morning when we leave for worship, we are confessing to our friends and neighbors that we believe Jesus is the Son of God. Every time we seek to treat others as we would be treated, we are confessing our faith in Jesus as the Messiah. Every time we answer honestly-regardless of consequences-we are confessing our faith in Jesus as the Christ.

Do you need to pack the BAG OF CONFESSION this morning?

“He said, ‘Jesus, remember me when you come into your kingdom.’ And he said to him, ‘Truly, I say to you, today you will be with me in Paradise.'”

The penitent thief packed THE BAG OF CHRIST by receiving Jesus’ pardon. When the thief asked Jesus to remember him when he entered his kingdom, the Lord replied, “Truly, I say to you, today you will be with me in Paradise.” The word “Paradise” has quite an intriguing usage. The word is actually a Persian term and refers to the beautiful gardens Persian kings were known to build; in fact, Nebuchadnezzar’s Hanging Gardens were one of the Seven Wonders of the Ancient World. The Jews came to use the term to refer to the abode of the righteous between death and the judgment. Jesus, thus, promises this penitent thief eternal salvation, for he would-that very day-enter the abode of the righteous.

Through the years, many have attempted to proclaim that this thief is absolute proof that one does not need to submit to baptism, for the thief’s sins were forgiven without baptism.

This sermon was the idea of my then-10-year-old son, RJ Imel.