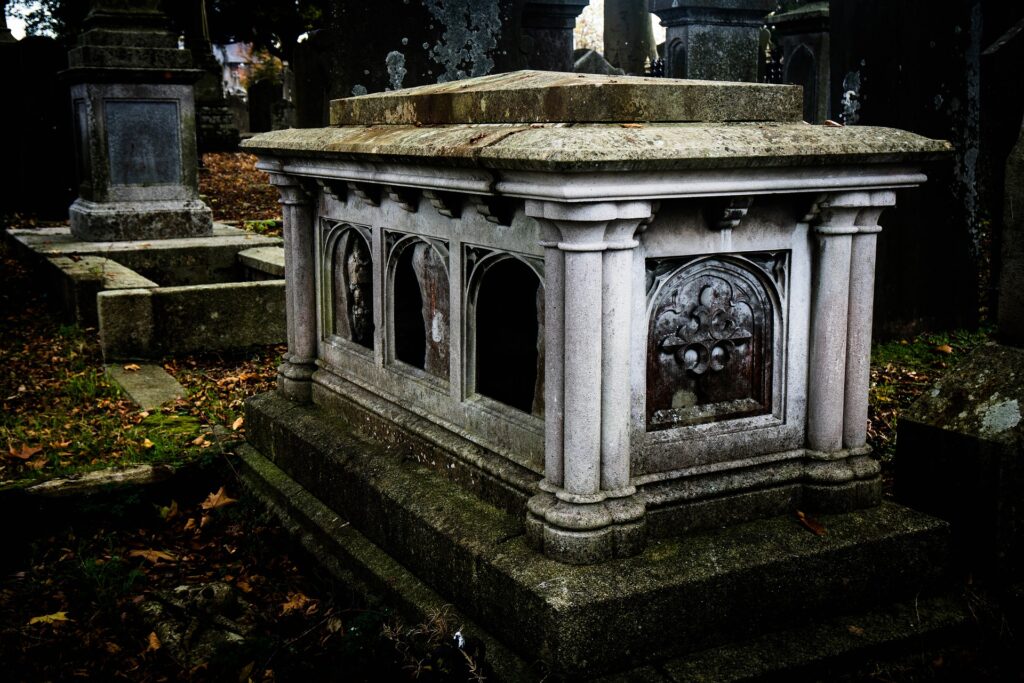 An Atlanta mortician has adopted the drive-in window approach for busy mourners. He is having five windows installed in an extension of his funeral home. Each window is six feet long and will contain a body in its coffin. The mortician says, “So many people want to come by and see the remains of a relative or friend, but they just don’t have the time. This way they can drive by and just keep on going.”

We’re going to a funeral this morning, and if you want the body, you’d better hope that the funeral director has a drive-in window. You see, the funeral isn’t going to last all that long, for Jesus is going to show up and put an end to the funeral by raising the corpse. It is, as D. L. Moody, a well-known denominational preacher once said, “I was called to preach at a funeral once, and I thought I would try to preach as nearly as I could as Christ used to preach. So I searched the record, but I found that Jesus Christ never preached a funeral sermon; for when he went to a funeral the dead body always arose and lived.”

That is precisely what we find in this morning’s text. A funeral is in progress, Jesus sees the funeral, and he stops it by raising the dead. It is truly “A Fast Funeral.” This morning, we wish to rush to this “Fast Funeral” to see what lessons we can learn.

On our way to this funeral, we quickly discover that it is:

“He went to a town called Nain, and his disciples and a great crowd went with him. As he drew near to the gate of the town, behold, a man who had died was being carried out, the only son of his mother, and she was a widow, and a considerable crowd from the town was with her.”

Jesus sees an extremely forlorn situation – a widow has lost her only son. In the economic situation of Jesus’ day, women generally did not have careers and they relied on their husbands and sons for support. You recall that in the Book of Ruth, Ruth followed behind the reapers to gather grain for herself and Naomi. In 1 Timothy 5:3-4, Paul instructs the church to provide for widows who have no children. The widow at Nain has lost her only son – she is going to be totally at the mercy of others. She is in dire straits.

“And when the Lord saw her, he had compassion on her and said to her, ‘Do not weep.'”

Our Lord sees this woman’s suffering and he intensely feels her suffering. The Greek term “compassion” means “to be moved in the bowels.” In antiquity, the bowels were considered the seat of emotions. Of course, when you are terribly upset, you often get sick at your stomach. Thus, the ancients – with their limited scientific knowledge – thought the emotions came from the gut. The point is: Jesus turns this funeral into “A Felt Funeral” – he feels deep emotion for the suffering widow.

As further evidence of Jesus’ emotion at this “Fast Funeral,” we read that Jesus touched the brier upon which the corpse lay. That act made Jesus ceremonially unclean, for he came into contact with a body. Jesus’ compassion and his concern for this dear woman overrides any concern he might have had about ritual purity.

I have no doubt whatsoever that every funeral we attend now is “A Felt Funeral” – the Lord is greatly troubled by grief. Death is an enemy of the Lord (1 Cor 15:25-26); the Lord hates death and he was raised to destroy death and shall destroy death forever when he comes again! Our God cares greatly for us: “Are not five sparrows sold for two pennies? And not one of them is forgotten before God. Why, even the hairs of your head are all numbered. Fear not; you are of more value than many sparrows” (Lk 12:6-7). Frank Graeff asks the question: “Does Jesus care when I’ve said ‘goodbye’ To the dearest on earth to me, And my sad heart aches till it nearly breaks, Is it aught to Him? Does He see?” We don’t need that hymn’s chorus to tell us he cares! I have the Word of God to assure me that in my darkest night God cares!

We’d better hurry if we wish to make that funeral, for Jesus has already arrived and the funeral very quickly turns into

“Then he came up and touched the bier, and the bearers stood still. And he said, ‘Young man, I say to you, arise.’ And the dead man sat up and began to speak, and Jesus gave him to his mother.” Jesus comes up to the brier and turns this funeral into “A Finished Funeral.” He orders the young man to arise. The young man sits up and begins to speak. Luke likely records that the young man began to speak to give demonstrable proof that the young man was raised from the dead. This was no trick, no sleight of hand. The corpse not only arises but he begins to speak.

The funeral is now over. It is “A Finished Funeral.” There is no reason for the procession to continue to the cemetery, for the young man now lives.

Oh, the great power our Lord Jesus Christ has over death—from this young man, to Lazarus, to Jairus’ daughter! Yet, this morning, each of those whom Jesus raised is dead – this widow’s son, Lazarus, Jairus’ daughter. The Lord did not really resurrect them; he only resuscitated them until they would die again. However, Jesus himself was raised from the dead never to die again. “We know that Christ, being raised from the dead, will never die again; death no longer has dominion over him” (Rom 6:9). Therefore, Jesus has power over death: To John, Jesus declares, “I am the first and the last, and the living one. I died, and behold I am alive forevermore, and I have the keys of Death and Hades” (Rev 1:17-18). When the Lord comes again, he shall resurrect to life all those who died in him: “The Lord himself will descend from heaven with a cry of command, with the voice of an archangel, and with the sound of the trumpet of God. And the dead in Christ will rise first. Then we who are alive, who are left, will be caught up together with them in the clouds to meet the Lord in the air, and so we will always be with the Lord” (1 Thess 4:16-17). When Jesus comes again, talk about “A Finished Funeral” – there shall never be another funeral, for death shall be vanquished forever!

After the funeral is over, this service becomes

“Fear seized them all, and they glorified God, saying, ‘A great prophet has arisen among us!’ and ‘God has visited his people!’ And this report about him spread through the whole of Judea and all the surrounding country.”

The people present at this “Fast Funeral” quickly realize they have been to a funeral like no other! They begin to praise God for what had taken place. They realize that Jesus is no ordinary man. The people do not keep this a secret, but this funeral becomes very famous – the report spreads throughout “all the surrounding country.”

How could this funeral not become quite famous? Put yourself in these folks’ shoes for a moment. You’ve been to the funeral home, seen the body in the casket, shed some tears, and hugged the family. The next day, the dinner here at the building is all ready and you go to the funeral home. Some guy comes in just before the service and tells the body to get up – he does so and begins to talk. Are you not going to tell everyone about the time you were at a funeral and saw a body resurrected?

Each of us has seen the dead raised! We have seen individuals dead in sin lowered in baptism and seen them raised a new creature: “We were buried therefore with him by baptism into death, in order that, just as Christ was raised from the dead by the glory of the Father, we too might walk in newness of life” (Rom 6:4). Each baptism we have witnessed as been a resurrection from death to life.

How can we not tell others of the wonderful Savior who can raise the dead?! People are dying lost every single day – How can we do nothing?!?! The Lord has called us to the task of sharing his message: “Go . . . and make disciples of all nations, baptizing them in the name of the Father and of the Son and of the Holy Spirit, teaching them to observe all that I have commanded you” (Matt 28:19-20). Shall we be those who go? Is it the case this morning that you need to come to Jesus who can resurrect you to a new creature?