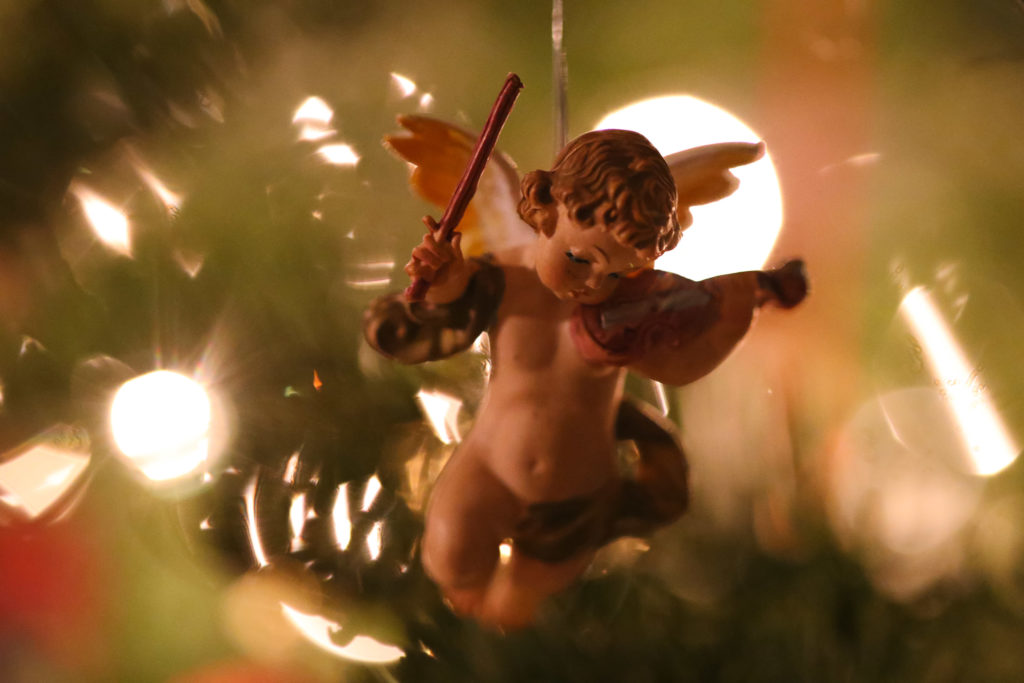 A Sunday school teacher asked her class, “What is Christmas a time for?” Several kids gave the usual answers—Jesus’ birthday, a time of joy. But one little boy said, “Christmas is a time for sportsmanship.” “Sportsmanship?” the teacher asked. “Yes,” said the boy,” you need sportsmanship because you don’t always get everything you want.”

We may not get everything we want at Christmas, but the truth is that in the birth of Jesus God gave this world exactly what it needed. After his Son had been born into this world, God sent an angel to shepherds near Bethlehem to tell them he had given the world exactly what it needed. This morning, we want to look at the message of the angel. As we do so, well see a:

An angel of the Lord appeared to shepherds who were watching their flock at night. The glory of the Lord shone around the shepherds, and they were filled with fear.

Luke records that these shepherds were in close proximity to Bethlehem. Bethlehem was quite near Jerusalem, and many scholars theorize these shepherds may have been watching over the temple flock, the sheep which were used in sacrifices at the temple. Would that not be a touch of irony if these shepherds who were watching sheep to be sacrificed for the sins of the people are told of the birth of the Lamb of God who takes away the sin of the world?

But what is so interesting about the angel’s appearing to the shepherds is that shepherds were not at all respected at the time of Jesus’ birth. At one point, shepherds were highly respected among the Jewish people—King David, after all, was a shepherd.

Shepherds were basically nothing but social outcasts in Jesus’ day.

During his ministry, Jesus showed that all people have worth and value.

When a leper came and asked for healing, Jesus moved with pity, “stretched out his hand and touched him” (Mk 1:41). You just did not touch a leper—leprosy was a highly contagious disease and lepers were unclean. But Jesus reaches out and touches him ad says, in essence, “You have value and you have worth.”

When a prostitute a anoints Jesus’ feet, the people in the house sneer. In fact, Jesus’ host at that dinner said to himself, “If this man were a prophet, he would have known who and what sort of woman this is who is touching him, for she is a sinner” (Lk 7:39). Simon basically says, “I wouldn’t let her touch me, and this guy shouldn’t let her touch him.” But you know what Jesus did. He looked at her and said, “Your sins are forgiven” (Lk 7:48). Jesus says, in essence, “You have value, and you have worth.”

The angel came and told the shepherds, “To you is born this day in the city of David a Savior, who is Christ the Lord.”

The shepherds heard that no longer would their flocks be used to atone for the sins of the world, for a Savior had come.

Salvation did, in fact, come through Jesus. When John the Baptist saw Jesus, he explained, “Behold, the Lamb of God, who takes away the sin of the world!” (Jn 1:29). “God sent the Son into the world, not to condemn the world, but that the world might be saved through him” (Jn 3:17). “The saying is sure and worthy of full acceptance, that Christ Jesus came into the world to save sinners. And I am the foremost of sinners” (1 Tim 1:15). “We have seen and testify that the Father has sent his Son as the Savior of the world” (1 Jn 4:14).

We so desperately need this message of salvation. You see, there isn’t a one of us here without sin. “If we say we have not sinned, we make him a liar, and his word is not in us” (1 Jn 1:10). There are some good people here this morning, but we are all sinners—every last one of us.

During hard times in the darkness o winter in an Alaskan Eskimo village a young man of unequaled courage might go out into the bitter cold in search of food for his people. Armed with only a pointed stick and his compassion for his starving village, he would wander, anticipating the attack of a polar bear.

Having no natural fear of humans, a polar bear will stalk and eat a man. In the attack, the Eskimo hunter would have his hands and spear to anger the bear and make him rise up on his hind legs to over ten feet in height; and then, with the spear braced to his foot, the hunter would aim for the heart as the weight of the bear came down upon his spear. With hear pierced, the bear might live long enough to maim or kill this noble hunter.

Loving family and friends would then follow his tracks out of the village and find food for their survival and evidence of profound courage.

Just as the noble hunter would willingly give himself for the survival of his village, Jesus willingly came for the purpose of our spiritual savior. Is he your Savior?

Suddenly there was with the angel a multitude of the heavenly host praising God and saying, “Glory to God in the highest, and on earth peace among men with whom he is pleased!”

The shepherds beheld a multitude of the heavenly host praising God. We know that God has an innumerable host of angels. When Peter cut off the slave of the high priest, Jesus asked him, “Do you think that I cannot appeal to my Father, and he will at once send me more than twelve legions of angels?” (Matt 26:53). A legion was 6,000 soldiers, but the meaning here is probably “a great number.” “Then I looked, and I heard around the throne and the living creatures and the elders the voice of many angels, numbering myriads of myriads and thousands of thousands” (Rev 5:11).

Some of those angels appeared to the shepherds and praised God for the salvation he was accomplishing in the Christ. What I find so amazing about their angelic worship is that angels have no salvation. “God did not spare the angels when they sinned, but cast them into hell and committed them to pits of nether gloom to be kept until the judgment” (2 Pet 2:4). Those angels who sinned had no second chance; once they sinned, they were damned. Yet we find angels praising God for the salvation of men.

If angels came and worshiped God for the salvation he accomplished through Christ, is it not imperative for those of us who have benefited from that salvation to praise God?

We’re exhorted to praise God. “O come, let us worship and bow down, let us kneel before the LORD, our Maker!” (Ps 95:6). “Worship the LORD in holy array; tremble before him, all the earth!” (Ps 96:9). “Who shall not fear and glorify thy name, O Lord? for thou alone art holy. All nations shall come and worship thee, for thy judgments have been revealed” (Rev 15:4).

Do you worship the Lord as faithfully and as reverently as you could?

When the multitude of angels left, the shepherds went to Bethlehem to find the baby Jesus. The shepherds, were told, went with haste to Bethlehem—something very unusual had occurred, and they just couldn’t wait to get there. Bethlehem wasn’t a large place, so it’s reasonable to think the shepherds looked through every stable until they found the one with the young family.

How could the shepherds keep from telling everyone they saw about the scene they had just witnessed?

They had witnessed something unique in the history of the world, a band of angels announcing the birth of the long-awaited Messiah. Choirs were used in the worship of the Roman Emperor Augustus, but no angel from heaven ever came and worshiped Augustus. Yet, here there are angels from heaven announcing the birth of a King, and the shepherds are able to go and find everything just as the angels said they would.

So why would they have been believed. I think it must have had to do with the excitement in their voice, the wander in their eyes, and glow on their face. The shepherds must have been so overcome with emotion that everyone who encountered them know that they had witnessed something fabulous.

A group of prospectors set out from Bannock, Montana (then the state capital), in search of gold. They went through many hardships and several of their little company died en route. Finally, they were overtaken by the Indians who took their good horses, leaving them with only a few limping old ponies. Then they threatened them, telling them to get back to Bannock and stay there, for if they overtook them again, they would murder them.

Defeated, discouraged, and downhearted, the prospectors sought to make their way back to the capital city.

On one occasion as they tethered out the limping ponies on a Creekside, one of the men casually picked up a little stone from the creek bed. He called to his buddy for a hammer and upon cracking the rock, he said, “It looks as though there may be gold there.” The two of them panned gold the rest of the afternoon and managed to realize 12 dollars’ worth. The entire little company panned gold the next day in the same creek and realized 50 dollars, a great sum in that day. They said to one another: “We have struck it!”

They made their way back to Bannock, and they vowed not to breath a word concerning the gold strike. They secretively set about re-equipping themselves with supplies for another prospecting trip. But when they got ready to go back, 300 men followed them. Who had told the people in town of the prospectors’ find? No one! Their beaming faces betrayed the secret!

Have our beaming faces betrayed our “secret?” Are our lives so full of hope and faith and love that we are so excited and our faces glow so much that no one can help but know that we know Jesus?

We may not get everything we want for Christmas, but because Jesus came into this world and died for us we can have everything we need.

Have you been to Jesus to receive everything you need?