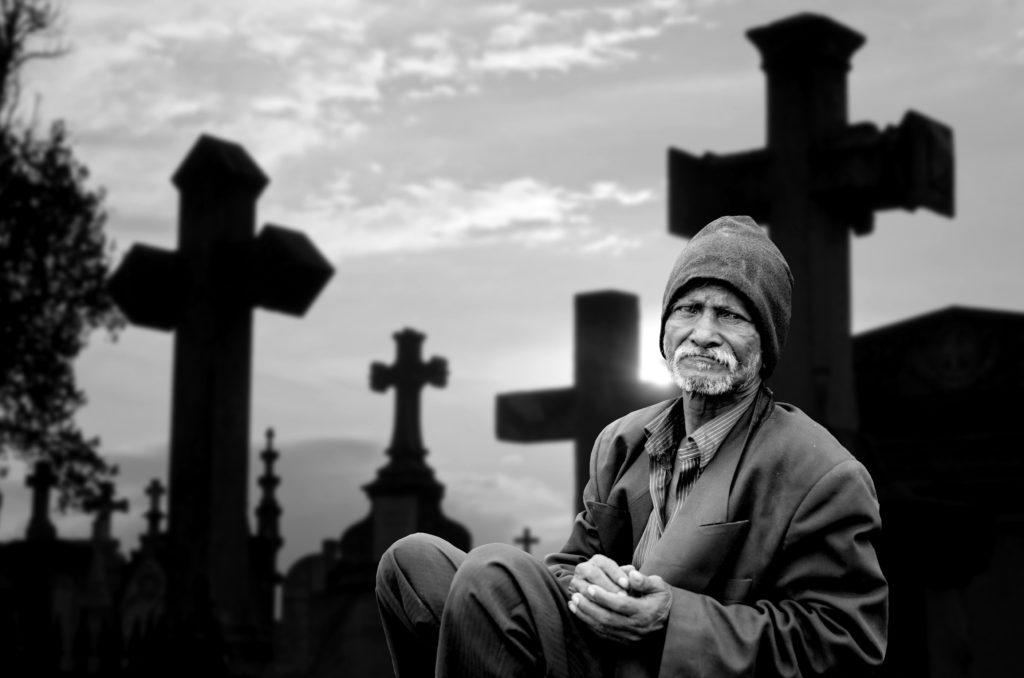 An English doctor built an experimental room where one can get away from everyone. But his experiments showed that isolation produces misery instead of ecstasy. Dr. Smith’s quiet place was a 9′ x 9′ x 7 1/2′ soundproof room suspended by nylon rope at the top of a large building. Each volunteer was equipped with padded fur gloves and heavy woolen socks to reduce the sensation of touch. Each was given translucent goggles over his eyes to eliminate patterned vision. Volunteers were observed through a one-way screen, but they could not see out. Meals were eaten inside the isolation box. After an hour or more, concentration was lost. Then came anxiety or feelings of panic. Many could not stand the aloneness for more than five hours.

There could not be a worse feeling than to be all alone in this world – to have no family, no friends, no one who cared. God created man as a social being. When Adam was by himself in the Garden of Eden, we read, “It is not good for the man to be alone. I will make a helper suitable for him” (Gen. 2:18). Surely, man’s social need is a reason for the establishment of the church. Fellowship was important in the early church – “Every day they continued to meet together in the temple courts. They broke bread in their homes and ate together with glad and sincere hearts” (Acts 2:46).

This morning’s text is about being forsaken, being all alone in this world.

After Joshua’s generation had died, another generation grew up who knew neither the LORD nor what he had done for Israel. What does the historian mean when he says that the newer generation knew not the LORD? The Hebrew word for “know” is used in a variety of ways in Scripture; as fits this context, the word refers to an intimate relationship. After Moses died, we read, “Since then, no prophet has risen in Israel like Moses, whom the LORD knew face to face” (Ex. 34:10) – This doesn’t mean that God simply knew who Moses was, but it means that they had an intimate relationship. The verb is used of the sexual relationship, a very intimate relationship: “Now Adam knew Eve his wife, and she conceived and bore Cain” (Gen. 4:1).

Thus, the Hebrews in the time just before the judges did not have an intimate relationship with God. This does not mean that the Hebrews did not just know who God was, although that is implied in this passage. There was no relationship with God, no walking with God; we must know God – not just know about him – we need to walk with him. “This is the account of Noah. Noah was a righteous man, blameless among the people of his time, and he walked with God” (Gen. 6:9). Of Levi, the Lord said, “True instruction was in his mouth and nothing false was found on his lips. He walked with me in peace and uprightness, and turned many from sin” (Mal. 2:6).

Could it be said that we know the Lord? Do we walk with him and strive to live the life to which he has called us? Do we spend time communing with him in prayer and worship that we might really know him?

Not only did the Hebrews not know the Lord, they didn’t know what he had done for Israel. The Lord had done so much for Israel- he had sent plagues upon the Egyptians so that his children could leave Egypt, he miraculously fed the Israelites in the wilderness, and when the Hebrews crossed the Jordan into the Promised Land, God gave the Canaanites into their hands. But, this generation knew nothing of their history and what great things God had done in that history.

Why did the Hebrews know neither the Lord nor the wonders he had done for them? The previous generation had been commanded to instruct their children. “These commandments that I give you today are to be upon your hearts. Impress them on your children. Talk about them when you sit at home and when you walk along the road, when you lie down and when you get up” (Deut. 6:6-7). When crossing the Jordan, twelve men were to erect a memorial (Josh. 4:1-6). Then we read, “In the future, when your children ask you, ‘What do these stones mean?’ tell them that the flow of the Jordan was cut off before the ark of the covenant of the LORD” (Josh. 4:6-7). Thus, the previous generation was to tell their children what the Lord had done for Israel.

It clearly seems that Joshua’s generation failed in their obligations to teach their children. Thus, their children did not know the Lord and they entered apostasy. Brethren, you know that we have an awesome responsibility to teach our children. “Train a child in the way he should go, and when he is old he will not turn from it” (Prov. 22:6). “Fathers, do not exasperate your children; instead, bring them up in the training and instruction of the Lord” (Eph. 6:4). Brethren, will we train our children, or are we going to turn the other way, not train them, and allow them to enter apostasy?

A teacher asked her Sunday school class, “Why do you love God?” The kids gave various answers, but finally, one little boy said, “I guess it just runs in our family.” Does loving God run in your family?

Notice how the historian describes the people’s apostasy: “They followed and worshiped various gods of the peoples around them.”

There’s a very important lesson for us here: we cannot just do what everyone else does. The majority of people in this world are going to go to hell. “Enter through the narrow gate. For wide is the gate and broad is the road that leads to destruction, and many enter through it. But small is the gate and narrow the road that leads to life, and only a few find it” (Matt. 7:13-14). Thus, if we do what the majority does, we’ll find ourselves on broad street, headed in the same direction as they.

We are called upon to be different than those around us. “If you belonged to the world, it would love you as its own. As it is, you do not belong to the world, but I have chosen you out of the world. That is why the world hates you” (Jn. 15:19). “Come out from them and be separate, says the Lord. Touch no unclean thing, and I will receive you” (2 Cor. 6:17).

Parents, there is a very important lesson here for us. The Israelites in this text entered forsook the Lord for two reasons: their parents did not teach them, and they allowed the world to infiltrate their homes. What are we going to do as parents? Will we instruct our children in righteousness and keep the world far from our homes? Or, will we not teach our children and allow them to live like the world?

In his anger, the Lord handed the Israelites over to raiders who plundered them.

We don’t like to think about it, but God becomes angry, and he can become very angry. “The wrath of God is being revealed from heaven against all the godlessness and wickedness of men who suppress the truth by their wickedness” (Rom. 1:18). “Let no one deceive you with empty words, for because of such things God’s wrath comes on those who are disobedient” (Eph. 5:6).

Raiders came against the Israelites who plundered them. The worship of Baal was supposed to protect one’s crops – if you worshiped Baal, you weren’t going to have any trouble raising your crops. I think God is purposefully using plunderers to go against the crops to say to the Israelites, “Don’t worship that pagan fertility god; you worship me.”

That the Israelites were able to have victory over their enemies established that God was with them. “This is how you will know that the living God is among you and that he will certainly drive out before you the Canaanites, Hittites, Hivites, Perizzites, Girgashites, Amorites and Jebusites” (Josh. 3:10)-Notice that God will be with the Israelites and he is the one who will drive out the inhabitants of Canaan. Notice Joshua 10:12-14 – especially notice the last sentence of verse 14: “Surely the LORD was fighting for Israel!”

But, because of the people’s sinfulness, God withdrew his help, and he gave them over to their enemies. We know that God would not help his people when they were sinful – Notice what God said to Joshua after Achan sinned and the Israelites could not capture Ai (Josh. 7: 10-12). God had promised that he would abandon his people if they were not faithful to him – in telling the Israelites what would happen if they were disobedient, Moses said, “The LORD will cause you to be defeated before your enemies. You will come at them from one direction but flee from them in seven, and you will become a thing of horror to all the kingdoms on earth” (Deut. 28:25).

There are two important lessons for us here:

The conclusion of this narrative is quite interesting. The Israelites were in great distress because of the punishment God was sending upon them. God, as he always does, responded to that distress – “the Lord raised up judges, who saved them out of the hands of these raiders.”

God still loved his people, and when they returned to him, he returned to them. Do you need to return to God this morning?