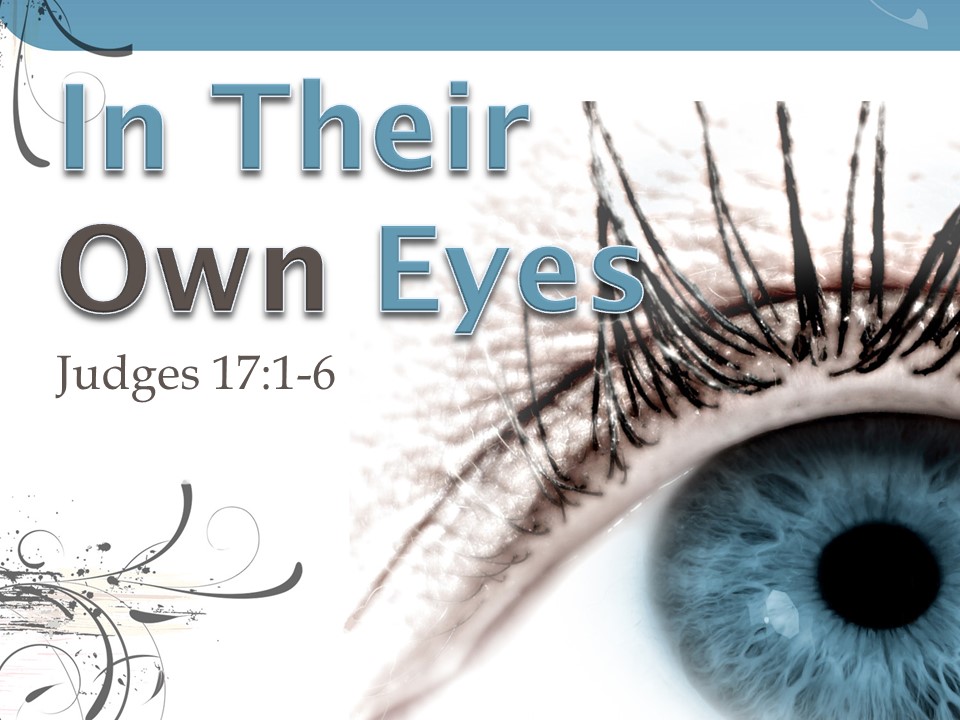 We live in a society where people are committed to doing what they themselves believe is right. We hear: “Do whatever makes you happy” or “You don’t need someone else’s permission to do what you feel is right.” Maybe you yourself at one time believed you could do what you believed was right. Part of our struggle with sin is wanting to do what we ourselves believe is right versus what God says is right.

Tonight, we want explore the sad period of the Judges and learn this lesson: “You do not determine what is right and wrong!”

Micah returns silver to his mother. Interesting fact: the name Micah means “One Who is Like the LORD,” yet Micah makes an idolatrous shrine.

When Micah returns the silver to his mother, she takes the money to a silversmith who casts it into metal. Images of any kind had been outlawed in Israel (Ex 20:4-6). For some reason, Micah’s mother goes ahead and has this idol cast. I find it interesting that Micah’s mother gives lip service to the LORD–she calls on YHWH to bless her son, but she disobeys His explicit instructions.

Aren’t there many folks who continue to do that very thing? They talk a good talk, but they can’t seem to do the right thing. Jesus said the scribes and Pharisees fit that category: Matthew 23:2-3. We must never fit that category: “He who says he abides in Him ought himself also to walk just as He walked” (1 Jn 2:6).

Micah had a shrine, made an ephod and teraphim, and installed one of his sons, who became his priest.

Why would Micah sin so grievously against the Lord? The author of Judges gives us a big clue: “In those days there was no king in Israel; everyone did what was right in his own eyes” (v 6). Micah–and the other Israelites–had no leadership to provide direction. Without a king, they were left to their own thinking.

The statement–“In those days there was no king in Israel”–occurs four times in the Book of Judges.

The entire Book of Judges is establishing the place of the monarchy established at the end of the period of Judges in 1 Samuel.

The period of the Judges is a very dark period in Israelite history. There is a cycle that repeats itself through this period–a concise statement of this cycle is found at Judges 3:7-12. That cycle:

Why did this cycle of sin and redemption play throughout the period of the judges? “In those days there was no king in Israel; everyone did what was right in his own eyes.”

This sad episode clearly teaches: “You do not determine what is right and wrong!” How do we apply that truth in our daily lives?

We must allow God to be the king of our lives.

We’ve read the text. The inspired word is that during the period of the Judges there was no king in Israel.

We know that’s only partially true. No, there was not an earthly king—that’s what the text means. Yet, the Israelites had the Lord God as their king. “The LORD shall reign forever and ever” (Ex 15:18). At the conclusion of the period of the Judges, Samuel is judging the nation. The people come to Samuel and asks for a king like all the other nations, and Samuel bemoans the people’s wish. God says to Samuel: “Obey the voice of the people in all that they say to you, for they have not rejected you, but they have rejected me from being king over them” (1 Sam 8:7). The people had a king, but they rejected Him.

What way do you need to submit to God in your life? What area of your heart is not fully submissive to the will of God? Let’s commit to doing everything in our power to submit to the mighty hand of God.

Understand that you do not determine what is right and what is wrong.

You and I are in absolutely no position to determine what is right and what is wrong. Only God can inform us of His will. Therefore, we need to turn to Scripture to learn the will of God for our lives. Psalm 119:9-11. “O LORD, I know the way of man is not in himself; It is not in man who walks to direct his own steps” (Jer 10:23).

Let’s commit to being people of the Book, so that we can know God’s will for our lives!

We must also pay attention to God-appointed leadership.

What happened during the period of Judges is all because the people of Israel didn’t respect God-appointed leadership, i.e. Himself. However, there is a real tendency for people to forget the leadership of God and to wander away from Him. The people in the time of the Judges did that. Pagans did that: “Even as they did not like to retain God in their knowledge, God gave them over to a debased mind, to do those things which are not fitting” (Rom 1:28).

I can’t help but wonder if that isn’t part of the reason that God has given elders in the church: Individuals who are physically here to help us remember the truths of God. In congregations with solid elderships, everyone can’t do what is right in his own eyes, for the elders help brethren stay faithful to Scripture. Let’s us commit to following the elders so that we do not do what is right in our own eyes.