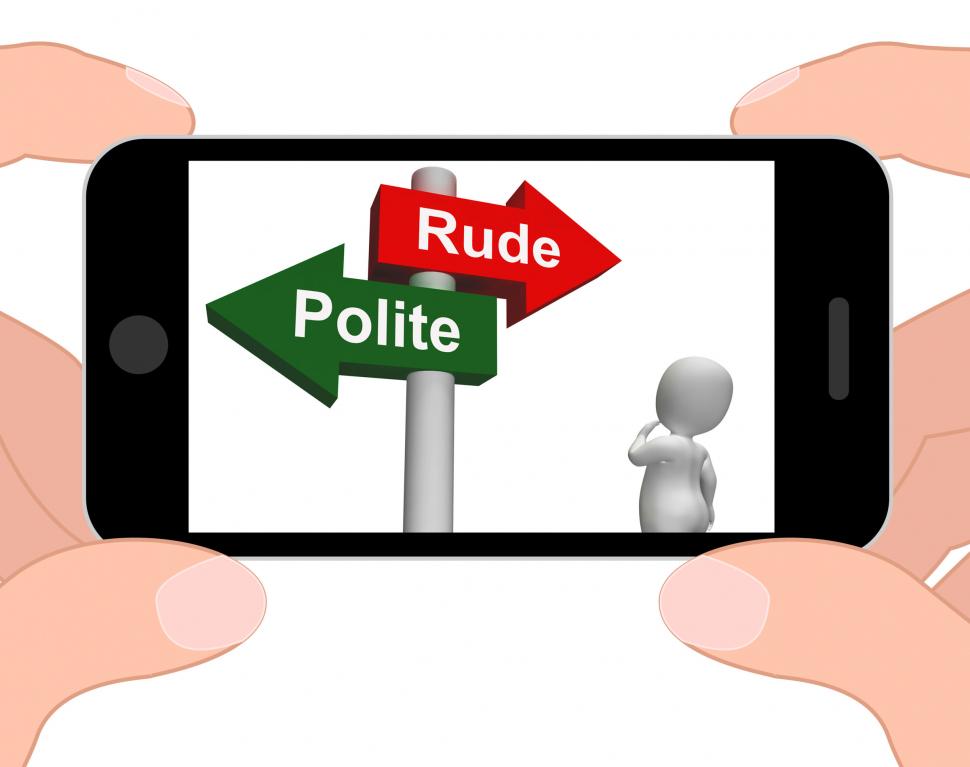 When Tammy was expecting Wil, we’d often go out to eat after church on Sunday. I remember going to TGI Friday’s one Sunday. I’d preached a little longer than usual on this Sunday and we got to Friday’s after many other churches had let out. That was okay, but it meant we were going to have to wait.

We didn’t mind waiting and went back out to the waiting area. There are several young, healthy guys sitting on the benches there and I bring my very expectant wife in there. Not a single one of those young men-not one-offers Tammy his seat. I don’t mind telling you that I was so angry I could barely see straight. If I had pulled a stunt like that when I was growing up, my Daddy would’ve had my head! We were taught that you give up a seat for a woman, if she’s expecting or not.

No doubt you’ve encountered rude people before. You’ve been waiting on the parking space at Walmart and just as you prepare to pull in, some young kid zips right in there. Maybe some of you have worked in customer service jobs and had to deal with rude, irate customers. Maybe you’ve dealt with a neighbor who was the epitome of rudeness. Perhaps, there’s an incident in your own life that brings embarrassment when you think of it, for you were far ruder than you should have been.

The title of this morning’s sermon is a play on words. “A Miracle of Respect.” Our text is about Jesus performing a miracle out of respect, but it’s almost a miracle to find respectful people today.

Jesus Christ oozes respect in this narrative. We’ll see in this text that Jesus shows respect in three ways. Yet, for Jesus, respect isn’t about being a Southern gentleman or minding your manners. For Jesus, respect is about service. Jesus greatly valued service. “For even the Son of Man came not to be served but to serve, and to give his life as a ransom for many” (Mk 10:45). The night He was betrayed, Jesus took up a towel and washed His disciples’ feet.

As disciples of Jesus, we must greatly value service. Mark 10:43-44. “If I then, your Lord and Teacher, have washed your feet, you also ought to wash one another’s feet” (Jn 13:14). In both those texts, Jesus connects our service with His service, His respect for others with our respect for others. We want to learn an important lesson this morning: “To be respectful is to be Christlike.”

There’s a wedding. Jesus, His disciples, and His mother are invited, and they go. We see the first way Jesus demonstrates respect: The fact that Jesus attends a wedding demonstrates that Jesus respects marriage. I believe I’ve mentioned this text and the respect Jesus shows marriage in every wedding I’ve performed. I’ve done so, because: One, It’s very true; and Two, Our society just doesn’t respect marriage anymore – high divorce rate, homosexual marriage, and the like.

God has always held marriage in high esteem. It’s God who created marriage (Gen 2:21-25). “Let marriage be held in honor among all, and let the marriage bed be undefiled” (Heb 13:4).

Jesus’ mother learns their host has run out of wine and she tells Jesus.

Jesus’ response to His mother sounds strange to our ears. We’ve likely never called our mothers “Woman” – that doesn’t wash in our society. But, in Jesus’ day, it was a term of respect. Jesus uses this form of address as He’s dying: “Woman, behold, your son!” (Jn 19:26).

Jesus doesn’t want to do the miracle. It’s not quite time to do miracles just yet. But, His mother is persistent and He does the miracle.

We see here the second way Jesus demonstrates respect: He respects His mother. Think of it this way: The Son of God performed His first miracle because His mama asked Him to. If the Creator of the Universe respects His mama, so should we! Respect for parents is so important. Ephesians 6:1-3. “Children, obey your parents in everything, for this pleases the Lord” (Col 3:20).

The ruler of the feast tasted the water that had been turned into wine and said that the wine Jesus had made was better than the other wine.

We see the third way Jesus demonstrates respect: He refuses to allow the bridegroom to be embarrassed. Weddings typically lasted for seven days in the ancient world. Running out of wine at a wedding was a major, major faux pas. Hosts were expected to have enough wine for all their guests to last seven days. This bride and groom would have been subject to jests for many, many years. Jesus doesn’t allow that embarrassment to take place – He serves this couple in respect and turns water to wine.

Respect for others is immensely biblical. Every person is made in the likeness and image of God; therefore, every person is worthy of respect. “So whatever you wish that others would do to you, do also to them, for this is the Law and the Prophets” (Matt 7:12). Is not treating others the way you want to be treated respect? I can’t tell you the times I’ve thought of this verse and let someone into traffic or held the door for someone.

“To be respectful is to be Christlike.”

Let’s think of ways we can demonstrate respect in the three areas Jesus did:

As we mentioned, the institution of marriage is under gross attack in our society. Many Christians are worried about the future of marriage – I am. Yet, there’s little I can do about gay marriage and high divorce except preach the gospel and pray for those in authority.

But, there is much I can do about respecting my own marriage. Both husbands and wives have an obligation to respect one another. “Wives, submit to your own husbands, as to the Lord” (Eph 5:22). “Likewise, husbands, live with your wives in an understanding way, showing honor to the woman as the weaker vessel” (1 Pet 3:7). Do at least one thing this week to show respect to your spouse.

We’ve already quoted Scripture that demonstrates the respect due our parents.

Young people: What is one thing you can do this week to show respect/honor to your parents?

Those of us who don’t live with our parents still have a duty to honor. How will we show honor this week? Phone call, card, maybe just say “Thanks for all you did.” Those of you who no longer have your parents with you can still show respect to your parents-e.g., If they were good, godly parents, live how they taught you.

How are you going to respect others this week? How will you serve those at the office, those at the grocery store, and those who cut you off in traffic?

“To be respectful is to be Christlike.” Throughout His life, Jesus respected His heavenly Father: “Jesus increased in wisdom and in stature and in favor with God and man” (Lk 2:52). How will you show respect to your Father this week?