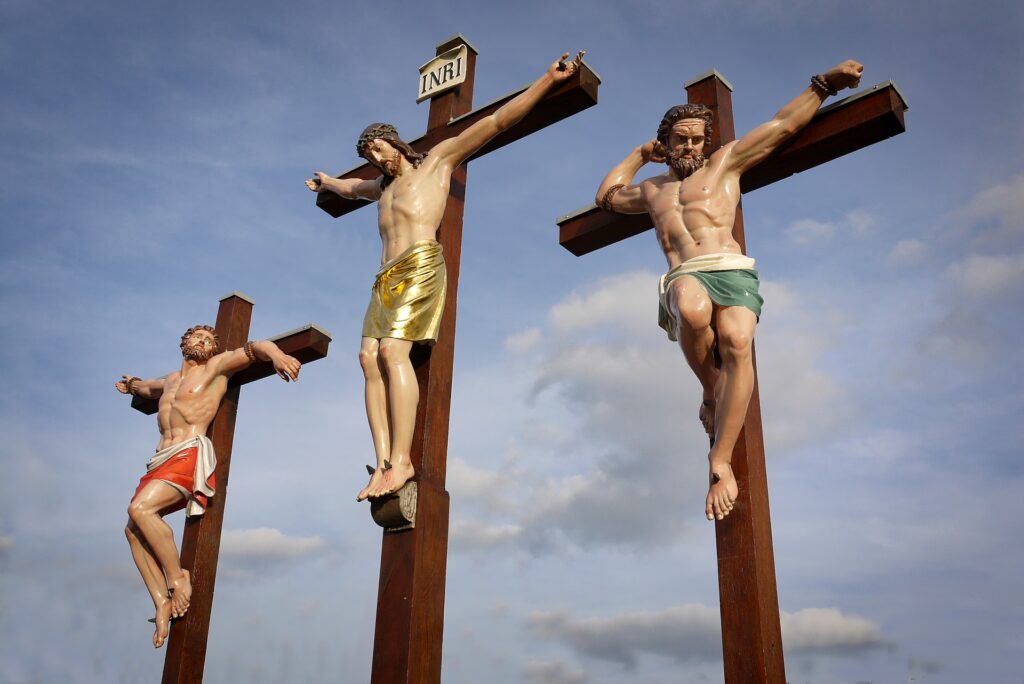 Mel Gibson’s The Passion of the Christ has sparked anew the debate about Jesus’ true killers. The charge has been made that the movie is anti-Semitic in that it portrays the Jews as killing Jesus. Rabbi Howard Abel Hirsch is quoted in the Denver Post: “Since the Romans were massacring Christians at the time when the gospels were written, there was a reluctance to antagonize them. Exonerate Pilate, a cruel political hack, portray him as a man of conscience, blame the Jews instead and inaugurate 19 centuries of Jewish persecution.” According to the St. Louis Post-Dispatch, the U. S. Conference of Catholic Bishops and the Anti-Defamation League obtained early versions of the script. Their concern was that Caiaphas (and, by extension, the Jewish people) convinced the helpless Pilate to crucify Jesus. In 1543, Martin Luther wrote in On the Jews and Their Lies, “Set fire to their synagogues or schools and . . . bury and cover with dirt whatever will not burn . . . raze and destroy houses; take away their religious books; give them no safe-conduct on the highways.”

Many Christians, on the other hand, see the film as a fairly accurate depiction of the hours prior to Jesus’ death.

Where does the blame lie? Who is it that killed Jesus?

Some People Did Kill Jesus

Judas was culpable in Jesus’ death.

Judas is the one who brought the Jewish hierarchy to Jesus so that they could arrest him. Judas had a greed problem – “He was a thief, and as he had the money box he used to take what was put into it” (Jn. 12:6). Because he could make a little money, he betrayed Jesus to the Jewish aristocracy.

Notice what John Chrysostom had to say: “Consider what befell him, how he simultaneously lost the money, committed the sin and destroyed his own soul. Such is the tyranny of covetousness. He did not even enjoy the money in his life, nor did he have any benefits in the life to come. He lost everything at once and, branded as a bad character even by his co-conspirators, hanged himself.”

The Jewish aristocracy was culpable in Jesus’ death.

The Jews wanted Jesus dead. “The Pharisees went out, and immediately held counsel with the Herodians against him, how to destroy him” (Mk. 3:6). Matthew 26:3-4.

They were finally able to get Jesus.

The Gospels present Jerusalem’s residents as playing a large role in Jesus’ death.

Christians understood the Jewish people to be culpable for Jesus’ death.

The Romans played a huge role in Jesus’ death.

Pilate was a coward, who could have stood up and defended Jesus, but he did not. Pilate took Jesus and scourged him (Jn. 19:1). When Jesus was silent, Pilate asked him, “You will not speak to me? Do you not know that I have power to release you, and power to crucify you?” (Jn. 19:10). Pilate “released for them Barabbas, and having scourged Jesus, delivered him to be crucified” (Matt. 27:26).

Did the Jews kill Jesus? The first century Jews did kill him, along with Judas and the Romans.

No One Killed Jesus

The Scriptures tell us that God gave Jesus and that Jesus freely gave his life.

God gave Jesus to die for the sins of the world.

Why did the Father give Jesus? Why did Jesus offer himself?

With all the debate raging about who really killed Jesus, we need to remember that Jesus died for you and for me. Mel Gibson wanted to portray this by having his own hands nail Jesus to the cross in The Passion.

The Roman soldiers shock the dice
As for the stake they vied,
Quite unaware that on the cross
The world’s Redeemer died.

The Roman soldiers shook the dice,
As for the stake they vied,
Are we as unconcerned as they
That Christ for us has died?