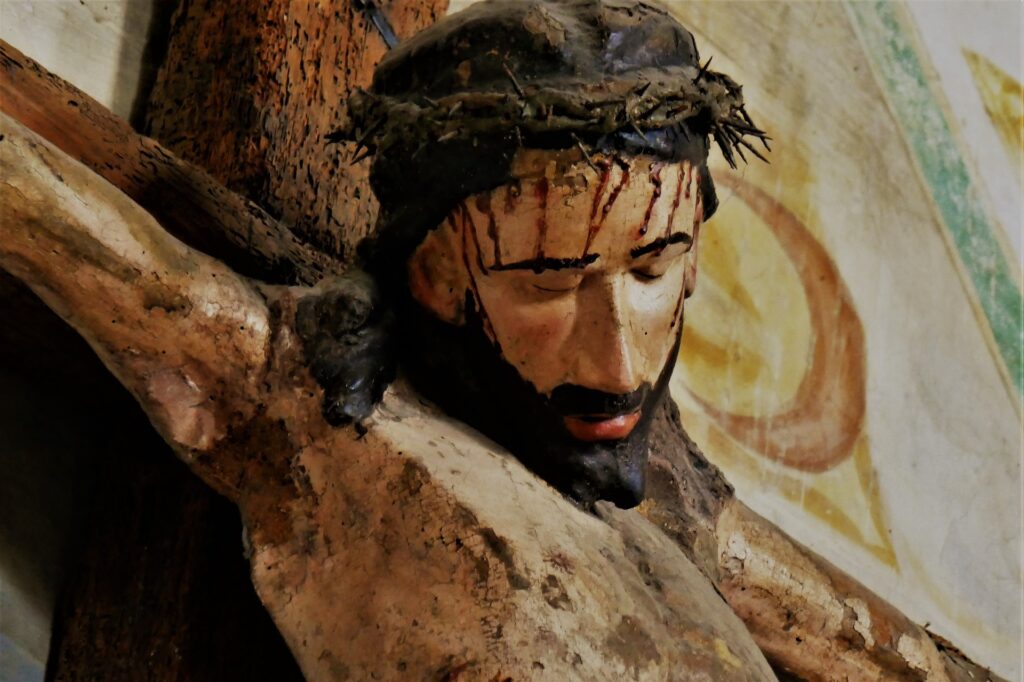 The Words of a Dying Man

In Shakespeare’s Richard I, the dying Duke of Lancaster tells the Duke of York: “O, but they say the tongues of dying men enforce attention like a deep harmony: Where words are scarce they are seldom spent in vain, for they breathe their words in pain.”

Indeed, you can learn much about a man by what he says in his last hours–where will his heart be? Will he speak words of comfort and love to his family? Will he plead with God for mercy after a life of sin?

This morning, we want to examine Jesus’ last words, the words he uttered from the cross. We have seven recorded statements the Lord made on the cross. Some have attempted to put these words in chronological order, yet that task is difficult at best, and we really have no way of knowing in which order our Lord spoke these words. We will study these words as they occur in canonical order, i.e., the order in which they appear in Scripture.

Jesus was a Forsaken Dying Man

“And about the ninth hour Jesus cried out with a loud voice, saying, ‘Eli, Eli, lema sabachthani?’ that is, ‘My God, my God, why have you forsaken me?’” (Matt 27:46). These words come from Psalm 22. Psalm 22 accurately portrays the sufferings Jesus would endure on the cross. In fact, many scholars believe that because he quoted from this psalm, Jesus may have meditated on this psalm during the crucifixion.

Our sins are so horrible that the Father turned his back on his Son. What sins have you committed which put Jesus on the cross? What have you done that caused the Father to forsake the Son?

Jesus was a Mediating Dying Man

Isaiah prophesied that Jesus would pray for transgressors (Is. 53:12).

Those who crucified Jesus did not know what they were doing. “Had they known, they would not have crucified the Lord of glory” (1 Cor. 2:8).

This prayer puts Jesus in the role of a mediator. The New Testament teaches that Jesus is a mediator:

Jesus stands before God’s throne and make intercession for sinners.

Jesus was a Saving Dying Man

To the penitent criminal, Jesus said, “Assuredly, I say to you, today you will be with Me in Paradise” (Lk 23:43).

“Paradise” is a word of Persian origin. The Persians used the word to describe a beautiful garden. In the Old Testament, the term describes the Garden of Eden. The term then came to be used of the place where the righteous await judgment. This is the same place described as Abraham’s bosom (Lk. 16:19-31). Abraham told the rich man that Lazarus was comforted (Lk. 16:25). The description of the place of torment shows just what a paradise this is. The tree of life is in the midst of the Paradise of God (Rev. 2:7).

This tells us that Jesus was thinking of others in his dying moments. Although Jesus was dying, he still had time to save this criminal.

Jesus can save us because of what he did on the cross.

Jesus was a Crying Dying Man

“Then Jesus, calling out with a loud voice, said, ‘Father, into your hands I commit my spirit!’ And having said this he breathed his last” (Luke 23:46). This quotation is a prophecy from Psalm 31:5.

This cry shows Jesus’ trust and confidence in the Father. The spirit returns to God “who gave it” (Eccl. 12:7). Jesus knew that he did not need to worry about his soul–God would take care of him. As we prepare to die, we can die in the same confidence Jesus had.

Jesus was an Honoring Dying Man

By the time of Jesus’ crucifixion, Joseph is undoubtedly dead. Jesus more than likely became a carpenter and provided the family’s income after Joseph died. Since Jesus had provided for his mother, he wanted to be sure she was cared for after he ascended.

Jesus could have chosen one of his brothers to care for Mary. Yet, his brothers were unbelievers at this point. More than likely, Jesus chose John so that his mother would be cared for by a believer.

Jesus was a grown man out on his own when he spoke this-We are to honor parents regardless of how old we are.

Scripture teaches us to honor our parents.

Are you honoring your parents?

Jesus was a Thirty Dying Man

Jesus said, “I thirst” so that the Scriptures could be fulfilled (Jn 19:28). This was a prophecy from Psalm 69:21. Jesus wanted to be sure that he fulfilled every prophecy concerning the Messiah.

The flogging Jesus endured often led to hypovolemic shock. This shock occurs when someone loses much blood. One effect of this shock is a great thirst, for the body craves fluid to replace the missing blood. This shows us that Jesus, not only fulfilled a Messianic prophecy, but that he also suffered a great deal. Jesus suffered this much because of our sins.

Jesus was a Finished Dying Man

Jesus said, “It is finished,” and gave up his spirit (Jn. 19:30). This is a cry of triumph rather than defeat. Jesus has accomplished all he came to accomplish. In the Sermon on the Mount, Jesus said, “Do not think that I came to destroy the Law or the Prophets. I did not come to destroy but to fulfill” (Matt. 5:17). Jesus was now finished. He had completed his role as Savior. Jesus could now die in triumph.

Jesus died because of our sins.

“Those who are Christ’s have crucified the flesh with its passions and desires” (Gal. 5:7). Just as Jesus died for our sins, we are to die to ourselves and live for him. Have you died to yourself?