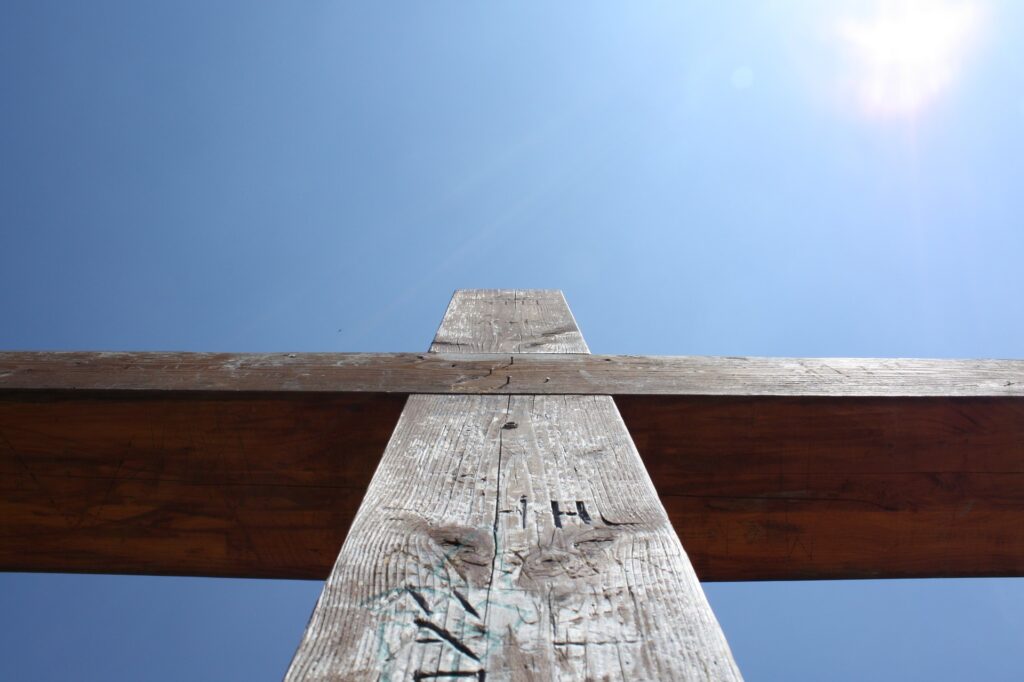 Several people did watch Jesus die. The soldiers watched Jesus die, the Jewish leaders watched him die, his mother watched him die. We want to focus on one group of men this morning who watched Jesus die–the centurion and those with him. “So when the centurion and those with him, who were guarding Jesus, saw the earthquake and the things that had happened, they feared greatly, saying, ‘Truly this was the Son of God!’” (Mt. 27:54). Just what things had they seen that caused them to exclaim this? We can’t get into their minds and know exactly why they exclaimed this. But, we can examine Scripture to see what they saw. This morning we want to do just that. May we, too, exclaim, “Truly, this was the Son of God!”

The soldiers gave Jesus sour wine mingled with gall, but he would not drink it. It was the custom to give the criminal spiked wine right before he was raised on the cross. This custom is said to have originated with the Jews and not with the Romans. This mixture of wine mingled with gall and myrrh was intended to dull the sense of pain of those being crucified; this mixture would calm the nerves and shorten one’s life. Jesus declined this mixture, because it was God’s will that he suffer.

Jesus willingly suffered for our sins.

Jesus did not want his mind confused while he died for man–He wanted to have a nee mind so that he could think of those of us whom he was dying to save.

The centurion and those with him must have been struck by this. Any normal person would have accepted the drugs to lighten the torment he was about to endure. But, not Jesus, because he was the Son of God, he refused these drugs.

Jesus suffered for you.

They Saw Darkness Over the Whole Land, Matthew 27:45

For three hours–from noon until three in the afternoon–there was darkness over the whole land. This darkness could not have resulted from an eclipse, of the moon was always full on the first day of the Passover. Whether the darkness was over the whole world, or simply all of Palestine, is uncertain, because the same expression would have been used for either meaning. Darkness was typical of the powers of darkness which seemed to be prevailing, it was also typical of the great sufferings of the atoning for sin and the dark hour of sin and depravity that could crucify God’s Son. “Well might the sun in darkness hide, And shut his glories in, When Christ, the mighty Maker, died For man, the creature’s sin.”

This was unusual–the sun does not stop shining when someone dies. When someone dies, the world goes on, and nothing stops. Yet, when Jesus died, the sun stopped shining–this shows just how different he was; he was the Son of God.

Jesus spoke forgiveness for those who were crucifying him. He said, “Father, forgive them, for they do not know what they do” (Lk. 23:34). Although this prayer is only mentioned by Luke, it is consistent with the life of Jesus. Luke goes to great trouble to show the graciousness of Jesus, and here he records just how gracious Jesus was. This prayer accords well with Jesus’ own teaching- “I say to you, love your enemies” (Mt. 5:44). Isaiah prophesied of this event-He “made intercession for the transgressors” (Is. 53:12). Jesus came to offer himself as a sacrifice for sins; through his offering himself a sacrifice for sin, he is able even to forgive those who crucified him.

Those who crucified Jesus did not understand what they were doing. Peter told the Jews, “I know that you did it in ignorance, as did also your rulers” (Acts 3:17). “Had they known [what they were doing], they would not have crucified the Lord of glory” (1 Cor. 2:8). Though ignorance is not an excuse for sin (Acts 17:30), their ignorance may have mitigated their sin.

If Jesus could forgive those who crucified him, he can forgive us of any sin we commit. Acts 13:38-39. “In whom we have redemption through His blood, the forgiveness of sins” (Col. 1:14). When Peter told the Jews they had crucified the Messiah, they asked what they should do. He told them to repent and be baptized; he offered them forgiveness. He didn’t say, “You crucified God’s Son. There’s no hope for you.”

If God forgave those who killed his Son, he will forgive you. You haven’t done anything so horrible as physically crucify God’s Son. J. W. McGarvey was studying with a woman when suddenly the woman said that God would never forgive her; McGarvey told her, “If God could forgive those who killed Jesus, he can forgive you.” Has God forgiven you of your sins?

The centurion and those with him recognized this was different. Ordinary men would be cursing those who killed them. But, God’s Son spoke forgiveness.

Jesus also spoke forgiveness to the thief on the cross. After the thief asked Jesus to remember him when he came into his kingdom, Jesus told him, “Assuredly, I say to you, today you will be with Me in Paradise” (Lk. 23:43). Paradise is a Persian word meaning a walled garden. When a Persian king wished to do one of his subjects a very special honor he made him a companion of the garden which meant he was chosen to walk in the garden with the king. Although the term is used elsewhere in the New Testament to refer to heaven, here “Paradise” refers to the place where the righteous await the Judgment. We know this can’t be heaven, because Jesus didn’t go to heaven when he died. After the resurrection, Jesus told Mary Magdalene, “Do not cling to Me, for I have not yet ascended to My Father” (Jn. 20:17). Peter quotes David who spoke about Jesus- “You will not leave my soul in Hades” (Acts 2:27). The Paradise spoken of here is Abraham’s bosom where Lazarus was after he died (Lk. 16:19-31). In that place, Lazarus was comforted (Lk. 16:25).

This gives us hope for deathbed conversion. As long as a person has the breath of life in him, he can come to Jesus-it’s never too late, as long as we’re alive, to come to Jesus. But, we shouldn’t wait until we’re on our deathbed to obey Jesus. “Behold, now is the accepted time; behold, now is the day of salvation” (2 Cor. 6:2). We can say we’re going to obey Jesus, but never do so. Felix told Paul, “Go away for now; when I have a convenient time I will call for you” (Acts 24:25). As far as we know, Felix never found that “convenient time.” So many people are on their deathbeds before they know what happened–a car accident takes their life, a heart attack causes them to die, some disease that starts out minor becomes serious and they die quickly. Don’t wait until you’re on your deathbed–do something today.

Many claim that they don’t need to be baptized, because this thief was not baptized. You can’t prove the thief wasn’t baptized, for John the Baptist baptized many. This thief lived and died under the law of Moses. Jesus nailed the Old Testament to the cross when he died (Col. 2:14). In order for the New Testament to become effective, Jesus had to die (Heb. 9:16-17). Baptism wasn’t required under the Old Testament. When Jesus was on earth, he had the authority to forgive sins. “The Son of Man has power on earth to forgive sins” (Lk. 5:24). When Jesus was on this earth, he could do what he wanted–he healed the sick, he helped the lame walk, he raised the dead, and he doesn’t do that anymore. Why be surprised he doesn’t save people this way anymore?

Jesus will save you. Jesus “loved us and washed us from our sins in His own blood” (Rev. 1:5). “We believe that through the grace of the Lord Jesus Christ we shall be saved” (Acts 15:11). But, this salvation is only possible to those who obey Jesus- “He became the author of eternal salvation to all who obey Him” (Heb. 5:9). Have you obeyed Jesus for your salvation?

This centurion and those with him realized that this had to be God’s Son, for only God’s Son could forgive sins.

They Heard What Jesus Said When He Died

Jesus cried out with a loud voice and died. When the centurion saw that he cried out in this way, he said, “Truly this Man was the Son of God” (Mk. 15:37-39). Mark doesn’t tell us what Jesus said before he died. Yet, Luke does–the last thing Jesus said before his death was, “Father, ‘into Your hands I commit My spirit’” (Lk. 23:46). Jesus could put his faith and confidence in God. He didn’t have to worry about death or his soul–he knew that God would graciously take care of him.

We can have that same confidence. Jesus released “those who through fear of death were all their lifetime subject to bondage” (Heb. 2:15). “These things I have written to you who believe in the name of the Son of God, that you may know that you have eternal life” (1 Jn. 5:13). Eternal life is not something we must doubt–it is something we can know with certainty. If we are faithful to God, he will save us. Do you have this confidence? Do you know that you have a home in heaven?

Because of what the centurion and those with him saw, they exclaimed, “Surely, this was the Son of God!” Indeed he is–he lived and died as no other.