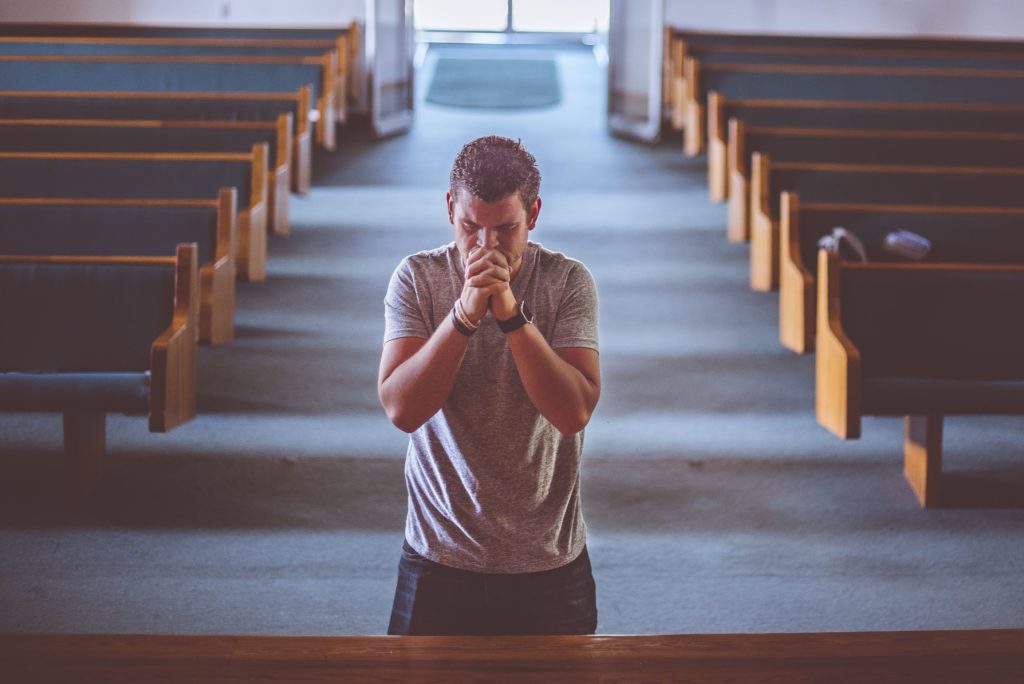 A kindergarten class went to the fire station for a tour and some instruction on fire safety. The fireman was explaining what to do in case of a fire. He said, “First, go to the door and feel the door to see if it’s hot.” Then he said, “Fall to your knees. Does anyone know why you ought to fall to your knees?” One of the little tykes said, “Sure, to start praying to ask God to get us out of this mess!”

We tend to find ourselves in all kinds of messes in this life. Perhaps we spend the night in prayer because a dear loved one is about to leave this world. Perhaps we spend the night in prayer because our marriage is on the verge of collapse. Perhaps because our employer just said that because of budgetary difficulties, we need to find other employment, or perhaps because some unkind word or deed wounded our spirit deeply, or perhaps because we have sinned against God’s holiness in an incomprehensible way. Sooner or later we will find ourselves in a mess needing divine intervention.

The placement of this chapter in Isaiah is quite informative. This chapter takes place several years before Sennacherib’s invasion, which is recounted in the two previous chapters. Chapter 40 onward discusses the coming captivity in Babylon. Why place this chapter right in the middle of these two sections, out of chronological order? The Holy Spirit seems to have directed this chapter be placed here to serve as a reminder to the Israelites of the power of prayer. In other words, Hezekiah provides an example for the Israelites of what can happen when people pray: Sennacherib couldn’t touch Jerusalem, and the Babylonians couldn’t have taken the people captive if only they had prayed and confessed their sin.

Let us look at the prayer of the righteous.

Hezekiah was extremely ill, and Isaiah came to him and said, “This is what the LORD says: Put your house in order, because you are going to die; you will not recover.”

At this point, Hezekiah has no heir-if Hezekiah dies, David’s line is going to come to an end.

At this point in God’s revelation, the Lord hasn’t revealed much at all about the afterlife. You get a glimpse of how little those in the Old Testament knew of the afterlife from Hezekiah’s psalm after his recovery – “The grave cannot praise you, death cannot sing your praise; those who go down to the pit cannot hope for your faithfulness. The living, the living – they praise you, as I am doing today; fathers tell their children about your faithfulness.” The clearest reference to the resurrection in the Old Testament comes from Daniel 12, a book written during the Babylonian Captivity, years after Hezekiah’s death.

The Lord tells Hezekiah to get his affairs in order. We’ve all heard sermons from this passage about the need to get our souls right before our deaths. There is no more important task on this earth than making sure we are ready to enter eternity. Jesus reminded us that’s the most important thing in this life: “What good will it be for a man if he gains the whole world, yet forfeits his soul? Or what can a man give in exchange for his soul?” (Matt. 16:26).

But, in context this admonition has to do far more with Hezekiah’s making sure all the royal duties in his house were discharged, making sure that his will and other articles were prepared. Hezekiah was probably being encouraged to do something quite analogous to what David did in l Kings 2: l-9 where he gave instructions to Solomon.

Hezekiah desperately needed to pray. Hezekiah apparently became ill because he had sinned. 2 Chronicles 32:24-26. Notice also Hezekiah’s prayer of confession in verse 17 – “Surely it was for my benefit that I suffered such anguish. In your love you kept me from the pit of destruction; you have put all my sins behind your back.”

Hezekiah provides us a powerful reminder of our need to pray and confess sin. “The prayer offered in faith will make the sick person well, the Lord will raise him up. If he has sinned, he will be forgiven. Therefore confess your sins to each other and pray for each other so that you may be healed. The prayer of a righteous man is powerful and effective” (Js. 5:15-16). You also remember what Simon was told after he attempted to buy the Holy Spirit – “Repent of this wickedness and pray to the Lord. Perhaps he will forgive you for having such a thought in your heart”‘ (Acts 8:22).

Prussian King Frederick the Great was once touring a Berlin prison. The prisoners fell on their knees before him to proclaim their innocent – except one man who remained silent. Frederick called to him, “Why are you here?” “Armed robbery, Your Majesty,” was the reply. “And are you guilty?” “Yes, indeed, Your Majesty, I deserve my punishment.” Frederick then summoned the jailer and ordered him, “Release this guilty wretch at once. I will not have him kept in this prison where he will corrupt all the fine innocent people who occupy it.”

Do you need to stop claiming innocent and confess sin to God this morning?

Hezekiah also reminds us of our need to pray for the sick. “Is any one of you sick? He should call the elders of the church to pray over him and anoint him with oil in the name of the Lord. And the prayer offered in faith will make the sick person well” (Js. 5:14-15). As I’ve said before, I’m absolutely persuaded that the healing here was not due to miraculous power on the elders’ part. Prayer is doing the healing here, not the laying on of hands or a pronouncement to be made well. Not all elders in the first century would have had the miraculous power of the Spirit anyway, and James doesn’t say, “Call for an elder with miraculous gifts”, he says, “Call for the elders.”

I believe this text is as valid today as it was then. When I or my family face serious illness, the first thing I’m going to do is call for the elders to anoint us with olive oil and pray over us. How much do we put faith in prayer? How much do we pray for those who are sick? How much do we expect God to make them well?

Notice the heart Hezekiah exhibited when he prayed. Hezekiah turned his face to the wall and prayed to the LORD, “Remember, O LORD, howl have walked before you faithfully and with wholehearted devotion and have done what is good in your eyes.” And Hezekiah wept bitterly.

Hezekiah didn’t come before God and say a rote prayer, but he poured his heart out to the Lord.

Hezekiah reminded the Lord of how he had walked faithfully with wholehearted devotion and done what was good in God’s eyes. Hezekiah certainly had – he was one of the best kings Judah ever saw (2 Ki. 18:5-6). How could Hezekiah walk so faithfully and then sin in such a way that God was ready to kill him? The same way David did. David was a man after God’s own heart, but he committed adultery and had her husband killed to cover up his sin. The same way Peter did. Peter was the first to proclaim the gospel to both Jew and Gentile, but he lied in denying he knew Jesus. The same way you and I do. I know I try to do right, but so many times I fall on my face and fail in a big way.

The tax collector had such a heart. “The tax collector stood at a distance. He would not even look up to heaven, but beat his breast and said, ‘God, have mercy on me, a sinner'” (Lk. 18:13). The Lord heard and honored his prayer because it came from a good heart.

Jesus encouraged us to have a heart of prayer – “When you pray, go into your room, close the door and pray to your Father, who is unseen. Then your Father, who sees what is done in secret, will reward you” (Matt. 6:6).

Jesus had such a heart of prayer. Jesus’ heart was breaking as he went to pray – He told the disciples, “My soul is overwhelmed with sorrow to the point of death” (Matt. 26:38). “My Father, if it is possible, may this cup be taken from me. Yet not as I will, but as you will” (Matt. 26:39).

When we pray, how do we pray? Do we pour our hearts before God? Do you need to pour your heart before God this very day?

The word of God then came to Isaiah, “Go and tell Hezekiah, ‘This is what the LORD, the God of your father David, says: I have heard your prayer and seen your tears: I will add fifteen years to your life.'”

From the account in 2 Kings, we know that Isaiah had left Hezekiah’s presence and was leaving the temple when the word of the Lord came to him again – “Before Isaiah had left the middle court, the word of the LORD came to him” (2 Ki. 2034). Think about that for a moment: Isaiah had delivered to Hezekiah the word God told him to deliver, and he was on his way home. God says, “Isaiah, not so fast. Get back in there and tell Hezekiah I’ve changed my mind.”

That’s the power of prayer – power to appeal to God and ask for his intervention in our lives! You remember the words of Jesus: “Ask and it will be given to you: seek and you will find; knock and the door will be opened” (Lk. 11:9). Do you remember the words of James? “You do not have, because you do not ask God. When you ask, you do not receive, because you ask with wrong motives, that you may spend what you get on your pleasures” (Js. 4:2-3). James doesn’t say, “You pray and pray, but you don’t get because God’s not powerful.” He says, “You don’t get because you don’t ask.” James then adds: “When you do ask, you ask with the wrong motives.”

While crossing the Atlantic on an ocean liner, a preacher was asked to address the first class passengers. At the captain’s request he spoke on “Answered Prayer.” An agnostic who was present at the service was asked by his friends, “What did you think of the sermon?” He answered, “I didn’t believe a word of it.”

That afternoon the preacher was asked to address some passengers. Many of the listeners at the morning service also went along, including the agnostic, who claimed he just wanted to hear what the guy had to say.

After the meeting, he saw the old lady happily eating one of the pieces of fruit. “You seem to be enjoying that orange,” he remarked with a smile. “Yes, sir,” he replied, “My Father is very good to me.” “Your father? Surely your father can’t be still alive?” “Praise God,” she replied, “He is very much alive.”‘ “What do you mean?” pressed the agnostic. She explained, “I’ll tell you, sir. I have been seasick for days. I was asking God somehow to send me an orange. I suppose I fell asleep while I was praying. When I awoke, I found he had not only sent me one orange but two!”

God provided Hezekiah a sign that he would honor the prayer. Sunlight would go back the ten steps it had gone down on the stairway of Ahaz. This must have been some manner of measuring time – the Babylonians measured time in a similar manner. God performed a miracle to establish his Word.