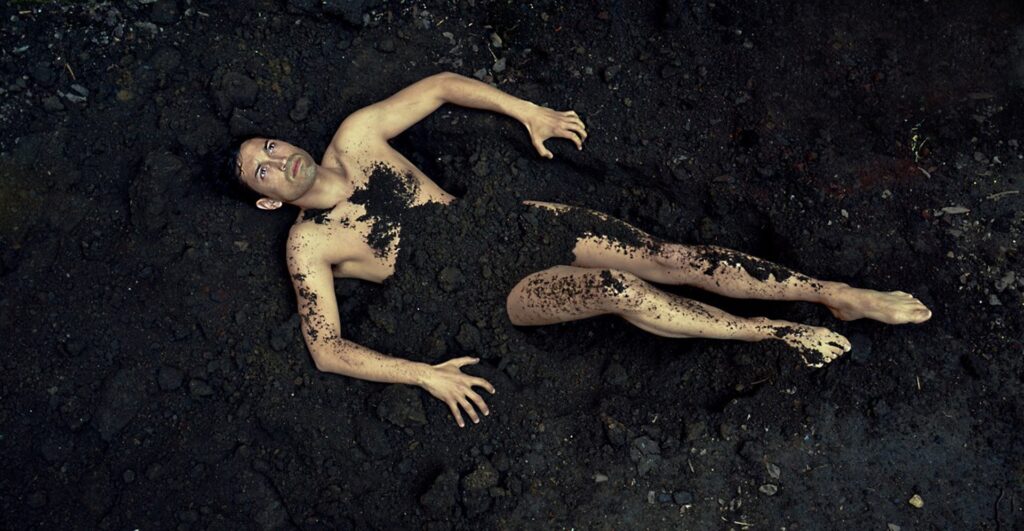 Jim Cunningham published a book which was picked up in a Fox News story just this month. His book is entitled Nudity and Christianity. Cunningham uses many scriptural citations in an attempt to show that nudity is perfectly natural and is not lewd. Cunningham has said, “There’s a lot of references in the Bible to being naked. In the early church, all Christians were baptized naked-men, women, and children. It wasn’t an issue. My point is that the church, instead of changing the world, has let the world change it. It’s accepted Larry Flynt’s definition of the body, instead of the Bible’s. If the body is what the Bible says it is-the temple of the Holy Spirit and the image of God-then modesty doesn’t mean always covering up, it just means comporting yourself in a way that does not cause lust in others.” The interesting thing about Cunningham’s writing this book on nudity? He’s blind!

Obviously, the Bible does not take the position that Cunningham has attempted to take. Prior to their sinning in the Garden, Adam and Eve “were both naked, and they felt no shame” (Gen 2:25). After disobeying God, they were ashamed of their nakedness, made makeshift clothing for themselves, and it was God who made them clothing (Gen 3:21). If God approved of casual nudity, why would he have made clothing for the man and woman? In using the body metaphor to discuss different roles in the church, Paul writes, “The parts that are unpresentable are treated with special modesty, while our presentable parts need no special treatment” (1 Cor 12:23-24).

It is important that we dress appropriately. You recall, no doubt, the words of Jesus concerning adultery-“I tell you that anyone who looks at a woman lustfully has already committed adultery with her in his heart” (Matt 5:28). Some people say, “If someone looks at me lustfully, that’s his or her problem, not mine.” It’s true that we cannot control what people think, and we are not responsible for what people think. If people lust, that is their problem. However, we are told not to put stumbling blocks in the way of others: “If anyone causes one of these little ones who believe in me to sin, it would be better for him to have a large millstone hung around his neck and to be drowned in the depths of the sea” (Matt. 18:6).

However, in our text this evening, we’re not concerned with issues of modesty or immodesty: We’re concerned with the command of God. “The LORD spoke through Isaiah son of Amoz. He said to him, ‘Take off the sackcloth from your body and the sandals from your feet.’ And he did so, going around stripped and barefoot” (v. 2).

This is admittedly a very strange text. God has often asked people to do things we’d find strange. Abraham was to take his son upon a mountain and sacrifice him as a burnt offering before the Lord. Yeah, God stopped the sacrifice, but Abraham didn’t know God was going to. Hosea went and married a prostitute because God told him to do so. God was going to compare his people to an unfaithful wife, and he needed an object lesson in Hosea and Gomer.

This is a strange text. Isaiah was to walk around naked for three years. Even though the text is strange and not what we’re accustomed to reading in Scripture, there is much we need to learn.

This oracle came to Isaiah in the year that Sargon, king of the Assyrians, was on the march through what we call today the Middle East. That’s very important to understanding this text; understanding the context helps us to grasp God’s strange request. Before we place this request in context, let’s think about that request and Isaiah’s response to it.

God came and told Isaiah, “Take off the sackcloth from around your waist and the sandals off your feet.” Sackcloth was a coarse material that people in the ancient world often wore in times of grief; it often fastened around the waist and left the breasts bare so that they could be beaten. Sackcloth and ashes came to be synonymous grief and repentance. Probably because of its association with repentance and the grief over one’s sin, prophets often wore sackcloth.

The real question among many scholars is whether or not Isaiah was totally naked or if he simply took off his outer garment. Whereas some people in the ancient world might wear little clothing, the Jews were a very modest people and they abhorred any form of public nudity. The men would often wear an undershirt which came down to about the ankles and they then wore a cloak on top of that.

Wearing just the undershirt was considered immodest. When David danced before the ark of the covenant without his outer cloak, Michael, the daughter of Saul, said to him, “How the king of Israel has distinguished himself today, disrobing in the sight of the slave girls of his servants as any vulgar fellow would!'” (2 Sam 6:20). When Simon Peter was fishing after the Resurrection, he wrapped his cloak back around himself before jumping out of the boat to see Jesus (Jn. 21:7); the King James Version says that he was naked. Most scholars say, therefore, that Isaiah was not immodest according to God’s standards, only the standards of the Jews, by removing his outer garment.

Those scholars may be right, but I personally tend to think that Isaiah didn’t wear anything for the three years that he went around stripped and barefoot. The Hebrew word used here most often means completely nude. It is used that way in Genesis 2:25: “The man and his wife were both naked, and they felt no shame.” It is also used that way in Job 1:21: “Naked I came from my mother’s womb, and naked I will depart.” Obviously the first use of “naked” in the text means nude.

Prisoners of war were often carried away completely nude to shame and humiliate them. Isaiah 47:2-3. Nahum 3:5 (this is an oracle against Nineveh concerning coming captivity). Since Isaiah would show through his actions how the Egyptians and Ethiopians would be carried off, it’s hard to imagine how he could have done so if he weren’t nude.

In a very real sense, however, whether Isaiah was completely nude or simply was considered nude because he did not conform to Jewish standards of decency is, in some respect, irrelevant. What’s important is his response to the command. What did Isaiah do when God commanded him to strip his clothing and his shoes? “He did so, going around stripped and barefoot.” Can you imagine some of the excuses that Isaiah might have given not to obey? “Lord, I know why you want me to do this, but my mother lives next door, and I just can’t.” “Lord, I’m shy. I don’t think I can go for three years without being decent.” “God, do you know where my feet have to go? Do you really expect me to go barefoot?” Yet, Isaiah obeyed the word of the Lord.

What might we say if God asked us to do something so strange? I’ve got to tell you that I’d have a lot of reservations. “God, can’t I at least wear a coat when it’s raining or snowing or around zero?” “God, please let me where my shoes!” “Look, I might step on some glass or a bee or step in chewing gum.” “Lord, what am I going to do if we go to Walmart and I need to use the restroom? I’m not going in a public restroom without shoes.” I’ve got issues with public restrooms to begin with, and if I couldn’t wear shoes, I don’t think I could handle them at all.

God hasn’t asked us to go around naked, but he has asked us to obey him. “The LORD your God commands you this day to follow these decrees and laws; carefully observe them with all your heart and with all your soul” (Deut 26:16). Samuel told Saul when he took spoil from the Amalekites to sacrifice, “Does the LORD delight in burnt offering sand sacrifices as much as in obeying the voice of the LORD? To obey is better than sacrifice, and to heed is better than the fat of rams” (1 Sam 15:22).

Isaiah walked around naked and barefoot for three years to demonstrate that the King of Assyria would lead away the Egyptians and the Ethiopians naked and barefoot to captivity. The New International Version reads “Cush” and “Cushites,” the literal Hebrew, but today it’s Ethiopia, so several translations place the modern name there.

At the time the Assyrians lead away the Egyptians and Ethiopians, God says, “Those who trusted in Cush and boasted in Egypt will be afraid and put to shame. In that day the people who live on this coast will say, ‘See what has happened to those we relied on, those we fled to for help and deliverance from the king of Assyria! How then can we escape?”

Here’s why Isaiah was to walk around naked and barefoot for three years: The Assyrians were on the march kinda like the Nazis in the first days of World War II; they are conquering everything. If they invade a country, they take it; they’re too strong militarily for anyone to do anything about. Several nations-referred to in the text as “the people who live on this coast,” i.e., the Philistines, the Edomities, the Moabites, and the Judeans-were discussing joining an alliance with the Egyptians and Ethiopians, two ancient superpowers, to protect themselves against the Assyrian threat. Isaiah’s point is: “Look, if you trust in the Egyptians and the Ethiopians, you are going to be sorely disappointed, for they are going into Assyrian Captivity. When they go into captivity, what’s going to happen to your coalition? You need to trust in God and not in these foreign powers.” Apparently King Hezekiah and the people of Judah followed Isaiah’s counsel, for there is no mention of the Assyrians invading the southern kingdom.

We need to learn the same lessons the southern kingdom needed to learn: to trust in God and not in men. Scripture counsels us to place our confidence in God. “It is better to take refuge in the LORD than to trust in man” (Ps 118:8). “Trust in the LORD with all your heart and lean not on your own understanding” (Prov 3:5).

Where is our trust-in God or in man? As the presidential election begins to heat up, do we think, “I sure hope so-and-so wins so I’ll be better off financially,” or do we trust in God to provide our needs? When the doctor gives us a diagnosis we don’t like, do we want the best doctor or the most powerful God? When we face some crisis, do we go to friends to help us through or do we rely on the Friend of tax collectors and sinners?