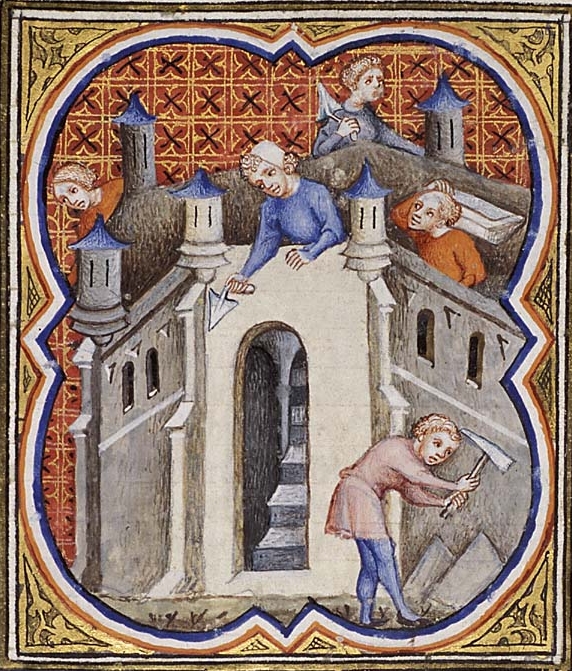 George W. Boschke was the famous engineer who built the gigantic sea wall to protect Galveston, Texas, from the horrible floods which had brought disaster to the city. He built his sea wall with a sure confidence of an engineer and a master workman. From Galveston he went to Oregon to build railroads in an undeveloped section of the state.

Boschke was in a camp forty miles away from the nearest railroad when an exhausted messenger rode in and handed a telegram to his assistant. The message said that the Galveston sea wall had been washed away by a furious hurricane. The assistant was in consternation and dreaded to hand the telegram to his chief. Boschke read the telegram, smiled, handed it back and said, “The telegram is a lie. I built that wall to stand.”

He turned away and went about his work. It turned out that the message was based on a false report. True, there had been a hurricane as severe as that which had flooded the city before, but Boschke’s sea wall had not moved. It stood firm.

Although Boschke’s sea wall stood firm, Solomon’s temple did not. The temple’s destruction was prophesied – “Therefore because of you, Zion will be plowed like a field, Jerusalem will become a heap of rubble, the temple hill a mound overgrown with thickets” (Mic. 3:12).

The temple was destroyed with fire. The Babylonians “set fire to God’s temple and broke down the wall of Jerusalem; they burned all the places and destroyed everything of value there” (2 Chr. 26:19). “They burned your sanctuary to the ground; they defiled the dwelling place of your Name” (Ps. 74:7).

Just as Solomon’s temple did not stand firm, the church of our Lord did not stand firm. The Scriptures prophesied that the church would enter apostasy. “The Spirit clearly says that in later times some will abandon the faith and follow deceiving spirits and things taught by demons. Such teachings come through hypocritical liars, whose consciences have been seared as with a hot iron” (1 Tim. 4:1-2). 2 Timothy 4:3-4.

Jeshua, Zerubbabel, and their associates built the altar on its foundation. Temples and altars were not erected haphazardly; even in pagan religions, the place the temple was constructed had some special significance. The Lord, not man, chose the place for the temple’s construction. “That day he [Joshua] made the Gibeonites woodcutters and water carriers for the community and for the altar of the LORD at the place the LORD would choose” (Josh. 9:27). The Lord showed his approval for the temple’s construction – “When the priests withdrew from the Holy Place, the cloud filled the temple of the LORD. And the priests could not perform their service because of the cloud, for the glory of the LORD filled his temple” (1 Ki. 8:10-11).

Instead of` building a completely new altar, Jeshua and Zerubbabel had the workers construct the altar on the foundation of the destroyed altar. These would have served a couple purposes:

This would provide continuity of worship.

This would allow the workers to know they were building in precisely the right spot.

God had specified exactly where that altar should be; building on the foundation of the fallen altar, the workers know exactly where God wants the altar.

What if the builders had decided to erect the new altar in a slightly different place? What if they had said, “God, this altar’s going to have a lot of smoke coming up from it, and if we move it just 18 inches to the right, that smoke’s going to cause a lot less problems than if we put it back here?” Do you honestly think God would have been pleased? You know that God didn’t care for priests changing the sacrifices: Leviticus 10:1-2.

These workers are going to be careful to build the altar just as God wanted.

As the church to her original state, shouldn’t she be restored upon the same foundation as the early church? Jesus serves as the foundation of the church. We recall quite well what he told Peter: “l tell you that you are Peter, and on this rock l will build my church” (Matt. 16:18). “No one can lay any foundation other than the one already laid, which is Jesus Christ” (1 Cor. 3:11).

How does Jesus serve as the foundation of the church?

The apostles and prophets also serve as the foundation of the church. Ephesians 2: 19-20. If I’m correct in saying that the city in Revelation 21-22 refers to the church glorified, notice this statement: “The wall of the city had twelve foundations, and on them were the names of the twelve apostles of the Lamb” (Rev. 21 :14).

Let us strive to follow the words of Scripture in order that this congregation may be built upon a firm foundation, the same foundation as the early church!

The people celebrated the Feast of Tabernacles, the regular burnt offerings, the New Moon sacrifices and the sacrifices for all the appointed sacred feasts of the LORD. On the first day of the seventh month, the people began to offer brunt offerings to the LORD.

These feasts had been ordained by God. The Feast of Tabernacles was to remind the Israelites that their ancestors had lived in tents when God brought them out of Egypt (Lev. 23:33-42). The New Moon sacrifices were established in Numbers 28:11-15 – because the Jewish calendar was a lunar calendar, the New Moon sacrifices are referred to as monthly sacrifices in Numbers. The people also kept the sacrifices for all the appointed sacred feasts as well as the free will offerings – this is a group of individuals who desperately wanted to do the right thing.

Notice how they were keeping these feasts – “Then Jeshua son of Jozadak and his fellow priests and Zerubbabel son of Shealtiel and his associates began to build the altar of the God of Israel to sacrifice burnt offerings on it, in accordance with what is written in the law of Moses.” The Israelites were going back to the Law of Moses and asking the question, “How does God want us to worship?” They understood that they could not worship however they chose, but that they had to worship in accordance with what was written in the Law of Moses.

Also, when the foundation of the temple was laid, the priests with trumpets and the Levites with cymbals praised God as prescribed by David. The blowing of trumpets was a duty prescribed for the priests. “The sons of Aaron, the priests, are to blow the trumpets. This is to be a lasting ordinance for you and the generations to come” (Num. 10:8). Additionally, trumpets were sounded at joyous occasions – they were used, for example, at the dedication of the wall of Jerusalem (Neh. 12:35). Cymbals also were typically played by priests and Levites.

This was the praise prescribed by David. David established the musical instruments to be used in temple worship. “The priests took their positions, as did the Levites with the LORD’s musical instruments, which King David had made for praising the LORD and which were used when he gave thanks” (2 Chr. 7:6). It is important to note that David made these changes in accordance with the will of God (2 Chr. 29:25-26).

Don’t the Israelites set a wonderful example for us? When they wanted to know how to reestablish acceptable worship, they went back to God’s inspired instructions. Can we do anything less when we desire to know how to reestablish acceptable worship? The Israelites examined God’s Law, and God had instructed both animal sacrifices and instruments for his praise. Although both animal sacrifices and instrumental music are no longer acceptable praise to God, the principle still applies; Go back to God’s word to see how he desires to be worshiped.

Far too few individuals today go back to God’s Word to see how he desires to be worshiped. In researching this sermon, I searched the Internet for some odd worship ideas. Alternativeworship.org recommends some of the following activities: sculpture, mime, juggling, firebreathing, guided fantasies, drawing, holding stones and other natural objects, molding clay. I have no idea how such activities are to lead individuals into closer worship with God.

You know, however, that such activities are not that common in Christendom. Generally, men have added a few things here and a few things there that they believe will aide them as they worship. Jesus had quite strong words for those who would change worship: “These people honor me with their lips, but their hearts are far from me. They worship me in vain; their teachings are but rules taught by men” (Matt. 15:8-9). Vain worship, according to Jesus, comes when individuals follow human ideas, rather than God’s ideas.