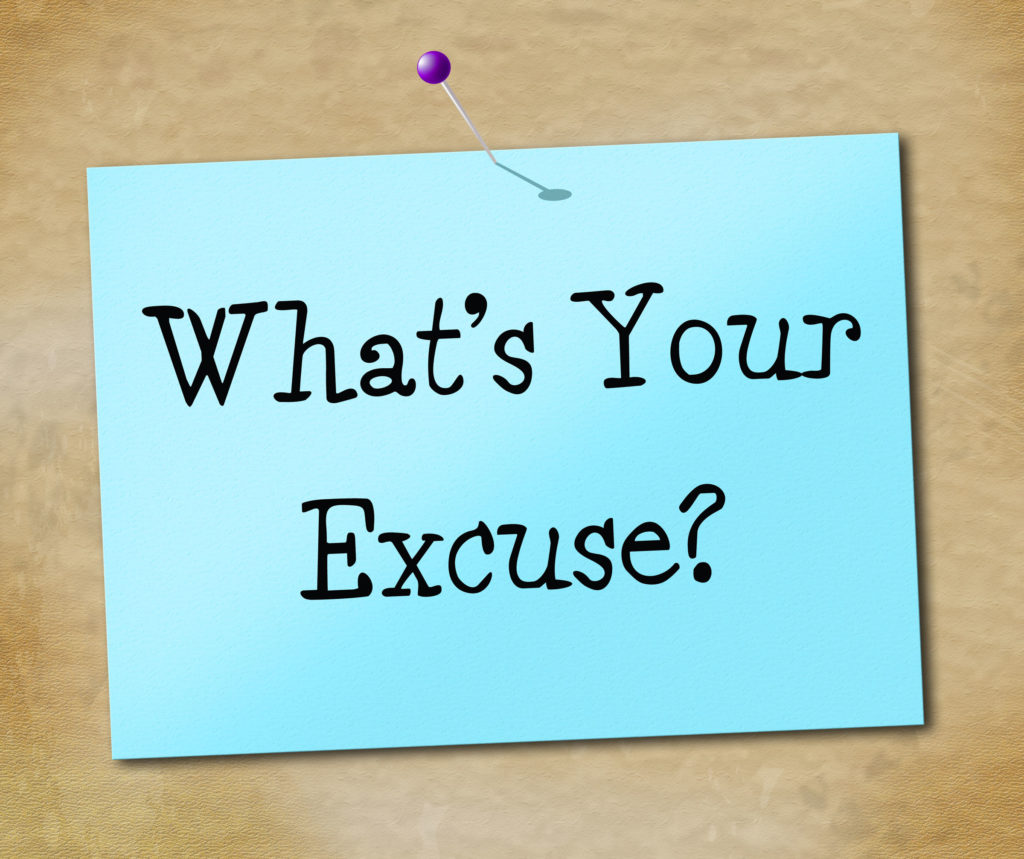 Someone has compiled the most outrageous excuses for traffic accidents:

We live in an age of excuses. When a man is caught in an affair, he often says, “My wife wasn’t satisfying me.” When children go on a shooting rampage in a school, it’s because other kids were bullying him. When we lie, we say, “I just didn’t want to hurt her feelings.” When we miss worship, “I was just too tired. I didn’t feel like coming.”

God does not take kindly to excuses. “If I had not come and spoken to them, they would have no sin, but now they have no excuse for their sin” (Jn 15:22). “They are without excuse” (Rom 1:20). “These times of ignorance God overlooked, but now commands all men everywhere to repent” (Acts 17:30).

Since God does not take kindly to our excuses, we need to be so very cautious about making excuses. Let’s examine some excuses so that we might be better equipped to resist making excuses for our behavior.

It’s Not My Fault

Some biblical characters tried this excuse. When God asked Adam why he ate of the forbidden fruit, Adam said, “The woman whom You gave to be with me, she gave me of the tree, and I ate” (Gen 3:12). When Moses asked Aaron why he had built the golden calf, Aaron replied, “You know the people, that they are set on evil” (Ex 32:22).

God did not accept these excuses. He cursed the land Adam would have to work his whole life (Gen 3:17-19). The account of Aaron’s building the golden calf makes Aaron look foolish—especially his statement that the calf came out of the fire when he put the people’s gold in the fire.

Aren’t we tempted to pass the buck today, too? “My friends tempted me, and I sinned.” “My husband just doesn’t want to come on Wednesday nights, so I don’t either.”

Are you blaming others for your sin?

When Saul brought back spoil from the Amalekites he was not permitted to take, he told Samuel, “The people took the plunder, sheep and oxen, the best of the things which should have been utterly destroyed, to sacrifice to the LORD your God in Gilgal” (1 Sam 15:21).

God strongly condemned Saul for his actions. Samuel told Saul, “Behold to obey is better than sacrifice, And to heed that the fat of rams” (1 Sam 15:22). Samuel concluded his rebuke of Saul with, “Because you have rejected the word of the LORD, he also has rejected you from being king” (1 Sam 15:23).

Many times today we say that we’re helping God. “I know instrumental music isn’t appropriate, but it makes me feel closer to God.” “I know that denominationalism is sinful, but they’re really trying to honor God, so I’ll worship with them every now and then.”

Are you saying that you’re helping God when you are really sinning against him?

Two biblical characters claimed that they could not do what God was asking them to do.

Moses claimed that he could not deliver the Israelites from Egypt. “Who am I that I should go to Pharaoh, and that I should bring the children of Israel out of Egypt?” (Ex 3:11). “Suppose they will not believe me or listen to my voice; suppose they say, ‘The LORD has not appeared to you’” (Ex 4:1). “O my Lord, I am not eloquent, neither before nor since You have spoken to Your servant; but I am slow of speech and slow of tongue” (Ex 4:10).

When the Lord told Jeremiah that he had ordained him a prophet to the nations, Jeremiah said, “I cannot speak, for I am a youth” (Jer 1:6).

God accepter no excuses from Moses or Jeremiah. God answered every objection Moses offered and he sent him to deliver the children of Israel out of Egypt. God told Jeremiah, “Do not say, ‘I am a youth,’ For you shall go to all to whom I send you, And whatever I command you, you shall speak” (Jer 1:7).

A Chinese proverb says, “The man wo says it cannot be done should not interrupt the man who is doing it.”

We all have different talents. In the Parable of the Talents, the master gave his servants talents “each according to his own ability” (Matt 25:15). “Having then gifts differing according to the grace that is given to us, let us use them” (Rom 12:6). “And He Himself gave some to be apostles, some prophets, some evangelists, and some pastors and teachers” (Eph 4:11).

Are we saying that we cannot do what God has expected us to do?

In the Parable of the Talents, the one who hid his talent said, “I was afraid, and went and hid your talent in the ground” (Matt 25:25). This servant was so afraid that he would lose his master’s money that he hid it in the ground. Because he was afraid and did nothing, he was cast into the outer darkness (Matt 25:30).

Those who are afraid often cannot do much. Ten spies came back from scouting Canaan, and they said that the people there were too large for the Israelites to take Canaan—they were afraid (Num 13:33). When the children of Israel saw Goliath, they “fled from him and were dreadfully afraid” (1 Sam 17:24). When Jesus was arrested, “all the disciples forsook Him and fled” (Matt 26:56). If we are fearful, we will be lost—the cowardly will have their part in the lake of fire (Rev 21:8).

We are often afraid. “If I respond to the invitation, everyone will look at me funny.” “If I don’t do what my friends want me to do, they’ll think I’m weird and I’ll lose their friendship.” “If I talk to my friends about Jesus, they’ll get mad and we won’t be friends anymore.” “If I stand up to my employer and tell him I’m not doing that, he’ll fire me.”

What about you? Are you not doing God’s will because you are afraid?

I Don’t Know How

Matthew 25:44-45. Jesus condemned these people for not caring for him when he was down and out. They said, “Lord, when did we see you that way?” Jesus said when they didn’t do it to one of his disciples, they did not do it to him. They basically say, “Lord, we just didn’t know that we were supposed to do that.” Jesus did not accept this excuse—he sent this crowd to hell.

Ignorance of the will of God is a very dangerous thing. The Pharisees came and asked Jesus if a man could divorce his wife for any cause. Jesus answered them, “Have you not read that He who made them at the beginning ‘made them male and female?’” (Matt 19:4). When the Sadducees came and asked Jesus about the resurrection, he responded, “You are mistaken, not knowing the Scriptures nor the power of God” (Matt 22:29).

Are you claiming ignorance before God? God no longer overlooks ignorance (Acts 17:30).

In the Parable of the Great Supper, those who were invited made excuses as to why they could not come. One said, “I have bought a piece of grounds, and I must go and see it.” Another said, “I have bought five yoke of oxen, and I am going to test them.” Still another said, “I have married a wife.” What they were basically saying is: “I do not have the time to come right now.” These excuses were not accepted, for the master said, “None of those men who were invited shall taste my supper” (Lk 14:24).

Are you too busy for God? If you are, why should you expect God to make time for you?

There are so many excuses one can use to keep from coming to Jesus. What excuses have you made?

Why not rid yourself of those excuses and come to Jesus while we stand and sing?