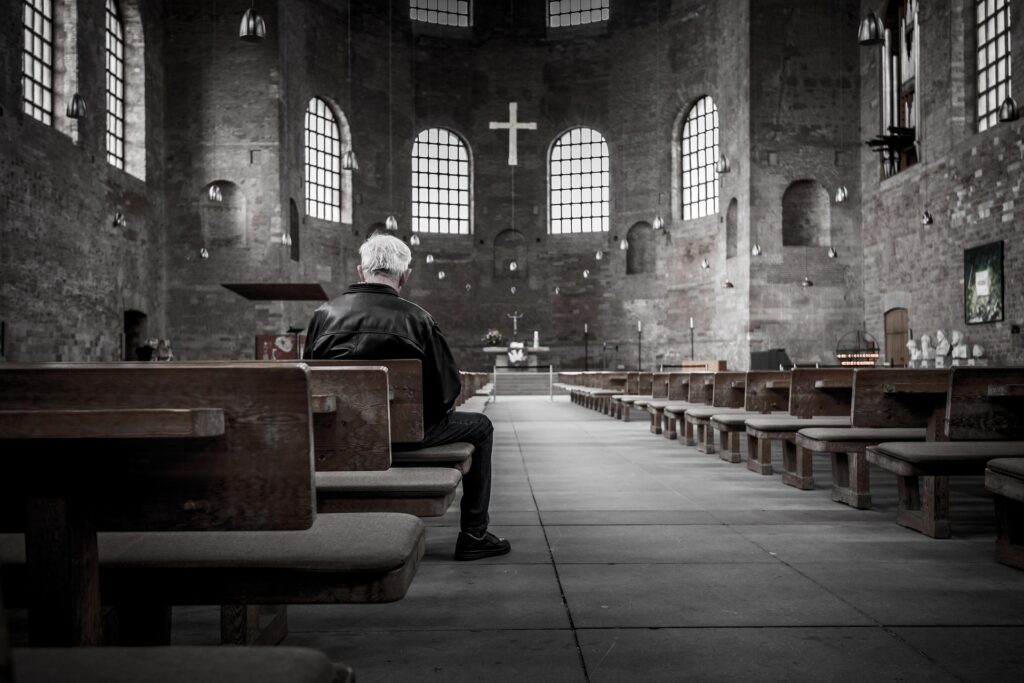 Church is Finally Over

Your favorite team is playing in the Super Bowl–the Redskins or the Packers or whoever. All the goodies are ready, the TV was left on so you could come right in from church and start the game, but Justin Imel won’t shut up! He keeps talking about some mundane point you’ve known since you were knee high to a duck. One thought keeps running through your mind: “When will church finally be over?”

You overslept and didn’t have time for breakfast. Your wife made a meatloaf the night before and stuck it in the oven before you walked out the door. Your stomach grumbles all through the service, so much so that you hope the people behind you don’t hear. Someone actually has the audacity to respond to the invitation that morning, more hymns are led, and then Brother So-and-So is called on for prayer. And everyone knows how long Brother So-and-So prays! One thought keeps running through your mind: “When will church finally be over?”

It might be that tonight, this service is interrupted, and church may finally be over. We might have sung our last song, prayed our last prayer, partaken of the Lord’s Supper for the last time, you may have given of your means for the last time, and this might be the last sermon ever preached at this church. 2 Peter 3:10-12.

Tonight, I want you to meet Fred. Fred is a good person. He works hard, takes excellent care of his family, but he’s not a Christian. Yet, tonight Fred has come to services; his wife dragged him here. Let us sit with Fred as he ponders the question, “When will church finally be over?”

The song leader begins the singing of “Jesus is Coming Soon!” “Jesus is coming soon, morning or night or noon, Many will meet their doom, trumpets will sound. All of the dead shall rise, righteous meet in the sky, Going where no one dies, Heavenward bound!” Fred sits there thinking, “Yeah right! I’ve heard that all my life, but He hasn’t come yet. He’s not coming anytime soon whatsoever.” 2 Peter 3:3-4, 10. Fred doesn’t realize that perhaps the Lord hasn’t returned in order to give Fred time to repent (2 Pet 3:9). Do we understand that the Lord is delaying His return to give us an opportunity to be right before Him?

It is true, as Fred realizes, that the world continues as it has since we came into this world. Yet, it is also true that this world can change instantaneously: Matthew 24:36-39, 42-44. “You yourselves know perfectly that the day of the Lord so comes as a thief in the night. For when they say, ‘Peace and safety!’ then sudden destruction comes upon them, as labor pains upon a pregnant woman. And they shall not escape” (1 Thess 5:2-3). James 4:13-14.

This life is so very fragile. On a beautiful September morning in 2001, many went to work or boarded planes, not knowing that they would soon be consumed by a fiery inferno. I can’t tell you how many funerals I’ve done for folks who were in church on Sunday morning and looked just fine but were at the funeral home by Monday morning.

Fred doesn’t know it as he begins to sing, but church is soon going to be over.

After the song, one of the brothers gets up to pray, and he prays, “Lord, we pray for those who aren’t Christians. We pray that their hearts might be opened to Your truth.” Fred heard those words every time he came with his wife, and he knew there were many in the world who weren’t Christians. Yet, it never really dawned on Fred that folks were praying for him. It never dawned on Fred that so many loved him so deeply and they desired to see him come to Christ.

Prayers for the lost are so very important. “He said to His disciples, ‘The harvest truly is plentiful, but the laborers are few. Therefore pray the Lord of the harvest to send out laborers into His harvest'” (Matt 9:37-38). “Brethren, my heart’s desire and prayer to God for Israel is that they may be saved” (Rom 10:1). The people for whom Paul was praying were good people. These were Jews, the chosen of God. Paul goes so far in verse 2 as to say: “They have a zeal for God.” These were people who really wanted to do the right thing. While they wanted to do the right thing, they were lost!

Fred had no way of knowing as he listened to that prayer, but church would finally be over!

As men stood to distribute the Lord’s Supper, Fred couldn’t help but think, “What’s the big deal?” It was one of those things Fred could do or he could do without. He’d take it sometimes–simply because everyone else in the pew did. Sometimes, he didn’t. It just wasn’t a big deal. Fred knew that other churches didn’t take the Lord’s Supper as often. Why the big fuss over eating unleavened bread and drinking fruit of the vine every week?

Before the body and blood of the Lord were distributed, one of the brothers read from Matthew 26:26-29. Fred had heard these words a million times before. He didn’t pay any attention to them. Fred’s heart and mind did not go back to Calvary to stand at the foot of the cross as Jesus was crucified. Fred’s mind was on other matters–who’d win the ballgame this afternoon, how long the preacher would preach, where he was taking his family for lunch.

Fred just didn’t understand. But, church was soon finally going to be over!

After the Lord’s Supper, the man presiding at the table said something about the contribution and handed trays to the men assisting. They started passing out the trays and people started putting in their weekly contribution. Week after week, it was the same old thing. It seemed that this church was greatly concerned about money.

But Fred just didn’t give. With gas prices the way they are now, he just didn’t have a whole lot left over after he took the kids to all their activities. He had many bills to pay. Do you realize what the interest rates on those credit cards are? Fred was going to send his son to a private college next year. Have you seen tuition prices lately?

Fred just didn’t realize how important giving really is. Fred didn’t realize the importance of the Corinthians’ example: “Now concerning the collection for the saints, as I have given orders to the churches of Galatia, so you must do also: On the first day of the week let each one of you lay something aside, storing up as he may prosper, that there be no collections when I come” (1 Cor 16:1-2). Fred didn’t pay attention to the words “each of you.” For Fred, those words referred to those who were well-to-do or who had very good paying jobs. They certainly didn’t apply to him.

Fred also had forgotten the words of Jesus–Matthew 6:19-21. Fred knew that Jesus meant those words, but Fred didn’t have many treasures here on earth. He was barely making ends meet–what he had wasn’t enough to lay up.

Fred didn’t know, but church would soon be over.

The preacher got up, and it became quite clear that this was going to be a long sermon. The preacher went to Psalm 119 and talked about 176 verses. Each verse seemed to have something the preacher just had to bring up! But poor Fred was having a hard time! It was an absolutely beautiful day outside, and Fred doesn’t get much time off work. It’s getting on toward lunch time, and the preacher just will not shut up. Fred didn’t get much sleep last night, and he sure wants to go home and take a nap. If only the preacher would quit.

Fred just failed to understand the importance of preaching. Jesus came in order to be a preacher: “Let us go into the next towns, that I may preach there also, because for this purpose I have come forth” (Mk 1:38). God saves through preaching: “It pleased God through the foolishness of the message preached to save those who believe” (1 Cor 1:21). Paul gave Timothy a solemn charge to preach: “I charge you therefore before God and the Lord Jesus Christ, who will judge the living and the dead at His appearing and His kingdom: Preach the word!” (2 Tim 4:1-2).

As important as preaching is, preaching will not save everyone: Acts 28:23-24. All the people heard the same message, but they responded differently. Fred heard the message, but he just wasn’t ready to accept it. Fred had no idea, however, that this would be the last sermon he would ever hear because church was finally going to be over.

The preacher finally got done, and the song leader got up and began to lead, “There’s a Great Day Coming.” Fred knew it was true. There was a great day that was coming, but not today, not tomorrow. Someday, yeah, but not anytime soon.

“Knowing, therefore, the terror of the Lord, we persuade men” (2 Cor 5:11). Paul, knowing how fearful the Lord is, sought to persuade others. Fred was almost persuaded, but not quite. If only Fred knew that this would be the last invitation hymn he would ever hear, because church was finally going to be over.

Fred was still singing when he heard it–the shout that sent cold chills down his spine. With the shout, time stopped. When the trumpet was heard, there was no longer a roof over the building, but there was Jesus coming in the clouds, and the graves were opened and the dead were coming out. Church was indeed finally over, and only if Fred could sing again, pray again, partake of the Lord’s Supper, give of his means, hear a sermon, or respond to the invitation!

Do you need to come tonight and prepare for that great day that is coming?

The main ideas of this sermon came from my father, Randy Imel, the preacher for the Menifee Church of Christ in Frenchburg, KY.