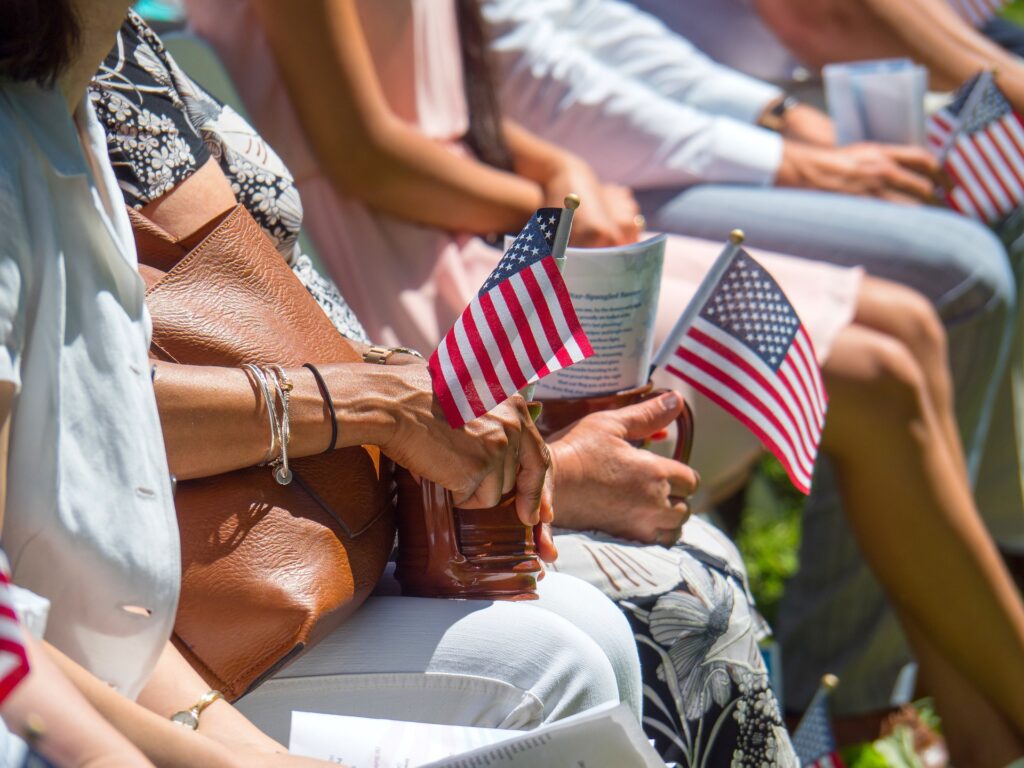 Yesterday was Independence Day, and many Americans no doubt participated in events that opened with the Pledge of Allegiance.

The Pledge of Allegiance is not nearly as old as the United States itself. The Pledge was written especially for children in the summer of 1892 to commemorate that year’s celebration of Columbus Day in the public schools throughout the country. It first appeared in print on September 8, 1892, in The Youth’s Companion, an education publication. As it first appeared in 1892, the pledge read: “I pledge allegiance to my Flag and the Republic for which it stands-one nation indivisible-with liberty and justice for all.” The author of the Pledge of Allegiance was Francis Bellamy. She wrote it for a one-time recitation on that Columbus Day of 1892. However, it was quite popular. It became a Columbus Day tradition and then it began being recited in classrooms throughout the country.

The Pledge has undergone two revisions. In 1923, the National Flag Conference of the American Legion replaced the somewhat ambiguous “my Flag” to “the Flag of the United States of America.” In 1954, amidst fears of Soviet Communism, Dwight Eisenhower signed a bill that added the words “Under God.”

Each of us here has repeated that Pledge countless times. We know the words so well that we likely never even stop to consider the meaning of those words. There are some other pledges, however, that dare not be taken without seriously considering the meaning behind the words. This morning, we want to explore the teachings of the Law of Moses regarding pledges and then see how that teaching can be applied to the New Testament.

A few weeks ago, we took a long look at Jesus’ teaching in the Sermon on the Mount concerning oaths. At that point, we went back and looked somewhat at the Old Testament teaching. This morning, I have absolutely no intention of rehashing that material. Instead, we want to explore just how serious those vows were.

This morning’s text comes from Deuteronomy 23:21-23. The purpose of this law is two-fold:

By the time of Peter, the word “answer” meant something far more than simply answering a question. In fact, this is the only occurrence of the term in the Greek New Testament; e.g., when Jesus is on trial, his answers are recorded with a totally different Greek term. In Peter’s day, contracts were often entered into verbally. There was a back-and-forth exchange regarding the terms of the contract. When individuals answered that exchange, this is the term that was used. The word implies the agreement where one promised to fulfill certain obligations. The imagery of this verse, then, is one where the convert formally pledges to serve God; he makes such a pledge from a good conscience.

There is a negative pledge we make at baptism: We pledge to put away the sin in our lives. “All of us who have been baptized into Christ Jesus were baptized into his death” (Rom 6:3). “In him also you were circumcised with a circumcision made without hands, by putting off the body of the flesh, by the circumcision of Christ, having been buried with him in baptism, in which you were also raised with him through faith in the powerful working of God, who raised him from the dead” (Col 2:11-12).

Shortly after the time of the apostles, those who were baptized often made a verbal pledge to leave their sin. Hippolytus, writing about AD 215, says that an elder would preside over a baptism. He would then have the candidates for baptism declare, “I renounce you Satan, all your service, and all your works.” Tertullian, who lived from AD 160 to 220, recounts baptism this way: “When we are going to enter the water, but a little before, in the presence of the congregation and under the hand of the president, we solemnly profess that we disown the devil, and his pomp, and his angels.” Whether we verbalize it or not, we make a solemn pledge at baptism to “disown the devil, and his pomp, and his angels.”

We must make such a pledge, for when we come to Christ, we are so full of sin. Ephesians 2:1-4. Yet, the blood of Jesus removed that sin from us; Jesus “freed us from our sins by his blood” (Rev 1:5).

Having been freed “from our sins by his blood,” we dare not live in sin. Granted, as mortal men, we cannot live without sin. If we claim to be without sin, “we deceive ourselves, and the truth is not in us” (1 Jn 1:8). God’s grace is just as great toward those who have come to Christ as those who haven’t-Simon the sorcerer had an opportunity to experience that grace anew (Acts 8:18-24).

However, we dare not use our frailties and God’s grace as an excuse for sin. “Are we to sin because we are not under law but under grace? By no means!” (Rom 6:15). If we persist in sin after our baptism, there is nothing left, save the expectation of a fearful judgment: “If we go on sinning deliberately after receiving the knowledge of the truth, there no longer remains a sacrifice for sins, but a fearful expectation of judgment, and a fury of fire that will consume the adversaries” (Heb 10:26-27).

The American Red Cross was gathering supplies, medicine, clothing, food, and the like for people suffering in Africa. Inside one of the boxes that showed up at the collection depot one day was a letter. The letter read: “We have recently been converted and because of our conversion we want to try to help. We won’t ever need these again. Can you use them for something?” Inside the box were several Ku Klux Klan sheets. The sheets were cut down to strips and eventually used to bandage the wounds of black persons in Africa. That is putting away sin! That is putting on the new man! That is being raised to walk in newness of life!

Have you made the pledge of putting away the sin in your life? Are you living up to that pledge?

There is also a positive pledge we make when we are baptized: We pledge to follow Jesus. Jesus told his Apostles to baptize disciples: “Go . . . and make disciples of all nations, baptizing them in the name of the Father and of the Son and of the Holy Spirit” (Matt 28:19). The idea of a “disciple” is one who learns from one he is following. When Jesus called his disciples, we read, that he saw Simon and Andrew casting their nets into the sea, “and he said to them, ‘Follow me, and I will make you fishers of men.’ Immediately they left their nets and followed him” (Matt 4:19-20). The term for “follow” does not mean that Simon and Andrew followed Jesus as he walked along the seashore. Rather, the term means to “become a disciple.” Thus, as disciples, Simon and Andrew followed Jesus in order to learn from him. It was from both Jesus’ teaching and his example that the disciples learned how to carry out their own ministries.

Jesus often encouraged his hearers to learn from him. “Take my yoke upon you, and learn from me, for I am gentle and lowly in heart” (Matt 11:29). After Jesus washed the feet of his disciples, he says to them, “I have given you an example, that you also should do just as I have done to you” (Jn 13:15). Therefore, as baptized disciples, we can go to Jesus’ teaching and example to know how he desires we live in this world.

In being baptized, we are raised from the waters to live like Jesus. “We were buried therefore with him by baptism into death, in order that, just as Christ was raised from the dead by the glory of the Father, we too might walk in newness of life” (Rom 6:4). “As many of you as were baptized into Christ have put on Christ” (Gal 3:27).

When we were baptized into Jesus, we “put on Christ,” but do we continue to wear his garment? If those with whom we work were asked if we wore Christ, what would they honestly say? What type of character do they see in us? If our family were asked what type of garment we wore-the garment of Christ or the garment of sin-how would they answer? How do we live when we’re away from the public eye? If Jesus Christ-who sees all-were asked this very morning if you wore his garment, how would he answer?

Our pledge to the Lord in baptism is a solemn and serious pledge. The Lord has no desire for us to make this pledge and turn back to a life of sin. “No one who puts his hand to the plow and looks back is fit for the kingdom of God” (Lk 9:62). “My righteous one shall live by faith, and if he shrinks back, my soul has no pleasure in him” (Heb 10:38).

Pledging to follow the Lord and turning back to a life of sin is serious, serious business. Hebrews 10:26-31. “If, after they have escaped the defilement of the world through the knowledge of our Lord and Savior Jesus Christ, they are again entangled in them and overcome, the last state has become worse for them than the first. For it would have been better for them never to have known the way of righteousness than after knowing it to turn back from the holy commandment delivered to them” (2 Pet 2:20-21). It’s better, says the inspired apostle, never to become a Christian than to become one and turn away from the Lord. I’m convinced that’s because a more fearful judgment awaits the fallen Christian: “That servant who knew his master’s will but did not get ready or act according to his will, will receive a severe beating. But the one who did not know, and did what deserved a beating, will receive a light beating” (Lk 12:47-48).

While making this pledge is serious, there is a God in heaven who will strengthen us as we walk with him. “Because [Jesus] himself has suffered when tempted, he is able to help those who are being tempted” (Heb 2:18). “We do not have a high priest who is unable to sympathize with our weaknesses, but one who in every respect has been tempted as we are, yet without sin. Let us then with confidence draw near to the throne of grace, that we may receive mercy and find grace to help in time of need” (Heb 4:15-16). We do not walk the Christian life alone! But, Jesus walks with us, and, if we turn to him, will help us in our “time of need.”

Maybe it’s the case this morning that you once made this pledge through baptism, but you have turned “back from the holy commandment.” Granted, that is a serious situation, but God, who is full of mercy, offers hope in such a predicament. After Simon the sorcerer fell back into sin, Peter said to him, “Repent, therefore, of this wickedness of yours, and pray to the Lord that, if possible, the intent of your heart may be forgiven you” (Acts 8:22). Do you need to repent of your wickedness and pray to the Lord this very morning? Do you need to make a pledge to follow Jesus and give up sin by submitting to baptism this very morning?