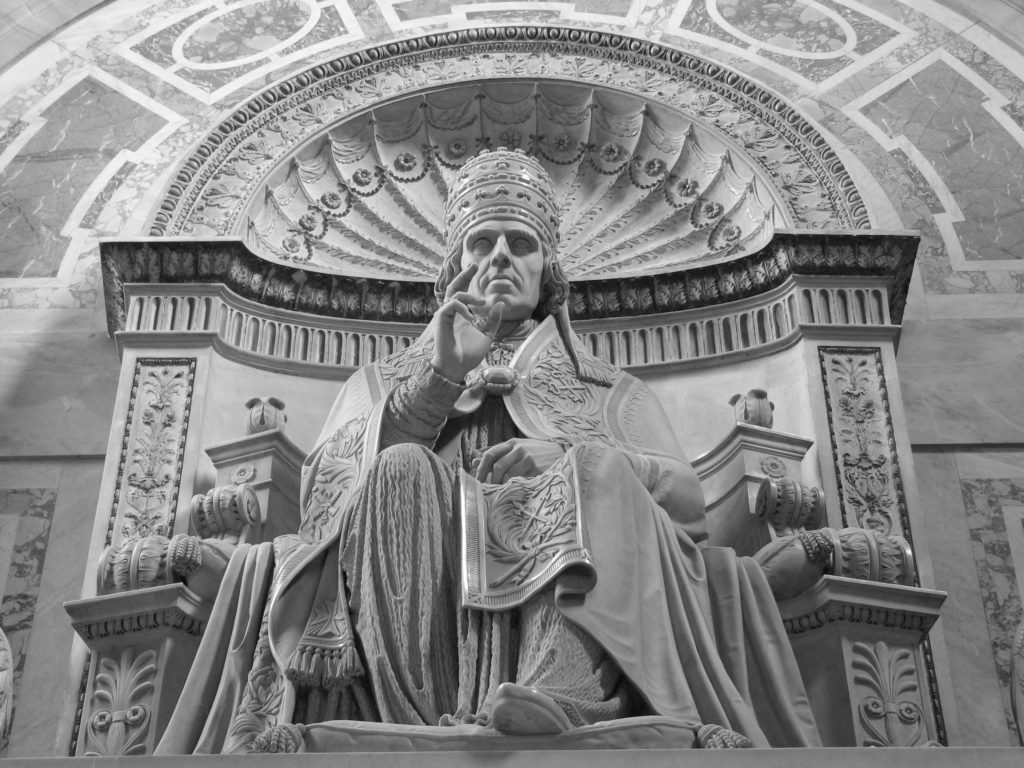 Why Not Have a Pope?

When I was five or six, Pope John Paul II made a well-publicized trip to the United States. It seemed that for a few days that every time you turned on the television, there were images of John Paul II traversing the nation. I made up my mind that I was going to be the first Pope in the Church of Christ.

A few days after I made that my goal in life, Mom and Dad took us three boys to a large July 4th firework display in Lexington. There, amid all the patriotic paraphernalia, was a silver cross on a chain. That’s what I had to have—John Paul wore a cross around his neck, and I was determined I was going to do so, too.

Before we get too far into tonight’s lesson, let’s give some background about the Papacy. The word “Pope” means “father” and comes from the Latin “Papa.” There were numerous “horrible” popes:

I know there have been many preachers who were “horrible” people; however, they did not claim to be representatives of Christ in the same way as the Pope.

Let’s explorer what the Catechism of the Catholic Church teaches concerning the papacy and let’s compare that to Scripture.

From the Catechism of the Catholic Church:

Some problems with that interpretation:

Peter is not presented as the rock upon which Jesus built his church.

It is well-known that “petros,” the Greek form of “Peter,” means “rock.” But “petros” means something like “little pebble.” However, when Jesus speaks of building his church “on this rock,” he uses the term “petra;” “petra” means “big boulder.” Even in English, it’s obvious that Peter isn’t referring to Peter as the rock, for he says, “You are Peter, and I’m going to build my church on this rock.” Were Jesus referring to Peter, it would seem that he would say, “I’m gong to build my church on you, the rock.”

If Peter were in fact the rock upon which the church were built, the text doesn’t say that he has any successors.

Concerning the keys of the kingdom of heaven:

A key is used to open and shut doors—that’s how keys are understood in Scripture: “I will place on his shoulder the key to the house of David; what he opens no one can shut, and what he shuts no one can open” (Is 22:22). The keys are likely connected here with the binding and loosing on earth and in heaven, which could very possibly have reference to the forgiveness of sins. If that’s the case, Jesus likely means that Peter will be the one who will announce the requirements for forgiveness of sins. We see Peter’s doing that both on the Day of Pentecost and when he went to Cornelius’ household.

“The Lord made Simon alone, whom he named Peter, the ‘rock’ of his Church. He gave him the keys of his Church and instituted him shepherd of the whole flock. The office of binding and loosing which was given to Peter was also assigned to the college of apostles united to its head. This pastoral office of Peter and the other apostles belongs to the Church’s very foundation and is continued by the bishops under the primacy of the Pope” (paragraph #881, p. 233).

The Lord told Peter to shepherd his sheep, and he did. Peter wrote two books of the instruction of the people of God, and Peter continues (in a sense) to pastor the church through those two books. Peter served as a pastor in the early church: “To the elders among you, I appeal as a fellow elder, a witness of Christ’s sufferings and one who also will share in the glory to be revealed: Be shepherds of God’s flock that is under your care” (1 Pet 5:1-2).

Again, there is no indication in this passage that Peter’s pastoral role would extend beyond his death or that he would have successors.

Quotes from the Catechism of the Catholic Church:

There is no biblical warrant for saying that Peter or any other apostle was to have successors. If the apostles were to have successors, I am absolutely persuaded God would have outlined the requirements of such successors within Scripture.

The first reference we have to apostolic succession comes from Irenaeus who wrote in the late second to early third century. Irenaeus attempted to demonstrate that the true faith could be detected from heretical faith in that true faith come from the apostles to bishops. He wrote: “It is within the power of all, therefore, in every Church, who may wish to see the truth, to contemplate clearly the tradition of the apostles manifested throughout the whole world; and we are in a position to reckon up those who were by the apostles instituted bishops in the Churches, and [to demonstrate] the succession of these men to our own times; those who neither taught nor know of anything like what these [heretics] rave about” (Against Heresies, 3.3.1). Although this doctrine is obvious ancient—coming from at least the second century—it doesn’t go all the way back to the apostolic era.

The Pope Serves as a Symbol of Unity in Catholic Theology

“The unity of the pilgrim Church is also assured by visible bonds of communion; profession of one faith received from the Apostles; common celebration of divine worship, especially of the sacraments; apostolic succession through the sacrament of Holy Orders, maintain the fraternal concord of God’s family” (Catechism of the Catholic Church, paragraph #815, p. 215).

Unity among God’s people is extremely important. The Lord hates “a man who stirs up dissension among brothers” (Prov 6:19). “I appeal to you, brothers, in the name of our Lord Jesus Christ, that all of you agree with one another so that there may be no divisions among you and that you may be perfectly united in mind and thought” (1 Cor 1:10).

The basis of unity, however, is none other than the Lord Jesus himself. “In Christ we have are many form one body, and each member belongs to all the others” (Rom 12:5). “Because there is one load, we, who are many, are one body, for we all partake of the one loaf” (1 Cor 10:17). “There is neither Jew nor Greek, slave nor free, male nor female, for you are all one in Christ Jesus” (Gal 3:28).

We don’t need some man in Rome or a bunch of bishops to unify the people of God; Jesus has done that himself.

The Church at Rome is Pre-Eminent in Catholic Theology

“Particular Churches are fully catholic through their communion with one of them, the Church of Rome which presides in charity. For with this church, by reason of its pre-eminence, the whole Church, that is the faithful everywhere, must necessarily be in accord. Indeed, from the incarnate Word’s descent to us, all Christian churches everywhere have held and hold the great Church that is here [at Rome] to be their only basis and foundation since, according to the Savior’s promise, the gates of hell have never prevailed against her” (Catechism of the Catholic Church, paragraph #834, p. 221).

there is no possible way to construe Jesus’ statement in Matthew 16 that the gates of hell would not prevail against his church as having anything to do with the church in Rome.

There is no biblical basis for claiming that one church is pre-eminent over another; all stand equal before God.

When the apostles appointed leaders in local congregations, they entrusted them to God. “Paul and Barnabas appointed elders for them in each church and, with prayer and fasting, committed them to the Lord, in whom they had put their trust” (Acts 14:23). To the Ephesian elders, Paul said, “Now I commit you to God and to the word of his grace, which can build you up and give you an inheritance among all those who are sanctified” (Acts 20:32). Notice what Paul did NOT do: He didn’t tell these elders, “I’m commending you to Peter in Rome, and you stay in communication with him and do what he says.” No, he commended them to God.

Notice these quotes from the Catechism of the Catholic Church:

There are four serious problems with this view:

Catholic theology has long held that the ideal state is for individuals to live without sex, and that sex, even in marriage, is giving in to baser instincts that we ought really to live above.That is not at all the biblical view. God made mankind a sexual being: “Male and female he created them” (Gen 1:27)—If sexuality were truly a “baser instinct,” why would God have made us male and female? Husbands and wives have been commanded not to deprive one another sexually (1 Cor 7:2-5).

The apostles had the right to marry.

“Don’t we have the right to take a believing wife along with us, as do the other apostles and the Lord’s bothers and Cephas?” (1 Cor 9:5). If the Pope were truly a successor of Peter, why does he not have the right to marry when Peter did have that right?

Bishops must be married.

“The overseer [bishop] must be above reproach, the husband of one wife” (1 Tim 3:2). How can the bishops of the Catholic Church—of which the Pope is one—be unmarried when Scripture says bishops must be married and have believing children?

The predicted apostasy included not allowing individuals to marry.

1 Timothy 4:1-3. According to Scripture, not allowing people to marry comes from demons, not God.

The largest problem I have with the Papacy is its blasphemous nature. The title “Holy Father” is nothing short of blasphemy. You know that “father” is a title which belongs exclusively to God: “Do not call anyone on earth ‘father,’ for you have one Father, and he is in heaven” (Matt 23:9). Isaiah saw seraphim who called out: “Holy, holy, holy is the LORD Almighty; the whole earth is full of his glory (Is 6:3). Calling any man “Holy Father” is far, far beyond the pale. Honestly, when John Paul II, I was tempted to put something in the bulletin along the lines of: “The Pope is dead, but the Holy Father lives forever.”

Because God is holy, we, as his children, have been called to holiness ourselves. “Just as he who called you is holy, so be holy in all you do; for it is written: ‘Be holy, because I am holy’” (1 Pet 1:15-16). How holy do you live? do you need to come tonight and commit yourself to holiness?