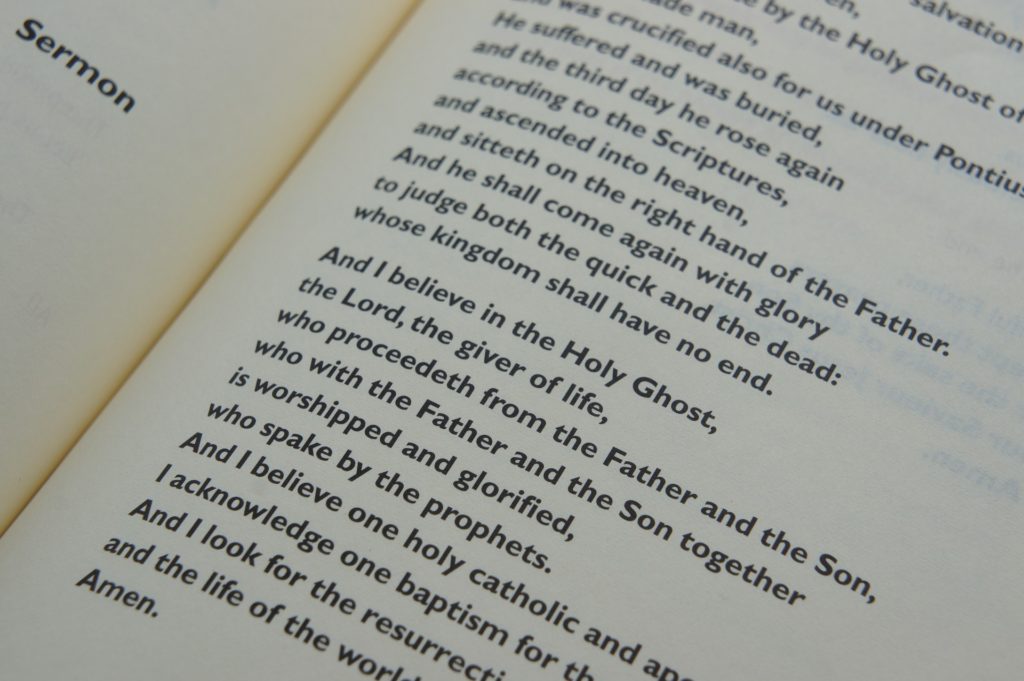 An artist was once doing some paintings for a Chinese king. The king asked him, “Tell me, please, what is the most difficult object of all to paint?” “Dogs, horses, and the like are the most difficult to paint,” the artist answered. “Then what is the easiest to paint?” The artist answered without hesitation, “The easiest are definitely monsters and ghosts.” “Why is that so?” the King asked. “Because dogs and horses are things we see every day,” the artist replied. “Thus we are familiar with them. If one draws them in the least bit unlike real dogs or horses, people can easily point out the faults. As for monsters and ghosts, we have never seen them. So they have no definite shape in our minds. Therefore, they are the easiest to paint, for who can say whether the resemblance is close or not?”

Because one could easily use an objective standard—a real dog or a real horse—by which to measure the artist’s work, those were the most difficult objects to paint. While objective standards made the artist’s work more difficult, objective standards usually make things easier. When I’m preparing a recipe and the recipe calls for a cup of onions or a tablespoon of olive oil, I know exactly how much to add to the recipe. When I stop for gas, I know the pumps have been examined, and I’m receiving a gallon of gas when I pay for a gallon. You ladies know that when you buy 3 yards of material, you’re going to get the same amount if you go to Walmart or Jo-Anns.

You know how important objective standards are for Christianity. Because there was no objective standard by which different Christians lived, there was a huge problem over circumcision in the early church. Some said that Gentiles who became Christians needed to be circumcised and keep the Law of Moses; others said that Gentiles who became Christians were under no obligation to keep the Old Law. The Judaizers—those who claimed Gentiles needed circumcision—ignored God’s standard, and thus they brought great division, dissension, and turmoil to the early church. In Acts 15, we have a record of the apostles and elders of the Jerusalem church coming together and the Holy Spirit’s guiding them to say that God’s objective standard was that the Gentiles did not need circumcision.

There are a variety of different standards—creeds—followed in the modern church. Two of the most popular creeds are ancient and come from the earliest part of Christian history.

I chose to give those two creeds for two main reasons. One: They are, without doubt, the most ancient and most historical of all man-made creeds. Second: Both creeds are true—they are both good, concise statements of Christian faith. I agree with those two creeds in their entirety.

The question tonight, then, is not: “How does a creed conform to Scripture?” for both the Apostles’ Creed and the Nicene Creed conform to Scripture. Instead, the question is: “Are creeds appropriate regardless of their content?” In other words, “Even if a creed contains nothing but Christian truth, is it appropriate to have a creed?” Tonight, I want us to explore that question.

We Don’t Need Creeds Because the Bible is All-Sufficient

The Scriptures often stress their all-sufficiency. “All Scripture is God-breathed and is useful for teaching, rebuking, correcting and training in righteousness, so that the man of God may be thoroughly equipped for every good work” (2 Tim 3:16-17). “His divine power has given us everything we need for life and godliness through our knowledge of him who called us by his own glory and goodness” (2 Pet 1:3).

Since God has given us everything we need to be thoroughly equipped for every good work and that we need for life and godliness, why should I seek anything else? Why should I seek something better than the Word of God since that word is all-sufficient?

Several years ago, I was studying with a family in my hometown. We covered the principle of biblical authority (I thought we had done so quite well), and we moved on to talk about the cross and our response to it. When we mentioned baptism, the guy said, “I don’t really think I need to be baptized. The thief on the cross wasn’t baptized. I’m going to call my pastor and see what he says.” The pastor got on the phone, and the young man asked him all these questions that had been raised in his mind, and the pastor answered all those questions with his denomination’s teaching. The young man hung up the phone and said, “Pastor Wyatt says I don’t need to be baptized, so I don’t.” That young man gave authority to the wrong authority—he gave it to a man, not the Word of God.

We should never give authority to men when our souls are at stake. You remember, no doubt, the praise Luke heaped on the Bereans: “The Bereans were of more noble character than the Thessalonians, for they received the message with great eagerness and examined the Scriptures every day to see if what Paul said was true” (Acts 17:11). What would have occurred if Paul intentionally desired to lead the Bereans astray and they hadn’t examined the Scriptures daily? What would have occurred if Paul had simply been misguided—he was honest and sincerely wanted to do the right thing, but he just didn’t know any better and he led the Bereans astray?

There are many who intentionally want to lead folks astray. Paul told the Ephesian elders: “Even from your own number men will arise and distort the truth in order to draw away disciples after them” (Acts 20:30). Some from the eldership would arise to lead disciples away after them—notice that this was not innocent—they wanted the disciples to follow them, not the Lord. There are many who are sincere but misguided, but I’m convinced there are also many who know they’re misguided and are intentionally leading people astray that they might benefit. We need to be aware of such folks!

There are many who are sincere and unintentionally lead folks astray. That was the case with Apollos: Acts 18:24-26. There’s no hint that Apollos intentionally led anyone astray, but he was misguided. Because Priscilla and Aquilla knew enough Scripture and cared enough about Apollos, they took him aside and explained the Word of God more accurately to him. May we be on our guard against those who unintentionally teach error and may we be gentle enough to take them and teach them truth!

The Bible, unlike creeds, not only lives, but it also gives eternal life. “The Spirit gives life; the flesh counts for nothing. The words I have spoken to you are spirit and they are life” (Jn 6:63). “You have been born again, not of perishable seed, but of imperishable, through the living and enduring word of God” (1 Pet 1:23). “He chose to give us birth through the word of truth, that we might be a kind of firstfruits of all he created” (Jn 1:18).

We Don’t Need Creeds Because They Originate with Man

There are a multitude of written creeds available—from the Catechism of the Catholic Church to the Articles of Religion of the Methodist Church to the Baptist Faith and Message of the Southern Baptist Convention. These three creedal statements—and there are a host of others—each conflict with each other in many particulars. However, they are similar in that they all originate with man.

Scripture, although written by men, did not have human origin. “All Scripture is God-breathed and is useful for teaching, rebuking, correcting and training in righteousness, so that the man of God may be thoroughly equipped for every good work” (2 Tim 3:16-17). “Prophecy never had its origin in the will of man, but men spoke from God as they were carried along by the Holy Spirit” (2 Pet 1:21).

the creeds of various churches came, not from God, but from God—totally unlike the Word of God.

We Don’t Need Creeds Because They Divide

I just mentioned how different the various creeds of Christendom are. From a marketing standpoint, that’s great, because each person can find the church which best meets his likes and dislikes. Yet, from a biblical standpoint, this is a great disgrace, because these creeds serve to divide people into man-made denominations.

God never intended for the church to be divided, but to be united. “My prayer is not for them alone, I pray also for those who will believe in me through their message, that all of them may be one, Father, just as you are in me and I am in you. May they also be in us so that the world may believe that you have sent me” (Jn 17:20-21). “I appeal to you, brothers, in the name of our Lord Jesus Christ, that all of you agree with one another so that there may be no divisions among you and that you may be perfectly united in mind and thought” (1 Cor 1:10). Creeds directly violate this passage, for they are in no way helpful in saying the same thing.

We Don’t Need Creeds Because They Change

Creeds constantly need to be updated, and they are constantly changing. The Southern Baptist Convention, for example, adopted a revised summary of faith on June 14, 2000. The Catholic Church has changed creedal statements from Vatican I to Vatican II to the most current Catechism of the Catholic Church.

The Word of God, in contrast to creeds, does not change. “Your word, O LORD, is eternal; it stands firm in the heavens” (Ps 119:89). “The grass withers and the flowers fall, but the word of our God stands forever” (Is 40:8). “I tell you the truth, until heaven and earth disappear, not the smallest letter, not the least stroke of a pen, will by any means disappear from the Law until everything is accomplished” (Matt 5:18).

Can you imagine having to keep up with a changing creed so that you could know what you believed, why you believed it, and what you should obey? Granted, a single denomination’s creed doesn’t change all that often. But it would be very discouraging to me if I had years of sermons filed away and then the headquarters decided to change things so I had to learn totally new things and write totally new sermons.

Do you need to come tonight and obey that Word that never changes, the Word of God?