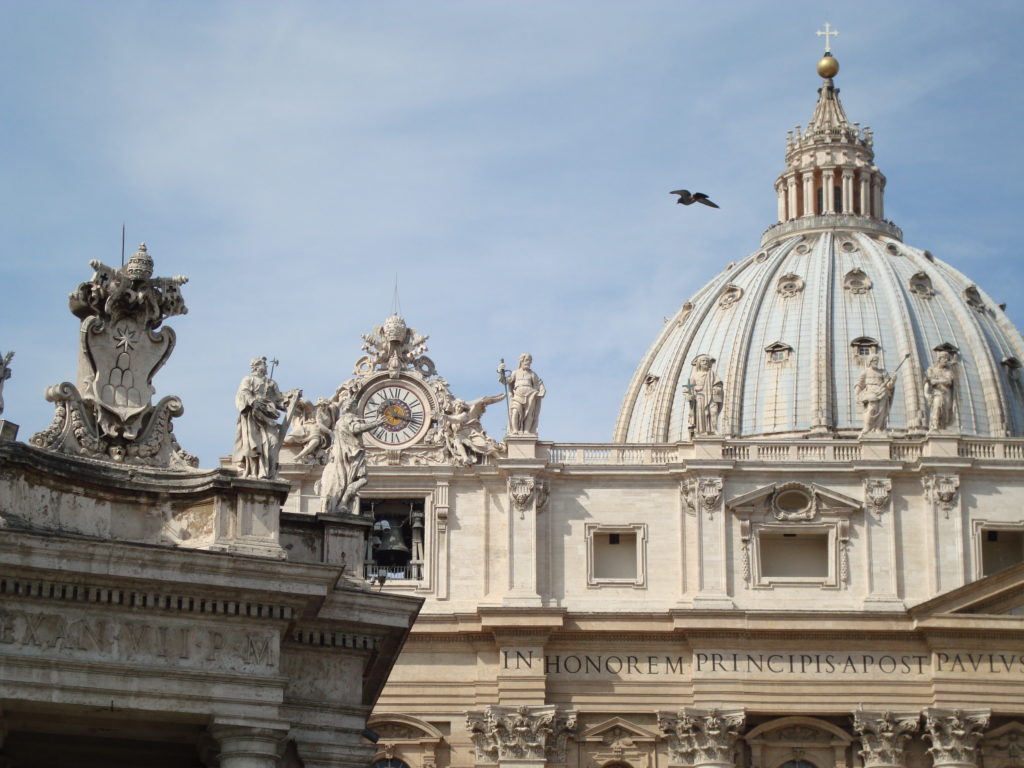 A little boy finally sat down after first resisting his parents’ command to do so. He said to his parents, “I’m sitting down on the outside, but I’m standing up on the inside.”

We live in a time when few want to submit to any kind of authority. I trust you’ve seen the bumper sticker: “Resist authority.”

When it comes to religion, few people want any type of authority. David Wells in the book God in the Wasteland argued that he modern concept of God is a weightless God—what he means by a “weightless” God is that God’s commands simply do not weigh upon people; people, in other words, just don’t pay attention to what God has said. I can’t tell you how many times I’ve read a passage straight from Scripture and someone will say, “That’s your opinion; I don’t see it that way.” And, I simply read straight out of the Book.

The last couple of weeks, we’ve explored some of the problems with Catholicism. Tonight, I want us to look at the real problem with Catholicism—and many other denominations—and that is the way they view authority. As we explore “Authority in Catholicism,” must of what we say can and will apply to several other religions.

According to Catholicism, Scripture Came from the Church

The Cathlic Church claims to have determined which books belong in Scripture. Notice from the Catechism of the Catholic Church, “It was by the apostolic Tradition that the Church discerned which writings are to be included in the list of the sacred books” (paragraph #120, p. 34). According to Catholicism, then, the church decided which books were authoritative and which were not.

However, the books claim authority for themselves—the church did not confer authority upon them. “According to the Lord’s own word, we will you that we who are still alive, who are left till the coming of the Lord, will certainly no precede those who have fallen asleep” (1 Thess 4:15). Concerning the Lord’s Supper, notice what Paul wrote “I received from the Lord what I also passed on to you” (1 Cor 11:23).

The church in no way conferred authority on the book of Scripture rather the church accepted the books of Scripture because they are authoritative.

Because in Catholic theology the church gave the world the Scripture, the church has the right to interpret Scripture. Notice from the Catechism of the Catholic Church: “The task of giving an authentic interpretation of the Word of God, whether in its written form or in the form of Tradition, has ben entrusted to the living, teaching office of the Church alone. Its authority in this matter is exercised in the name of Jesus Christ. This means that the task of interpretation has been entrusted to the bishops in communion with the successor of Peter, the Bishop of Rome” (paragraph #85, p. 27).

The interpretation of the Word of God cannot belong to the church, for Jesus and the apostles encouraged the study of Scripture. Notice what Jesus said about marriage and divorce: “Have you not read. . . ?” (Matt 19:4ff). When the Sadducees asked about marriage and the resurrection, Jesus replied, “You are in error because you do not know the Scriptures or the power of God” (Matt 22:29). Notice that Jesus did not say: “You are in error because someone hasn’t explained the Scriptures to you.”

Further, notice the praise that Luke heaps upon the Bereans: “Now the Bereans were of more noble character than the Thessalonians, for they received the message with great eagerness and examined the Scriptures every day to see if what Paul said was true” (Acts 17:11). Luke doesn’t say, “They should have just listened to Paul—they shouldn’t be going and looking and Scripture.” In fact, before the Protestant Reformation, the Catholic Church didn’t want the people in the pew even to have a Bible, because “they could not understand it.” But Luke praised the Bereans because they didn’t just take Paul’s word for it, but they explored the Scriptures. If the Bereans could not just take the word of an apostle at face value, but compared his words to Scripture and were praised for it, how dare we ever take a man’s word about what God wants us to do!

Because the church interprets Scripture in Catholic theology, the church cannot make doctrinal errors. Notice from the Catechism of the Catholic Church: “The whole body of the faithful . . . cannot err in matters of belief. This characteristic is shown in the supernatural appreciation of faith on the part of the whole people, when, from the bishops to the last of the faithful, they manifest a universal consent in matters of faith and morals” (paragraph #92, p. 28). Two lines of argument show this claim to be spurious:

Notice what Paul wrote to the Corinthians: “You are still worldly. For since there is jealousy and quarreling among you, are you not worldly? Are you not acting like mere men? For when one says, ‘I follow Paul,’ and another, ‘I follow Apollos,’ are you not mere men?” (1 Cor 3:3-4). “I am astonished that you are so quickly deserting the one who called you by the grace of Christ and are turning to a different gospel” (Gal 1:6).

There is no universal consent in matters of faith and morals among Catholics.

According to a Gallup poll in April 2005—shortly after the death of John Paul II—78% of American Catholics believe birth control should be considered moral by the church, 63% of American Catholics believe that priests should be allowed to marry, 59% say that the church should have a less restrictive stance on stem cell research, and 55% say that women should be allowed to be priests. While I would agree with the official Vatican position only on stem cell research and women priests, this study demonstrates that Catholics do not “manifest a universal consent in matters of faith and morals.”

According to Catholic Theology, Tradition is Equal to Scripture

Notice these quotes from the Catechism of the Catholic Church regarding the role of tradition:

Tradition cannot be placed on equal footing with the Word of God.

One: He claims that the scribes and Pharisees had given tradition equal footing with Scripture.

The scribes and Pharisees can’t understand why Jesus’ disciples eat without first ceremonially washing their hands. Notice Jesus’ response in verse 8: “You have let go to the commands of God and are holding on to the traditions of men.” In other words, Jesus says, “You don’t care what God says; you have these traditions that you’re sitting on the same level as Scripture. You want to make my disciples wash their hands because you do.” Isn’t that exactly what Catholicism has done—to place tradition on the same level as Scripture?

Two: He claims that the scribes and Pharisees have abandoned the Word of God for their traditions.

Instead of obeying the command to honor father and mother, the scribes and Pharisees were using “Corban.” Apparently, “Corban” was giving money to the temple or some other religious cause and telling Mom and Dad, “I can’t take care of you, because I’ve given all this money to Corban.” In this specific instance, Jesus says that the traditions of the scribes and Pharisees violate the Word of God.

From Mark 7:1-13, then, we see two says that traditions are sinful: When we bind traditions on others and say, “You have to do it this way,” and when traditions violate the Word of God. Therefore, tradition simply cannot have the place given it by Catholics.

Scripture and Scripture alone is our authority in matters pertaining to God. “All Scripture is God-breathed and is useful for teaching, rebuking, correcting and training in righteousness, so that the man of God may be thoroughly equipped for every good work” (2 Tim 3:16-17). When I want to know what is right and wrong, I can’t appeal to my thoughts, to my feelings, to church tradition, to church teaching, but to Scripture alone. Are you being obedient to Scripture, or do you need to come tonight and pledge allegiance to Scripture alone?