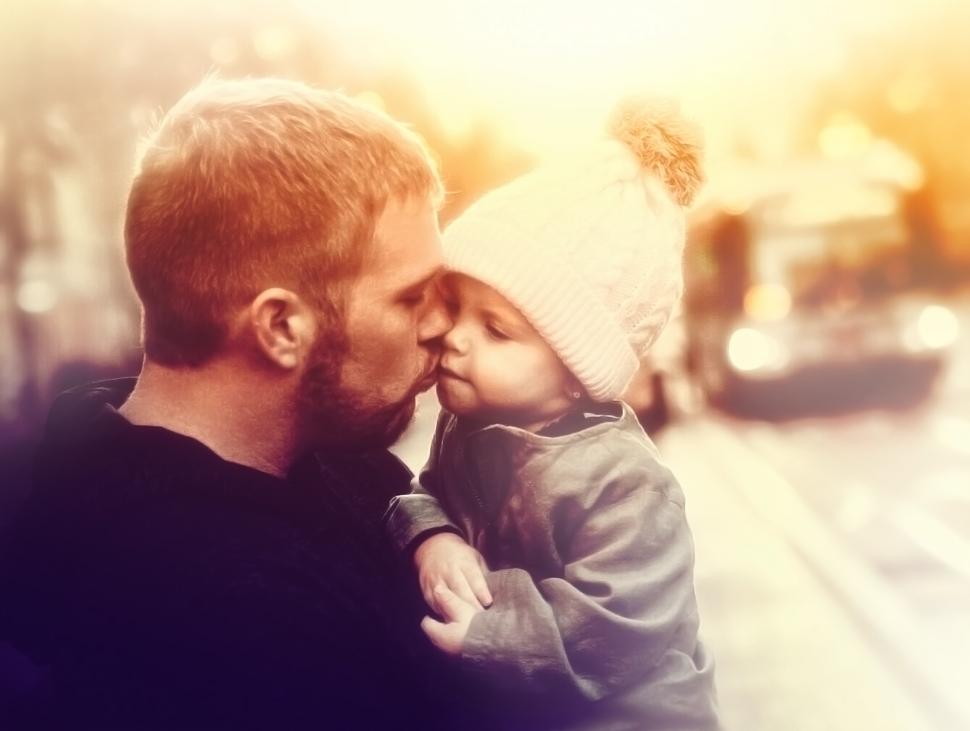 The following excerpts were published in a Milwaukee newspaper from essays entitled “My Pop’s Tops!” “My pop’s tops. He lets me hoe the garden, even when I don’t want to.” “My pop is willing to help with the housework, although he complains about it a little – quite a bit, really. In fact, he hollers. Well, to tell the truth, he won’t do no housework at all!” “My pop’s tops! One time he took me to the lake and threw me in to see whether I could swim. I couldn’t. My pop saved my life.” “My pop is a farmer. He smells like a cow. And when I come in and smell a cow in the house, I know my pop is home, and I’m glad.”

Children love their fathers. There is nothing in the world like a mother’s love. But, at the same time, there is nothing quite like a father’s love, either. We’ve been told for years that fathers really aren’t needed – that all a child needed to be complete was a mother. We know, however, that that isn’t true. Dr. T. Berry Brazelton, one of America’s leading pediatricians, writes, “Where there is an active father, the child grows up to be more successful at school, to have a better sense of humor and to get along better with other kids. He believes in himself and is better motivated to learn.”

Truly, what children need in their lives are not just fathers – they need Christian fathers. Children need to know that their father loves Jesus, is striving to be like Jesus, is serving the church, and is on his way to heaven. Every child deserves that! This morning we want to look at a role model of a father, Cornelius. He was the perfect daddy—almost!

Cornelius Was a Good Man, v 2

Cornelius was a devout man. “Devout” means to be godly, pious, reverent. Cornelius was a man of deep religious convictions and he was holy in his conduct. God’s people have always been devout. “Enoch walked with God” (Gen. 5:24) – He had a close relationship with God. Noah was righteous, blameless in his “generation (Gen. 6:9). Barnabas was a “good man, full of the Holy Spirit and of faith” (Acts 11:24). Fathers, are you a devout man? Do you have deep religious convictions? Are you holy in your conduct?

Cornelius feared God. “To fear God” means to have respect, reverence for him. Cornelius showed God the respect and honor that was due him. We need to give God respect and honor as well. “Honor all people. Love the brotherhood. Fear God. Honor the king” (1 Pet. 2:17). “Let us have grace, by which we may serve God acceptably with reverence and godly fear” (Heb. 12:28). Fathers, do you respect God? Do you set aside daily time to study Scripture to see what God wants you to do? Do you worship with a realization that God is greater than you and with a desire to show him honor? When you make a decision, is your test, “Is this what God would want me to do?”

Cornelius was a giving man. Cornelius gave alms generously to all the people (the Jews). Cornelius was a man who cared deeply about people and was willing to put his pocketbook where his heart was. We need to be generous as well. Acts 4:34-35. There weren’t any in the early church who lacked for what he needed due to the generosity of those who could give generously. Among us there should not be any who needs anything due to our generosity. “Then the disciples, each according to his ability, determined to send relief to the brethren dwelling in Judea” (Acts 11:29). Fathers, how giving are you? When was the last time your children saw you give to Potter’s Children’s Home? When is the last time they saw you sacrifice so that you could buy Christmas gifts for a family who didn’t have as much as you?

Cornelius was a praying man. Cornelius prayed to God always. This obviously means that he prayed to God regularly. Luke does not tell us for what Cornelius prayed, but the angel told him that his prayers had come as a memorial before God (Acts 10:4). We, too, need to be praying people. “Evening and morning and at noon I will pray, and cry aloud” (Ps. 55:17). Paul describes a true widow as one who “continues in supplications and prayers night and day” (1 Tim. 5:5). Fathers, how prayerful are you? Do you have a regular, set time for prayer? When was the last time you lifted your children’s names before God’s throne in prayer?

Cornelius was a just man. Just means to be upright, righteous. The term means that one confirms to the laws of God and man. This term was used for model citizens in the Greco-Roman world. We are to be righteous people. “Awake to righteousness, and do not sin” (1 Cor. 15:34). “But you, O man of God, flee these things and pursue righteousness, godliness, faith, love, patience, gentleness” (1 Tim. 6:11). Fathers, how upright or righteous are you? Are you striving to confirm to the laws of God and man?

Cornelius was a well-thought-of-man. Cornelius had a good reputation among the Jews – that’s quite a feat, for he was a Roman soldier keeping the Jews subject to Rome. We need to guard our reputation. “A good name is to be chosen rather than great riches” (Prov. 22:11). An elders “must have a good testimony among those who are outside” (1 Tim. 3:7). Fathers, what about you? What type of reputation do you have?

Cornelius Was a Lost Man

It might surprise some people that Cornelius needed to be saved:

Cornelius had to know and obey the Gospel of Jesus. Peter came and shared that Gospel with him. While Peter was speaking, the Holy Spirit fell upon Cornelius and his household to show Peter and those with him that Gentiles were acceptable candidates for salvation (Acts 11:15-17). When Peter realized this, he commanded that Cornelius and his household be baptized in the name of the Lord (Acts 10:48).

Cornelius was the perfect daddy—almost! He was such a good man, but he didn’t have Jesus in his life. Daddies and mommies can never be all they need to be if they are outside of Jesus.

With all the good that we have said about Cornelius this morning, we can say something else – when he knew what to do, he did it. He didn’t wait around saying, “I’ll do it some other day.” He knew that he sat an example for his family, and he was willing to stand up and be counted for Jesus.

What about you? No doubt your children have given you something nice for Fathers’ Day. But, you can give them an even greater gift this Fathers’ Day – a godly home. Do you need to come to Jesus as we stand and sing?