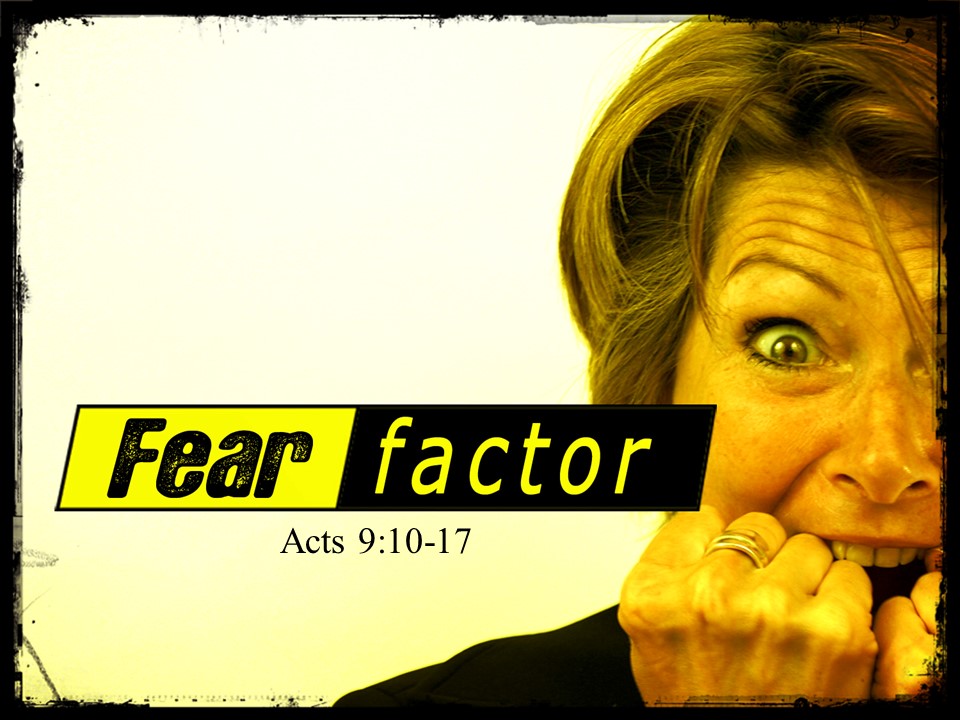 When RJ was little, he was a big fan of the show Fear Factor. On that show, contestants would compete to see who could be the most courageous in the face of some outrageous stunts. One stunt asked women to lie down in a plexiglass tank, and while in the tank, the women were covered in 400 rats. Another stunt asked contestants to hang outside a helicopter while it flew over a fiery explosion.

RJ would watch the show every week. Every morning when RJ woke up, he would run to Tammy and say, “Mommy, let’s play peer pactor.” Tammy would then need to come up with several “stunts” to keep him occupied for a while.

People seemed to enjoy Fear Factor for a while–it allowed them to face their own fears from the comfort of a den. But, it is not fun to have to face your fears. I have a very profound fear of tornadoes. When I was four a tornado swept through the neighborhood where I grew up–It is earliest thing I can really remember in my life. I vividly remember spending the night in the basement at our neighbor’s house. I remember the rescue crew coming to check on us; It even seems that Dad went out and helped look for people. I can remember a trailer park just down from our house–they had been tossed around like toys. As a child, I was always terrified when there was any possibility of tornadoes. In Alabama, I had to overcome that fear. In Alabama, we had to be very weather aware. We were living in Florence when the April 27, 2011 outbreak occurred. I was still terrified, but I had a family to take care of. I had the responsibility of making sure they were in a tornado shelter when the storms would come.

I have no doubt but that each of you has some fear–maybe you’re afraid of snakes or mice or spiders, etc. Sometimes you have no choice but to face your fear head-on.

Scripture is full of people who faced their fears head-on. Shadrach, Meshach, and Abed-Nego would not bow the knee to Nebuchadnezzar’s golden image in spite of the threat of a fiery furnace. Daniel did not allow Darius’ decree to keep him from praying three times a day, but he continued to pray in spite of the threat of being fed to lions. The apostles did not allow the threat of imprisonment, beating and death prevent them from preaching in the name of Jesus Christ!

This morning’s text is about a man who had to overcome his fear to serve Jesus. In fact, his fear is so great that he objects to a simple, straightforward command of Jesus. Yet, Jesus will not take “No” for an answer, but He pushes His servant to do right. From Ananias’ encounter with Jesus we learn an important lesson: “Jesus asks us to face our fears.”

We’re introduced to Ananias and the fact that he’s living in Damascus. Notice the willingness of Ananias to do the Lord’s bidding–when the Lord calls, Ananias says, “Here I am, Lord.”

Jesus tells Ananias where he can find Saul. Apparently, Judas is a Jew, not a Christian. More than likely, Paul made arrangements to stay with Judas before he ever left Jerusalem.

Ananias is told that Saul has seen a man named Ananias coming in and giving him back his sight.

Ananias had heard all the harm that Saul had done to Jesus’ saints in Jerusalem. It’s obvious that Ananias is yet to hear that Saul has had an encounter with Jesus. Bad news always travels much faster than good news. Even if Ananias had heard that Saul had encountered Jesus, he may not have believed that his conversion was genuine. We, too, would likely have a hard time believing a former persecutor of the faith had been converted.

This is the first time in Scripture that Christians are called “saints.” The Greek word refers to those who are set apart, separated. The idea is that the people of God are to be different from the rest of the world.

Why did Ananias say what he does here? In Scripture, when the Lord asks something of someone, the typical response is simple obedience, not giving your opinion. So, what’s going on? It seems that Ananias wants to be very clear that he understands this command–it runs counter to everything he’s heard. He’s very likely frightened. If he goes to Saul, he’s likely going to die an excruciatingly painful death. If he dies, he’s very likely going to be leaving a family behind. Ananias was likely a leader in the church at Damascus. What happens to the church if Ananias dies?

Any fears Ananias might have had were unfounded–Saul is a chosen instrument to take Jesus’ name before many people.

Jesus will show Saul what he must suffer–the one who inflicted great suffering is himself going to suffer a great deal.

This is a great verse of obedience: “Ananias went his way and entered the house.” Whatever fears Ananias may have had became secondary to obeying the command of Jesus.

“Jesus asks us to face our fears.” Jesus asks Ananias to face his fears. Jesus asks you to face your fears. You cannot go to heaven if you refuse to face some fears: “But the cowardly, unbelieving, abominable, murderers, sexually immoral, sorcerers, idolaters, and all liars shall have their part in the lake which burns with fire and brimstone, which is the second death” (Rev 21:8). We mentioned earlier that many people in Scripture faced their fears head-on; Scripture also contains many people who gave in to their fears and sinned grievously. Peter denied he even knew who Jesus was. Many Jewish leaders believed on Jesus, but they refused to confess Him, lest they be put out of the synagogue (Jn 12:42-43).

Many people have fear when becoming a Christian.

What is my family going to think? I’ve known many people who had to turn backs on family in order to become a Christian. What are my friends going to think?

Maybe you find yourself in that situation this morning. You’re worried about what your husband/wife, father/mother, etc. might think. You’re worried that you might lose some good friends if you become a Christian.

Jesus asks you to face those fears. Luke 14:26. We must do right in spite of what others might think, because Jesus must come first.

Many people have fear when sharing their faith.

What are people going to think? Many folks don’t want to hear biblical truth. What if someone ends up getting angry and I lose a friend?

Jesus asks you to face those fears. In our text, Ananias is called upon to overcome that fear. Jesus asks Ananias to go to one who had come to Damascus to kill Christians. Do you really believe you’ll be putting your life in jeopardy if you share the Gospel?

Do you know how you can overcome fear in evangelism? Matthew 28:19-20. Jesus promises to be with you when you knock on that door, as you sit in that living room!

Many people have a fear of being different from others at work, home, neighborhood, etc.

Some people are so fearful of what their peers are going to think that they act just like everyone else.

Jesus asks you to overcome that fear. In Acts 9:13, Christians are called “saints”–people who are different from the rest of the world. The majority of people are going to be lost (Matt 7:13-14). Then, why would we want to be like everyone else?

Where would this congregation be if we fully understood “Jesus asks us to face our fears“? We’d turn this community upside down! We’d share the gospel with everyone we encountered. We’d be committed to doing right. Every one of us would be faithful in walking with Jesus.