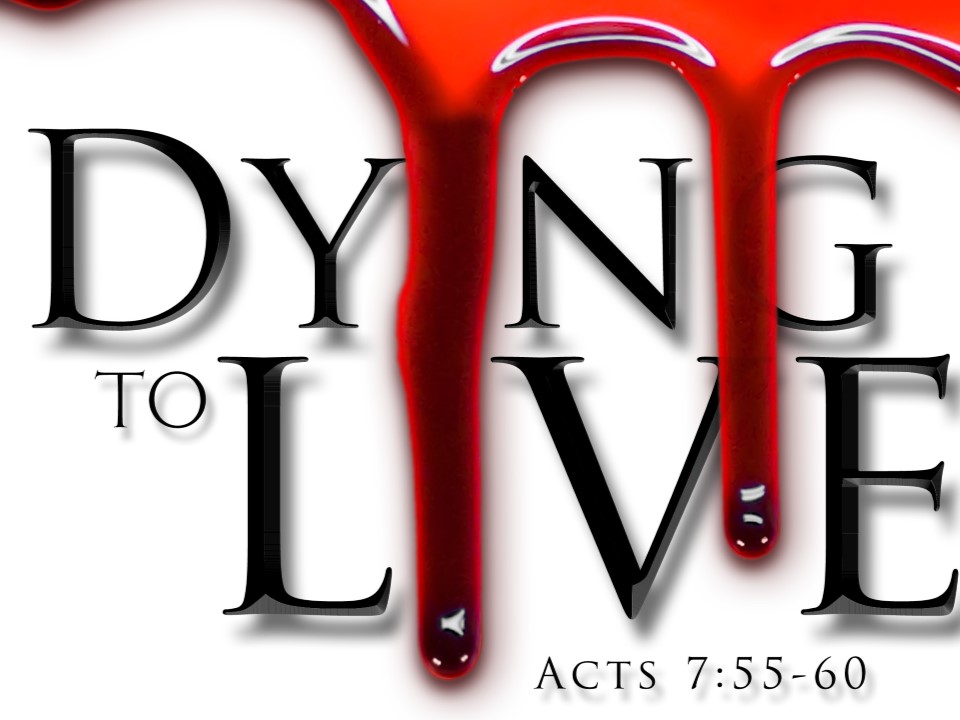 When I was a kid, I couldn’t wait to grow up, be an adult, and live life the way I wanted. Boy, has that ever turned out to be a disappointment! I lost a job that I absolutely loved. My health leaves much to be desired. There are days that I can barely move my legs at all. Climbing stairs is quickly becoming a thing of the past. There are days that the pain is almost unbearable. Swimming and medication help greatly, but neither can totally eradicate the pain. The only time I ever really feel good is when I’m swimming, so I try to swim as long and as often as possible.

But, you know that’s not true. . . Stephen was having the best of days. You see, Stephen was Dying to Live. On January 1, 2010, a dear man of God left this world quite unexpectedly. While Don was in a surgery that was a last-ditch effort to save his life, I told his soon-to-be widow, “Don’s getting ready to live. We don’t even know what life is this side of eternity.” I believe that is the truth of God: “Whoever lives and believes in Me shall never die” (Jn 11:26). Bodies die. Souls live.

We see that in Stephen’s martyrdom. Stephen, as he prepares die as the first Christian martyr, is permitted to gaze into heaven and to see the glory of God. As Stephen is dying, God allows him to know beyond any doubt: “Glory awaits the faithful.”

Stephen is able to see the glory of God–what a brilliantly bright sight that must have been!

Stephen sees Jesus standing at the right hand of God. This is the only time in Scripture that Jesus is depicted as standing at God’s right hand. There are many ideas about why Jesus is depicted as standing here. I think there are a few ideas that have a great deal of merit. Standing is a sign of respect. I do think that part of this is that Jesus is showing respect to the first Christian martyr. Judges in this day stood when they rendered a verdict. Stephen is in the process of being judged by the Sanhedrin. Jesus stands in judgment, not upon Stephen, but upon the Sanhedrin. It is also possible that Jesus is standing as Stephen’s Advocate to plead his cause before the Father.

Jews in the days of Stephen believed that no one had the authority to be at God’s right hand.

Therefore, they act as they do. They cried out with a loud voice and stopped their ears–they sought, in a rather immature way, to hear no more of what Stephen had to say. They ran at him with one accord–They act as a mob determined to take care of Stephen.

They cast Stephen out of the city and stoned him. Under Jewish law, a condemned criminal would be taken outside the city. He would be thrown over a drop at least twice his height. The witnesses of his crime would be the first to throw stones. They would aim for his chest, but precision wasn’t all that possible. They would keep up this process until the person was dead.

Before they stoned someone, the Jews would strip him of his clothing, an exercise of a final humiliation. Luke, however, doesn’t record that the Sanhedrin stripped Stephen of his clothing; they may have, but it’s not recorded.

Stephen dies in much the same way Jesus did, and, as I’ve said before, I think Luke intentionally draws parallels between Jesus and Stephen.

Stephen was stoned as he was calling on God. Peter had said that whoever called on the name of the Lord would be saved (Acts 2:21). But, Stephen dies as he called upon God; what’s up with that? Obviously, I think Peter speaks of calling on the name of the Lord in a different way back in Acts 2. But, Stephen does get salvation here in a big way; the implication is quite clear in this text: God takes Stephen to Paradise.

Stephen fell asleep. Is not that a beautiful word to describe Stephen’s violent death? Of course, “sleep” is a common Christian euphemism for death. But, I don’t think Luke is simply attempting to describe death euphemistically. I really do think he’s trying to draw a contrast between the violence of Stephen’s murder and the peaceful way that Stephen died. Instead of attempting retaliation, Stephen’s body simply went to sleep.

“Glory awaits the faithful.” In the midst of all the suffering you and I must do in this world, we can take comfort in knowing that “Glory awaits the faithful.” But, how does that help me when I’m in the midst of a daily struggle of suffering? Stephen is able to do four things which allow him to die so peacefully. We want to see how we can do the four things Stephen does.

One: You must STAND on truth.

Stephen has stood on truth and for truth, and, you understand, it’s because of that truth that he loses his life in this passage. Throughout his speech in Acts 7, Stephen proclaims the truth of the Old Testament. It becomes very uncomfortable for the Sanhedrin as Stephen applies that truth to their situation.

Do you have a firm grasp of Scripture? Do you know the promises of God? Spend some time in Scripture learning the great promises of God. Get a concordance or a Thompson Chain Reference Bible (you can find both of those online these days). Find the promises of God you need to know–Do you need to know about His protection over sin or death or loneliness? Write those verses somewhere you can easily access them–write them in the front of your Bible, tape them to your mirror, or somewhere else you can easily access them.

If you’re to remain faithful in a hostile world, you must STAND on truth!

Two: You must SEE Jesus.

Stephen saw Jesus as he was about to die. Can you even begin to fathom how much a comfort that would have been to Stephen, to be able to gaze into heaven and see the glory of God and Jesus standing at God’s right hand? If we want comfort when we are suffering, we must SEE Jesus.

You understand that we can go to Scripture and through the inspired Word we can SEE Jesus. There are a couple things we see as we explore Jesus’ suffering:

Three: You must SHOW MERCY.

Stephen shows great mercy. He forgives those who are stoning him; he prays that the Lord not charge them with their sin. To be blunt: If you were dying, could you offer forgiveness with one of your final breaths?

Four: You must SUPPLICATE.

Yet, notice the first Christian martyr is praying in the midst of his suffering. Why would Stephen pray as he’s dying? He knows that he has nowhere else to turn. He knows that Jesus can help. He knows he’ll be with the Lord shortly.

Why should we pray in the midst of our suffering?

Are you ready to be with the Lord even now? Stephen was “Dying to Live.” He laid aside this garment of flesh and was clothed with life in the Paradise of God. What if you were to leave this world today? Would you be with the Lord?