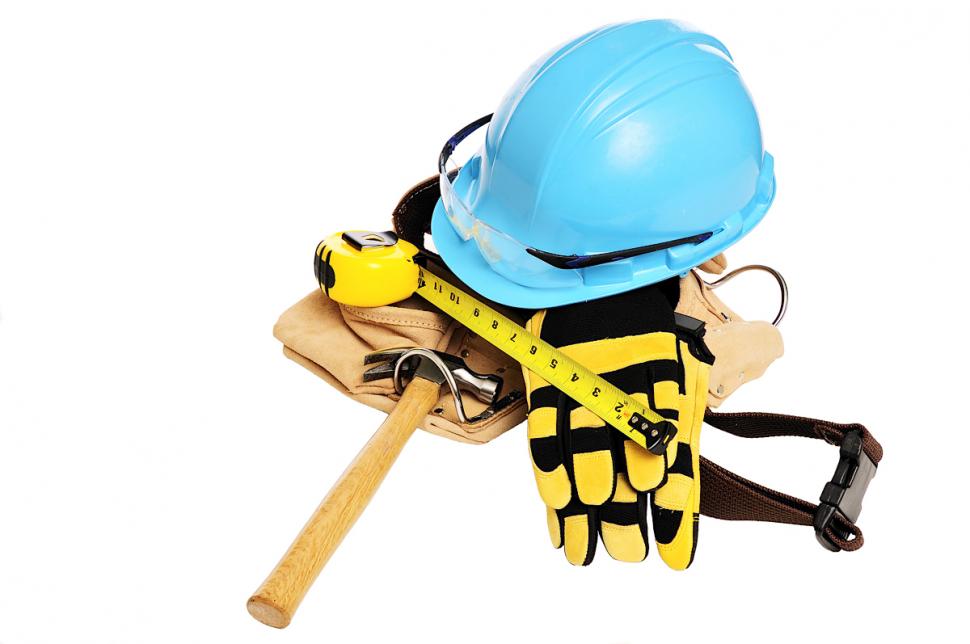 A gentleman stood watching the construction of a large new church edifice. In particular, his attention was drawn to three stone masons. In turn, he asked each one what he was doing. One said, “I’m earning twenty dollars a day.” The second replied, “I’m setting a stone.” The third one said, “I’m building a cathedral.” Obviously they were doing the exact same thing, but each had a different outlook.

What is it that we are doing as a congregation? Is this time when I stand here and preach just a boring half hour to be endured? Is the time you teachers spend in Bible class just to be tolerated so that Mom and Dad can have a few minutes of peace and quiet? Is our sending House to House – Heart to Heart into this community just a neat advertising gimmick to increase our contribution and membership rolls down the line? Or, are we involved in an important and vital work, the work of “Constructing a Christian”?

There is no more important work on this earth than that of “Constructing a Christian.” That was the instruction of the Lord Jesus before he ascended back to the Father: “Go . . . and make disciples of all nations, baptizing them in the name of the Father and of the Son and of the Holy Spirit, teaching them to observe all that I have commanded you” (Matt 28:19-20). Notice that Jesus doesn’t just want disciples made, but he wants them built. The apostles were not simply to baptize new believers, but they were to build them up by teaching them the observance of everything Jesus had taught.

Prayerfully, we parents are in the business of building our constructing our children into Christians. “Fathers, do not provoke your children to anger, but bring them up in the discipline and instruction of the Lord” (Eph 6:4). What more important legacy could we parents ever leave than children who are faithful to the Lord Jesus?

We also have an obligation to construct ourselves into sturdy Christians. “Let us leave the elementary doctrine of Christ and go on to maturity” (Heb 6:1). The Apostle Paul is an example of one who worked at constructing himself: “Saul increased all the more in strength, and confounded the Jews who lived in Damascus by proving that Jesus was the Christ” (Acts 9:22).

This morning’s text is about how more mature brethren can help construct new Christians. This passage does concern the bestowal of the supernatural measure of the Spirit on new Christians, gifts that Luke makes abundantly clear are no longer available. When the apostles heard of the Samaritans’ conversion, they sent Peter and John to give these new brethren the miraculous measure of the Spirit. Why didn’t Philip give these new Christians miraculous spiritual gifts? Would it not have been much easier for Philip to give these gifts since he was already in Samaria? Why have the apostles travel in order to give these gifts? Luke informs us precisely why Philip didn’t give the Samaritans this gift: “Simon saw that the Spirit was given through the laying on of the apostles’ hands” (Acts 8:18). Because there are no apostles today, this gift of the Spirit is no longer available.

I don’t want to spend a lot of time this morning looking at the miraculous aspect of this text. I really don’t believe that I need to demonstrate that the specifics of this text cannot be replicated today: Luke makes it obvious that only the apostles could give this gift and you well know that. If I were speaking to a group struggling with spiritual gifts, I’d spend a great deal of time pointing out the first-century, never-to-be-repeated nature of this text. Because we know that truth, I want to construct upon that knowledge and see what we can apply in this modern age. Even though we cannot duplicate the specifics of this passage, there are many principles we can apply to strengthening new brethren today.

The apostles “laid their hands on [the Samaritans] and they received the Holy Spirit.” If we wish to build successfully, you must have a blueprint, a standard, a code; when one is building Christians, the Holy Spirit serves as the “Construction Code.”

In this passage, the Holy Spirit acts miraculously as the “Construction Code.” While we don’t know what miracles the Samaritans performed with the Spirit’s power, they must really have been something-Simon the sorcerer wanted that power for himself. In the early church, as far as I can tell, the miraculous measure of the Spirit served two main purposes:

Thus, the Holy Spirit provided the Construction Code-i.e., the will of God-whereby these Samaritan Christians could be built up in the faith.

The Holy Spirit continues to provide A Construction Code through the Scriptures he inspired. The Scriptures do come from the Spirit: “No prophecy of Scripture comes from someone’s own interpretation. For no prophecy was ever produced by the will of man, but men spoke from God as they were carried along by the Holy Spirit” (2 Pt 1:20-21). The Scriptures establish the validity of Jesus’ message. “Now Jesus did many other signs in the presence of the disciples, which are not written in this book; but these are written so that you may believe that Jesus is the Christ, the Son of God, and that by believing you may have life in his name” (Jn 20:30-31). We no longer have any need for the miraculous measure of the Spirit, for the Scriptures establish the truthfulness of God’s Word.

The Scriptures are-like the words spoken by Spirit-inspired men-the very words of God. Throughout the New Testament, the authors claimed to speak the very words of God. “This we declare to you by a word from the Lord” (1 Thess 4:15). “I received from the Lord what I also delivered to you” (1 Cor 11:23). Thus, we have in the Scriptures precisely the same benefits that the early Christians had through the miraculous measure of the Spirit.

What does all of this have to do with “Constructing a Christian”? Simply put, the Scriptures provide precisely the same benefit as the miraculous measure of the Spirit in the first-century. Our faith can be greatly strengthened through a serious study of Scripture. To the Ephesian elders Paul declares: “Now I commend you to God and to the word of his grace, which is able to build you up and to give you the inheritance among all those who are sanctified” (Acts 20:32).

Former President Woodrow Wilson once said, “I ask every man and woman in this audience that from this day on they will realize that part of the destiny of America lies in their daily perusal of this great Book.” Issues much more serious than the “destiny of America” lie in the daily perusal of Scripture! Heaven and hell hang in the balance. Do we spend time in Scripture seeking to know God’s will that we might grow? Do we seek to help others know the will of God that they, too, might grow?

“Now when the apostles at Jerusalem heard that Samaria had received the word of God, they sent to them Peter and John, who came down and prayed for them that they might receive the Holy Spirit, for he had not yet fallen on any of them, but they had only been baptized in the name of the Lord Jesus.”

The apostles at Jerusalem served as “A Construction Crew” for their new brethren in Samaria. The apostles sent Peter and John to the Samaritan church. The church in Jerusalem understood that the new brethren needed guidance to grow in the faith.

We understand that physical children need much care. However, few need the care that Tracinda Foxe’s little boy needed. In December of 2005, Foxe’s apartment building in the Bronx caught fire. With flames quickly engulfing her third-floor bedroom, she was forced to lean out the window with her one-month-old baby boy. Finally, with all other options exhausted, Tracinda let go. The infant tumbled three stories down into the waiting arms of Felix Vazquez, a Housing Authority employee and catcher on a local baseball team. A former lifeguard, Vazquez performed mouth-to-mouth resuscitation on the baby until paramedics arrived, which saved its life. Moment later, Tracinda was rescued from her apartment by firefighters, and was reunited with her child. Neither was seriously injured. Ms. Foxe, Mr. Vazquez, the paramedics, physicians all came together to save that little boy’s life. In a spiritual sense, we see the same thing taking place here-the apostles as a whole hear about their new brethren in Samaria and decide to send Peter and John to help them.

Today, many are needed to strengthen new converts. Romans 12:6-8. With the exception of the gift of prophecy, these gifts are still available and many are important in the growth of new disciples. New Christians often need someone to serve them as they find their niche in the congregation; they need the encouragement of their fellow brethren urging them to keep going; they need teaching to help them understand more fully the will of God.

How might the history of this congregation be forever altered because some decide they will become “A Construction Crew”? Who might become a great Bible class teacher because some of you decided to build him/her up in the faith? Who might become a great encourager because one of you this very morning decided to encourage him? Who around you this morning needs “A Construction Crew”? Who might seriously be considering some sin that will take him far from God and rob his soul of glory if you don’t help build him up? Who might be on the verge of walking away from the truth and aligning with error unless you take the time to build him up?

Can we not pray for others to be built up in the faith? Paul prayed for the Ephesians to be built up in the faith: Ephesians 3:14-19. Paul prayed very similarly for the Colossians: “From the day we heard, we have not ceased to pray for you, asking that you may be filled with the knowledge of his will in all spiritual wisdom and understanding, so as to walk in a manner worthy of the Lord, fully pleasing to him, bearing fruit in every good work and increasing in the knowledge of God” (Col 1:9-10).

Shall we pray that others be built up in the faith? Do you yourself need to be constructed into a Christian? Is it that case that like Simon in Acts 8, you have heard, believed, and obeyed the Word of God, but you, like Simon, have wandered from the narrow way and, like Simon, need the prayers of your brethren? Is it the case that you, like the Samaritans before Philip ever arrives, have never come to Christ and need to believe the “good news about the kingdom of God and the name of Jesus Christ” (Acts 8:12) and be baptized this morning? If you need to come, won’t you come right now as we stand and sing?