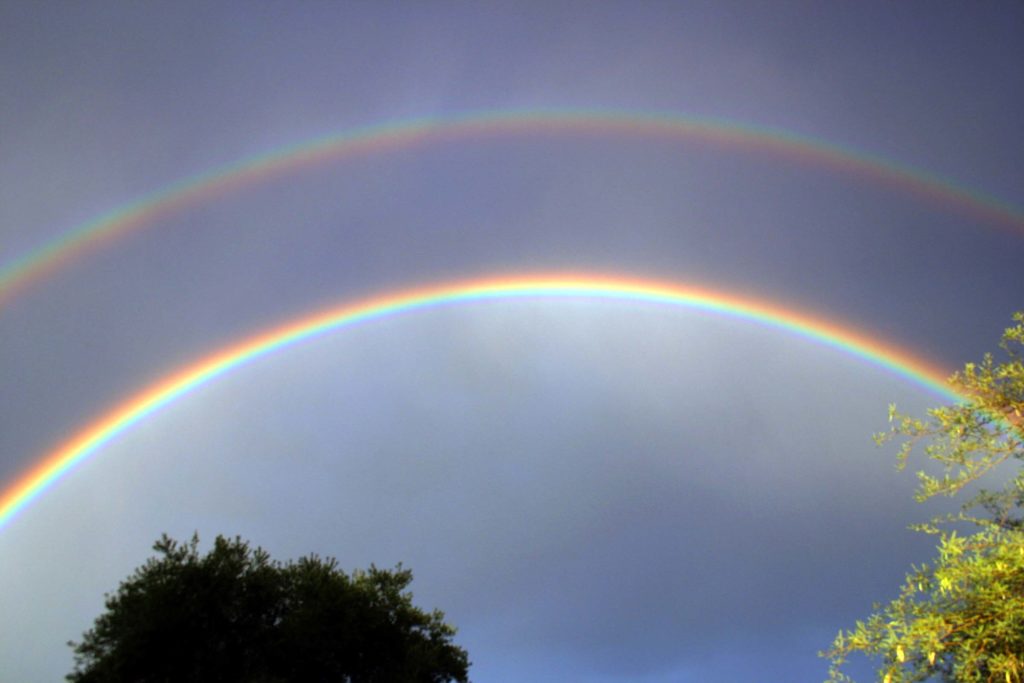 In one of Charles Schultz’s Peanuts comic strips, we see that the television is on but there is no one in the room listening to it. The announcer is talking about a golf tournament that is in progress. He says, “Smith has to make this putt to win the championship. There will be no tomorrow.”

At just that time, Lucy walks in and hears that there will be no tomorrow. She immediately goes into a panic and starts running around and yelling to the other children, “The world is coming to an end. They just announced it on television.” Her panic quickly spreads as all the Peanuts kids go about screaming wildly. Finally, in the last square we see all the children huddled on top of Snoopy’s doghouse waiting for the end of the world.

Elijah is one of only two individuals whom we know did not die. Enoch did not die: Genesis 5:24; here Elijah does not die. This tells us that Enoch and Elijah must have been quite special people.

Unless Jesus comes first, there isn’t a one of us who will leave this world alive. When David was about to die, he calls for Solomon and says, “I am about to go the way of all the earth” (1 Ki 2:2). How could the Hebrew euphemism for death be “the way of all the earth” unless death is universal? “Death spread to all men” (Rom 5:12). Even the perfect Son of God succumbed to the sting of death.

Death is universal, for sin is universal. Death is in this world because of sin: Romans 5:12. There is not a single person alive or dead-old enough to know better-who has not sinned: Romans 3:10-12.

Therefore, we know that God had a perfect purpose in allowing Enoch and Elijah to escape death. I have no idea what that perfect purpose was in relation to Enoch-quite frankly, the text of Genesis doesn’t tell us much about Enoch or his translation into Paradise. However, Elijah’s translation into heaven seems to have been to demonstrate both God’s power and God’s continuing work to Elisha. Elisha is about to take over the prophetic work of Elijah. The first time we read of Elisha in Scripture, Elijah is commanded to anoint him “to be prophet in your place” (1 Ki 19:16). The demonstration in this text demonstrates God’s power, God’s plan of succession, and God’s continuing ministry. From these events, Elisha would grasp his role in God’s plan.

You see, this text is a “succession text.” Just over a month ago, we had a succession in this nation as President Obama took the reigns of power from President Bush. The inauguration-as are all inaugurations-was marked with much pomp and circumstance. Part of the purpose of all that pomp and circumstance is to demonstrate the nation’s greatness and glory and to demonstrate that the leadership of the nation is changing hands.

This text, with all of its splendor, serves much the same purpose. Interestingly, there are any parallels between the succession of Elisha and the succession of Joshua. Both Moses and Elijah led their followers on dry ground. Both Moses and Elijah “died” outside the Promised Land. Both had bodies that weren’t found. Both of their successors crossed the Jordan on dry ground to begin their ministries in Canaan.

The author of Kings likely brings out these parallels purposefully. Elijah was a “new Moses.” Moses gave the Law and Elijah called people back to the Law. When Jesus was transfigured, both Moses and Elijah appeared with him (Matt 17:3). Elisha was a successor to Elijah in much the same way that Joshua was to Moses. As Joshua picked up Moses’ work of leading the Israelites into Canaan, Elisha picks up Elijah’s work of calling people to faithful obedience to the Law.

Tonight, we want to examine Elisha’s succession of Elijah and hold up Elisha as an example.

Three times Elijah tells Elisha to stop following him; however, Elisha continues to follow his master. Why would Elijah tell Elisha to stop following him? The text doesn’t tell us, so we’re left with our best guesses. The best guess seems to be that Elijah was testing Elisha. Just as the Lord tested Abraham to see his fidelity, Elisha is being tested to see what he’s really made of.

Elisha passes the test with flying colors; Elisha here demonstrates himself as a true disciple, one willing to follow his master.

If we were given a comparable test, how would we fare? Obviously, Jesus isn’t going to tell us to stop following him. But, let’s suppose for a moment that Jesus, in order to test us, told us to turn back and to follow after him no more. How well would we respond to that challenge? Would we say, “Okay, Lord” and turn back into a life of this world? Would we respond like Elisha and declare, “As the LORD lives, and as you yourself live, I will not leave you” (v 2)?

Elisha follows his master. Are you following the Master?

Elijah tells his disciple to ask what he wants before they are separated, and Elisha asks for a double portion of Elijah’s spirit. Elisha asks for his inheritance as a firstborn son (Deut 21:15-17).

But, why does Elisha want a “double portion” of Elijah’s spirit? On the one hand, it may simply be that Elisha simply frames his request in terms of inheritance laws in the Old Testament.

I wonder if Elisha doesn’t feel somewhat inadequate to carry on Elijah’s ministry. Elijah had done a great deal in Israel. He had miraculously increased the provisions of a poor widow during a famine, he had raised that widow’s son back to life, he had called fire from heaven to consume a sacrifice and then killed the prophets of Baal. Elisha may be quite fearful that he can’t rise to such expectations, thus he asked for a double portion of Elijah’s spirit.

Do we ever feel inadequate for the tasks God has given?

Some of my preaching brethren have had to follow preachers who have been at churches for quite a while. Men like Guy N. Woods or Gus Nichols or Ira North. I can’t imagine following a man such as Ira North at a congregation. I have no doubt that I would feel quite a bit like Elisha does in this text.

Elisha does a great deal of mourning in this text. Twice prophets come to Elisha and inform him that this day his master will be taken from him, and he says, “Yes, I know it; keep quiet.”

Some suggest that Elisha is telling the “sons of the prophets” to keep quiet because this is what the Lord has decreed. Therefore, there’s no need to discuss it. That would obviously be the case-whatever God has said is the way things are without question and without discussion. However, this may also be a sign that Elisha is experiencing great anxiety. He knows what’s coming, but it’s very difficult for him to speak of it.

When Elijah is taken up to heaven in a whirlwind, Elisha tears his clothes in two pieces. Such was the common sign of grief in the ancient world.

As Elisha is going back to Canaan, he strikes the water and says, “Where is the LORD, the God of Elijah?” (v 14). “Where is God” are words of deep, deep grief.

Why does Elisha demonstrate such grief in this text? Elijah didn’t really die. Granted, the body and soul were separated (cf. Js 2:26), but his body-like Jesus’ at his Ascension-was changed from one fit for the physical realm to one fit for the spiritual realm.

Elisha and Elijah are separated. Separation is painful. In working as a camp counselor, I can’t tell you how many times I’ve had to help kids call their parents because they were homesick. The kids just couldn’t handle being away from Mom and Dad. At OVU, I had some students who were homesick, desperately missing Mom and Dad.

The separation death brings is painful. There is going to be grief. I’m convinced this text teaches us something very important about dealing with grief. Elisha knows that Elijah’s going away at this time is the will of God, he knows he’s being taken up to heaven, and he sees the chariots of God come and take Elijah away, but he mourns deeply. This demonstrates quite conclusively that even when we know our loved ones are “safe in the arms of Jesus,” there is nothing wrong with grief.

The only requirement is that-if we grieve for those who die in Christ-that we “not grieve as others do who have no hope” (1 Thess 4:13). When we lose those close to us who die in Christ, let us grieve, but not so as those who do not know that death has been conquered.

I once asked my dad if he would rather conduct a funeral or a wedding. Quite honestly, neither are easy, and you’re always concerned that you may get your tongue twisted and say the wrong thing. Dad dryly said, “Son, I’ve conducted funerals where I had more hope than with some of the weddings I’ve done.” What about when you leave this world? Will the preacher have any cause for hope as he stands over your casket?

When Elisha strikes the water with the cloak that had fallen from Elijah, the waters parted just as they had for Elijah. The fact that he was able to do precisely as had his master would have been undeniable proof to Elisha that he had received the double portion of Elijah’s spirit. Throughout his ministry, Elisha performed multiple miracles just as Elijah had done-Elisha multiplied a widow’s oil, he raised a boy to life, he healed Naaman, and he even made an axe head float out of the Jordan when a man dropped it.

Ministry is never about a single person, but the work of God continues from generation to generation. 1 Corinthians 3:10. Jesus came to this earth and began a ministry. It is now up to us to WORK the ministry he began.

Obviously, you and I cannot carry out the miraculous part of his ministry as Elisha carried out the miraculous portion of Elijah’s ministry. However, much of Jesus’ ministry, the Lord expects us to perform in the modern world. Throughout the Gospels, we read of Jesus’ compassion on the sick, the hungry, and the hurting. We are to continue that compassion-Matthew 25:35-36. Throughout the Gospels, we read of how the Lord went about teaching about the kingdom of God. We are to continue that teaching-John 20:21b. While those words were spoken specifically to the Apostles, Matthew 28:20 makes clear that the instructions Jesus gave to the Apostles were to be delivered to others.

In this world, we are the body of Christ-we are his feet to go where he would go, we are his mouth to speak what he would speak, and we are his hands to touch those he would touch.