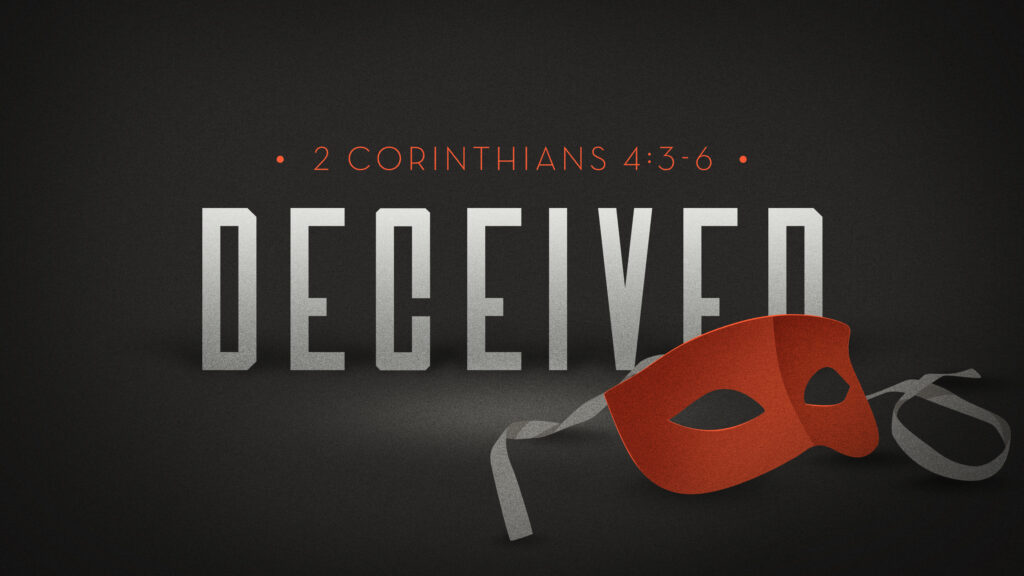 When I was in elementary school, our teacher passed out a Scholastic order form. Mom and Dad ordered me a couple books I wanted. One of the books was an autograph book, and, when it arrived, I took it home and got Mom and Dad to put their signatures in my book.

Well, my parents didn’t raise a dummy. I would occasionally get a bad grade, and I would be required to get a parental signature on my paper. When that happened, I’d go to my room, shut my door, very quietly turn the lock, get my autograph book out, and trace Mom’s signature on my paper. I’d give my assignment back to the teacher like nothing had happened. And guess what? I never got caught. Mom and Dad didn’t know what I had done until I fessed up a few years ago.

Satan is a far better liar than any of us. “You belong to your father, the devil, and you want to carry out your father’s desires. He was a murderer from the beginning, not holding to the truth, for there is no truth in him. When he lies, he speaks his native language, for he is a liar and the father of lies” (Jn 8:44). “Eve was deceived by the serpent’s cunning” (2 Cor 11:3).

If Paul’s gospel was veiled, it was only veiled to those who were perishing. Paul had made clear he rejected any lying or deception when he preached the gospel of Jesus.

However, Paul conceded the point that maybe his gospel was twisted and deceitful. He began the sentence by saying “even if”—the Greek construction “even if” often conveyed a tone of contempt. Paul was saying, “Okay, okay, you Corinthians want to accuse me of using improper techniques when I preach in order to twist the truth. I admit that my gospel is twisted. My gospel is veiled and not always plain.”

Paul’s gospel was not veiled to everyone, however; his gospel was only veiled to those who were perishing. The Greek phrase “who are perishing” points to the inevitability of those who are headed to hell. Unless there is a radical transformation, they stand no hope of preventing their destruction.

While we believe every word of Scripture, you don’t need the Bible to tell you Satan has great power; you live that reality—you know the strength of the temptations he brings against you, and you see what’s taking place in our nation and even in our neighborhoods.

They, therefore, cannot “see the light of the gospel that displays the glory of Christ, who is the image of God.” The gospel is not primarily about how we can be saved; the gospel from beginning to end is all about Jesus and his glory.

Because the gospel is about Jesus’s glory, Paul did not preach about himself, but he proclaimed Jesus Christ as Lord, and his companions and himself as servants for Jesus’s sake.

God who created light from nothing shone his light in “our hearts to give us the light of the knowledge of God’s glory displayed in the face of Christ.” Who is the “our” and “us” in this text? Well, context points to the fact that Paul was speaking about himself, Silas, and Timothy (cf. 2 Cor 1:19). Paul suggested inspiration here—he and other Spirit-filled preachers had God’s truth poured into their hearts.

If you are not careful, you can be swept away in the torrent of error. The Galatians were in danger of leaving truth for error: “I am astonished that you are so quickly deserting the one who called you to live in the grace of Christ and are turning to a different gospel—which is really no gospel at all” (Gal 1:6–7). If you are not careful, you can turn from the truth of the gospel and fall prey to the deceit of Satan; we know “Satan deceives those who do not believe.” How can you keep from being deceived?

To be a believer, you need to spend time in the Word.

The word of God was written in order to produce faith. John 20:30-31. “Faith comes from hearing the message, and the message is heard through the word about Christ” (Rom 10:17).

To be a believer, you need to investigate what you hear.

Satan lies, and he lies well. To keep from believing his lies, you need to investigate what you hear. If you do not investigate, the god of this world can blind your mind.

“By the word of the LORD a man of God came from Judah to Bethel, as Jeroboam was standing by the altar to make an offering” (1 Ki 13:1). The man of God proclaimed the word of God he was to deliver in Bethel, and he headed home. However, God had commanded him: “You must not eat bread or drink water or return by the way you came” (1 Ki 13:9). An old prophet lied to this man of God and told him, “I too am a prophet, as you are. And an angel said to me by the word of the LORD: ‘Bring him back with you to your house so that he may eat bread and drink water’” (1 Ki 13:18). The man of God didn’t investigate; he didn’t ask the Lord if he had uttered a different command; he simply went back with the old prophet’s home and ate and drank. After the man of God had eaten with the old prophet, he saddled his donkey and started home; a lion met him on the way and killed him (1 Ki 13:23-25). Had the young prophet bothered to investigate the word of the old man, he would have saved his life. If you investigate Satan’s lies, you will save your soul.

When you hear some new-fangled idea, are you simply going to believe it, or are you going to investigate it? When you see some church trying something new, are you simply going to urge our elders to adopt it, or you going to investigate Scripture first? When you read some devotional book or hear a preacher on TV or listen to a friend at work, will you readily believe what you’re told, or will you search the Scriptures?

I don’t mean to imply that just because we haven’t heard an idea before or haven’t done it that way before that it’s wrong. We’re livestreaming this morning and using PowerPoint, I record a weekly devotional and upload it to YouTube, and we have a prayer tent. Those are new things, things I don’t find specifically mentioned in the New Testament. But when you examine Scripture, you find authority for them. And, that’s so very vital!

In Acts 17, as you know, Paul and Silas were preaching in Berea. Luke commended the Berean Jews, “for they received the message with great eagerness and examined the Scriptures every day to see if what Paul said was true” (Acts 17:11). Those Bereans were hearing new ideas, things they had never heard before, but those new ideas were truth. The Bereans searched the Scriptures and found them to be true.

When you’re confronted with something new, you must emulate the Bereans, lest you believe and follow a lie from Satan himself.

Do you need a new life this morning? Do you need to come and claim that new life while we stand and sing?