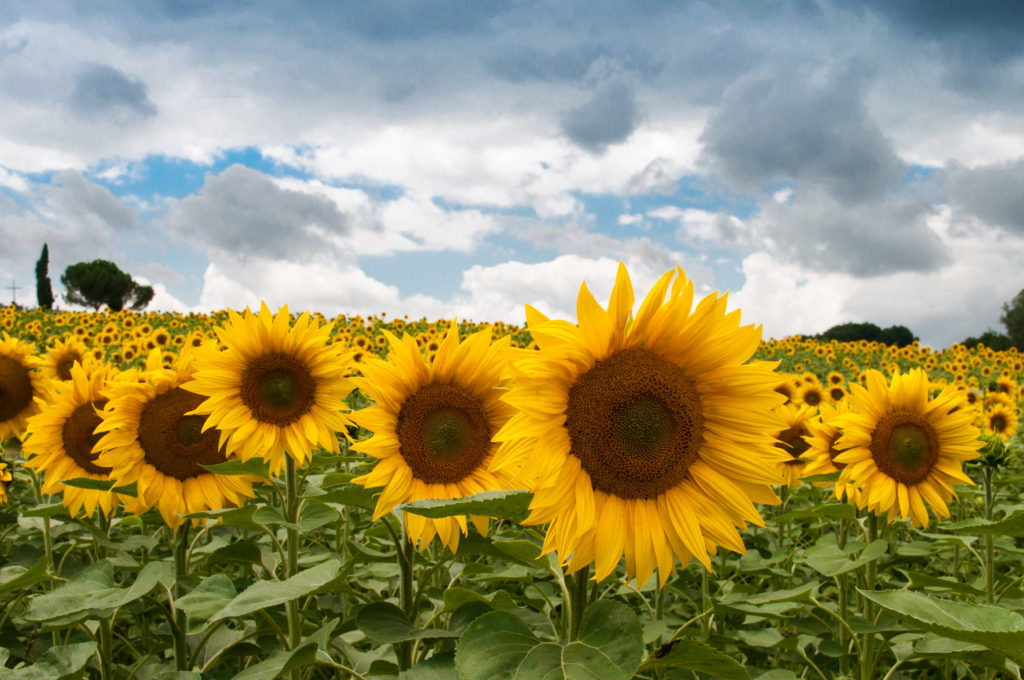 When the bomb went off on a road near Baghdad, Hilbert Caesar thought his life was over. What he discovered was . . . it was just beginning.

According to The Washington Post, Army Staff Sergeant Caesar was in charge of a long-range 155mm howitzer—a self-propelled gun that resembles a tank. He was out on a patrol in Iraq when a roadside bomb exploded. When the smoke cleared, Caesar looked down and saw his right light was severed in three places, flipped backward, just dangling by the skin. He tried to give his machine gun to a fellow soldier, but discovered it was bent. Then he yelled for the howitzer hatches to be closed, and thought to himself, “Oh man. This is it. My life is over.”

But he didn’t die. The insurgents responsible for the attack disappeared, and Caesar was transported to safety. At Walter Reed Hospital, his missing limb was replaced with an artificial leg of plastic and steel.

Still, he felt despair about his future. He was in pain, and he was worried that he’d never be able to run again, or be attractive to women. He received word that eight men from his platoon had been killed by a car bomb in Baghdad, including one of his role models. The news was devastating.

But little by little he began to shift focus Caesar met other inured soldiers and heard them talk about their recoveries. He began to look for the best, and realized that he was fortunate to make it back from battle with just one missing limb. “I’m grateful for that,” he told The Washington Post. “I’m thankful for just being here.”

Caesar now completes marathons in racing wheelchairs, and has found a job with the U.S. Department of Veterans Affairs. He sees the loss of is leg as a minor set back, and believes that he has come out of the war with more wisdom, compassion, and appreciation for life. Hilbert Caesar has experienced “post-traumatic growth.”

A number of psychiatrists and psychologists are beginning to see that not all soldiers come out of the war with shattered spirits. A number are emerging from the experience feeling enhanced. That’s not to say that war is a pleasant experience. But it can lead to personal growth.

The Apostle Paul in this morning’s text describes an experience quite similar to Hilbert Caesar’s. He’s experienced trauma, and he learned that he could come through that trauma better than when he entered it.

Earlier in this chapter, Paul describes a revelation he had of the third heaven. It is my belief that this revelation occurred when Paul was stoned in Lystra. “Some Jews came from Antioch and Iconium and won the crowd over. they stoned Paul and dragged him outside the city, thinking he was dead” (Acts 14:19). Honesty, I think Pal might very well have been dead, seen the great things of the third heaven, and was then raised back to life, for he had much work to do. I think that may be some of the reason for the ambiguity in 1 Corinthians 12—Paul twice mentions that he doesn’t know if the experience was in or out of the body.

Because Paul had received such a great revelation, he could easily have become conceited and think that he held a special position in the church. To prevent that, God gave Paul some trauma. With the trauma, Paul learned some important lessons.

To keep Paul from becoming too conceited, he received a thorn in the flesh.

The Greek word for “thorn” is quite interesting. The term literally refers to a take used for impaling or torturing someone. In the first century, sharpened wooden stakes were often placed in pits, with the hope that enemy soldiers would fall on them and be impaled. These same sharp wooden stakes were used to torture prisoners of war and criminals. These stakes were the roadside bombs of the first century, and Paul uses that word to describe the pain he endures.

Paul describes his stake as “in the flesh.” Various ideas have been proposed to identify this “thorn in the flesh,” since Paul himself fails to tells us specifically what it was—some have suggested it was temptations, others that it was epilepsy, others that it was persecution, and so on. While I think the idea of persecution best fits the available evidence, it doesn’t matter at all—The point is that Paul had pain, and he suffered greatly.

Paul also describes this affliction as “a messenger of Satan, to torment me.” Some people, when in the midst of suffering, will ask, “Why is God doing this to me?” Do notice that Paul doesn’t attribute his suffering to God, but to Satan. Granted, the context makes obvious that God was in control of this suffering and even sent Satan to torment Paul. God sent Satan to torment Paul for two reasons this text makes obvious: to keep Paul from becoming conceited and to cause Paul to depend upon Christ’s power, not his own. Cannot suffering today, whatever form it takes, serve those same purposes—to keep us humble and cause us to rely on God?

So many biblical characters endured great suffering. Adam and Eve endured the loss of a son, with the knowledge that their other son was responsible for his murder. David lost four of his children to death. Job lost everything he had—his wealth, his family, and his health. Until Jesus comes again, we’re going to know pain in this world.

Three times Paul pleased with the Lord to take the thorn away.

Prayer is such a powerful force in this world for God has promised to answer our prayers. “Ask and it will be given to you; seek and you will find; knock and the door will be opened to you. For everyone who asks receives; he who seeks finds; and to him who knocks, the door will be opened” (Matt 7:7-8). “I will do whatever you ask in my name, so that the Son may bring glory to the Father. You may ask me for anything in my name, and I will do it” (Jn 14:13-14).

The first thing we must do when surrounded by trouble is pray! Paul doesn’t say that he had worried himself sick over his thorn in the flesh—he says he had prayed. While there’s nothing wrong with appropriate concern or seeking the help of others, those actions simply cannot replace the need for prayer, for when we pray, we appeal to the great Creator to use his power to help us.

You know, however, that God did not remove the thorn from Paul’s flesh, but God gave a different kind of reply. That is a truth taught throughout Scripture. When Job was in severe torment, he said to God, “I cry out to you, O God, but you do not answer; I stand up, but you merely look at me” (Job 30:20). “This is the confidence we have in approaching God: that if we ask anything according to his will he hears us” (1 Jn 5:14). You recall that Jesus three times asked the Father to remove the cup of the cross from him, but Jesus still went to that old rugged cross.

Imagine what we would be like if God answered every prayer exactly the way we wanted. We would never suffer, but Jesus learned obedience through suffering: “Although he was a son, he learned obedience from what he suffered” (Heb 5:8). We would have everything we could ever want. In short, we would be nothing but a bunch of spoiled brats.

The Lord responded to Paul, “My grace is sufficient for you, for my power is made perfect in weakness.”

We typically think of God’s grace in the sense of the forgiveness he offers we do not deserve. Obviously, that’s not the meaning here. The Greek word for “grace” doesn’t necessarily carry the connotation of “unmerited favor” that the New Testament often gives to the word. The word simply means “kindness” or “favor.” The Greeks used the word similar to the way we use the word “favor.” If I ask you to show me some kindness, I might ask if you can do me a “favor.”

The word seems to have the meaning of kindness or favor here, and Jesus specified what the kind favor is: “My power is made perfect in weakness.”

That’s not at all how Jesus demonstrates his power—he came to serve, rather than be saved; he died a humiliating death to rid the world of Satan’s power.

Paul, in his suffering, would have access to the great and wonderful power of Christ, great power Jesus offers to all who are suffering. Colossians 1:10-12: The power for which Paul prayed the Colossians might have would not remove their obstacles, but it would provide them with endurance and patience. “I can do everything through him who gives me strength” (Phil 4:13)—In context, Paul is saying that he had learned to be content no matter his financial circumstances.

Here’s the message we need to learn from 2 Corinthians 12: God may not remove all the difficulties we endure in this life, but he will provide us the strength we need to get to the other side.

A fellow slid his car off a road and ended up in a ditch. A farmhouse was nearby so the motorist asked the owner of the house if he had a tractor he could borrow to get his truck back on the road. The farmer said, “Nope, but I got my mule, Blue.” “I doubt a mule is strong enough to pull my truck out,” said the motorist. “You don’t know Blue,” said the mule’s proud owner. So, Blue was hitched to the truck.

“Pull, Blue!” The truck didn’t move. And the farmer then called out, “Pull, Elmer!” The truck moved a little. Then the farmer yelled, “Pull, Biscuit,” and the truck was free.

“Thank you so much,” said the truck owner. “But I have a question. You called your mule by three different names. How is that?” “Simple,” said the farmer. “Blue is blind. And if he thought he was the only one pulling, your truck would still be in the ditch!”

The message Paul provides is this: We don’t simply think we have help when we face obstacles in this life, but we have the strength of Christ to help us.

Are you a child of God who can appeal to the power of the Son of God to help you in your problems?