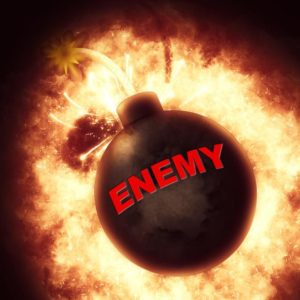 Troubles abound in this life. Diseases can zap our bodies. Loved ones disappoint. Sin constantly begs for our attention.

We must deal with these struggles-Ignoring them doesn’t make them go away.

The Jews faced trouble with Goliath. This giant threatened to destroy their army. We can see how to handle struggles by studying this story.

Goliath, the champion, came forth, and challenged the Israelites. In this age, single-combat was common. Two individuals would represent their armies and fight. The entire war would be determined by that one fight. Goliath was a champion in that he had proved himself in single-combat.

Saul and those with him were terrified. They knew with Goliath’s great size they could not win. The Israelites really had given up hope-they were saying, “We just can’t win against him.”

We can be afraid of our enemies. The Israelites were afraid of the Canaanites (Num. 13:3-14:1). Our fear will accomplish nothing.

We Can Face the Enemy with Confidence, vv 24-40

The Israelites continued to be greatly afraid of Goliath. Although the Israelites had gone forth in battle, they fled from Goliath’s presence. The rumors in the camp was that great things would happen to the man who killed Goliath.

David wants to know what right Goliath has defying God. David inquires concerning what will be done for the man who kills Goliath. David sees Goliath as evil. This giant is a reproach to Israel. He defies the armies of the living God. Since Goliath defies God’s armies, he really defies God. There is here a contrast between the living God of the Israelites and the dead gods of the pagans.

David is brought before Saul. David told Saul not to worry that he would go fight Goliath, yet Saul knows that David cannot defeat Goliath. David can defeat Goliath because of God’s help. As a shepherd, David had killed both lions and bears. Goliath shall become like one of them since he has defied God’s armies. The LORD shall deliver David from the Philistine’s hands.

Saul sends David forth into battle. Saul gives David his blessing. Saul also fits David with his armor, yet because David isn’t used to it David refuses to wear it. David took his staff, five smooth stones, and his sling and went to meet the giant. In the Ancient Near East, slings were often used in war. Although David couldn’t use more sophisticated weapons, he could use what he had.

David and Goliath exchanged taunts. The Philistine disdained David. The Philistine saw that David was a youth–this made him angry, for he wanted to fight. Since David did not come with sword or javelin, the giant ask, “Am I a dog that you come after me with sticks?” Goliath cursed David with the name of his gods. Goliath promises to feed him to the birds and the beasts. Such was common for victors in the Ancient Near East. This shows that Goliath is assuming victory.

David taunted Goliath. Although the Philistine had great military might, David came before him in the name of the LORD. The LORD would strike down the Philistine, his head would be cut off, the Israel would gain victory over the Philistines. Everyone who heard this tale would know that God gives victory. The LORD does not save using conventional military weapons. The LORD will give victory.

When the Philistine came forward, David struck him down with his sling.