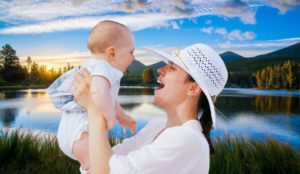 Mothers play an important role in the spiritual development of their children–We need godly mothers who will appropriately raise children.

This morning we want to examine Hannah, a godly mother.

Hannah Knew Motherhood to be a Blessing, vv 1-11

Each year Elkanah would go to Shiloh to make sacrifices. Three times each year all males were required to appear before God for a national festival. Elkanah’s going up does not appear to be one of those occasions. Elkanah apparently went up once a year to make a personal sacrifice. This says something about Elkanah’s piety–this was a man who wanted to do right and wanted to worship God. When Elkanah went up to the tabernacle at Shiloh, his whole family went with him–Elkanah was a man who was leading his family in doing right.

When Elkanah would sacrifice, he would give portions to his family. Elkanah was apparently making “peace offerings” and the portions he gave his family were portions to be consumed by those who worshipped. He gave Peninnah and all her sons and daughters a portion. He gave Hannah a double portion, for he loved her, although she had no children. We are probably to assume that Hannah was his first wife. Elkanah probably married Peninnah just to have children.

Each year Peninnah would provoke Hannah. The idea of “provoke” is “provoke to anger.” Peninnah loved making fun of Hannah because she had no children. Hannah would be hurt and unable to eat.

Elkanah attempted to console her, but was unable.

Hannah arose after they ate and prayed to the Lord.

Hannah knew children were a blessing and she desperately prayed for children. In Hannah’s day, not having children meant that one led a useless life. Hannah wanted the blessing of children.

The Scriptures teach that children are a blessing. “Behold, children are a heritage from the LORD, the fruit of the womb is a reward” (Ps. 127:3). When the author of Chronicles was listing the sons of Obed-Edom, he listed his eight sons and then wrote “for God blessed him” (1 Chr. 26:5). In the Old Testament, “bless” is often contrasted with the word for “esteem lightly;” “to bless” meant to show favor. God showed Obed-Edom favor by giving him eight sons. When John the Baptist was born, Elizabeth’s friends saw that “the Lord had shown great mercy to her” (Lk. 1:58).

Elkanah attempted to console Hannah. Basically he asked Hannah, “You don’t need to have children, I love you just the way you are.” And like many men, he made the situation worse.

Hannah arose, went to the tabernacle and prayed. She prayed and wept in bitterness. In the Old Testament, “bitterness” referred to one’s reaction to a heart crushing experience. Hannah was absolutely brokenhearted that she had no children. Hannah made a vow that if God would give her male children she would give him to the Lord. After Hannah prayed, she ate and her face was no longer sad.

Hannah knew that when life became difficult she could go to God in prayer. “Delight yourself also in the LORD, And He shall give you the desires of your heart” (Ps. 37:4). “Ask, and it will be given to you; seek, and you will find; knock and the door will be opened to you” (Lk. 11:9). “Whatever we ask we receive from Him, because we keep His commandments and do those things that are pleasing in His sight” (1 Jn. 3:22).

Mothers need to be people of prayer. If you’re having trouble with your children, pray. Mothers, do your children know the type of prayer life you have? When life becomes difficult, to whom do you turn?

Hannah Knew to Keep Her Word

Hannah made a vow to God. She would devout her son to God all the days of his life. He would be a Nazarite.

The LORD remembered Hannah and she bore a son. “Samuel” means “Heard by God.” The very name Hannah gave her son symbolized the prayer God answered.

When Hannah had weaned Samuel, she took him to the tabernacle. In the Ancient Near East mothers often nursed their children for three years-about four years passed between the time Hannah made her vow and the time she carried it out. Hannah brought sacrifices and the child to Shiloh. The bull was slaughtered. She gave Samuel over to the Lord.