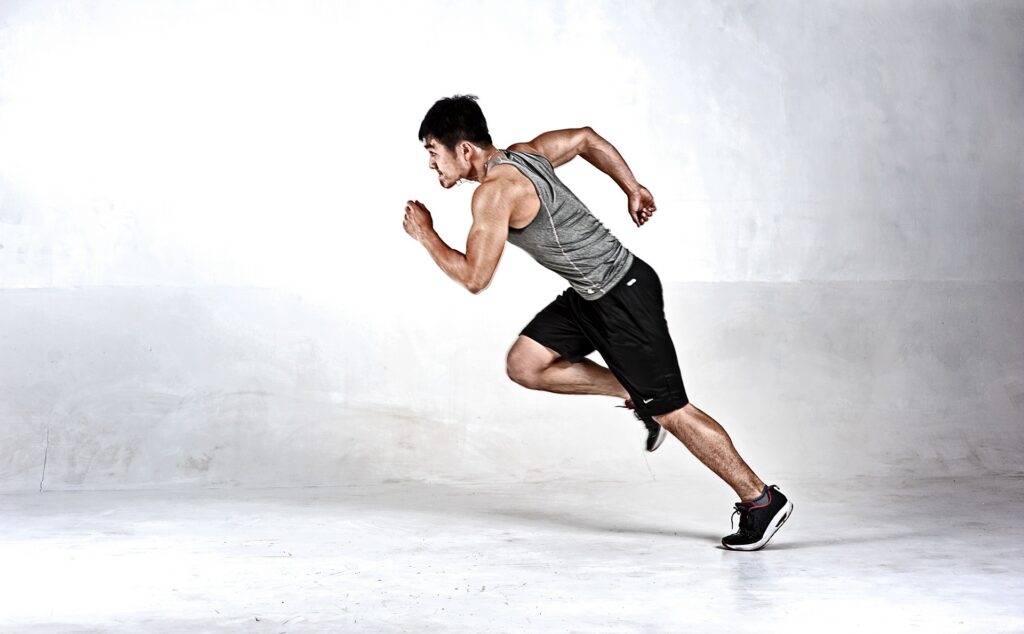 I’ve never been very fast. When I was in elementary school, I’d sign up for every race on field day. Coach Scott, our gym teacher, would give me a huge head start, but I’d come in last place every single time. When our son Wil was working as a lifeguard, he laughed at every mile I swam—he said I looked more like a whale than an Olympian. I ride my bike a half hour every afternoon, but I only get about 5 miles in during that 30 minutes—that is super slow!

I know many of you enjoy exercising. You may run or swim or bike or play tennis or workout some other way. If you do, I pray that the Lord has given you far more speed than he gave me!

I try not to worry too much about my speed—after all, I am getting some good exercise—but Tammy can tell you that after my swim I’ll check my watch, and she can instantly tell by my face if it was a slow day. But there is a time we’d better be as fast as lightning—when we’re confronted with sexual sin.

Some of you might think that we shouldn’t discuss sexual immorality this morning—some might even say that in this congregation, we don’t need to worry about such things. Unfortunately, my experience tells me the opposite; I have known Christians who have fallen into fornication to their ruin. Whenever we think a certain sin will never touch us, I think of 1 Corinthians 10:12: “Let anyone who thinks that he stands take heed lest he fall.” Lest we face serious trouble, we’d better never think we’re above a certain sin!

The first-century world was inundated with sexual immorality. Greek men did not normally marry until around 30, and before marriage, they would often visit prostitutes. In Corinth, adultery was considered immoral, but going to a prostitute was not considered adultery and wasn’t seen as immoral. Prostitutes provided an important service in the eyes of many Greek males, for they could commit fornication with prostitutes before and after marriage without any perceived moral difficulties. That’s likely the reason Paul discussed sex with prostitutes in verses 12-17.

“Flee from sexual immorality.” The Greek is a present active imperative; that means Paul’s instruction is a continual action. The Corinthians were not simply to flee sexual immorality when facing that sin, but they were continually to be fleeing fornication.

Other sins are outside the body, but the one sinning sexually sins against his own body. Fornication uses our bodies in a way unique to other sins. Paul said, “Do you not know that he who unites himself with a prostitute is one with her in body? For it is said, ‘The two will become one flesh’” (1 Cor 6:16). Because of the intimacy achieved through sex, the two participants are joined, and, in the case of fornication, they sin against their bodies.

Our bodies are temples of the Holy Spirit. A temple was primarily a dwelling place for a god; God dwelt in Solomon’s temple in a special way (1 Ki 8:10-11). God, in the Personality of the Holy Spirit, dwells within us—we are his temple.

You are not your own. Because the Holy Spirit dwells within you, you cannot live however you want. “If we live, we live for the Lord; and if we die, we die for the Lord. So, whether we live or die, we belong to the Lord” (Rom 14:8). “Those who belong to Christ Jesus [those who are not their own] have crucified the flesh with its passions and desires” (Gal 5:24).

Do you know why you aren’t your own? You were bought at a price. The image is of being a slave on an auction block, and someone stepping forward to buy you.

Oh, what a price was paid for you! “You know that it was not with perishable things such as silver or gold that you were redeemed from the empty way of life handed down to you from your ancestors, but with the precious blood of Christ, a lamb without blemish or defect” (1 Pet 1:18-19). Jesus went to the cross and suffered to buy you from sin. How can you live in sexual immorality or any other sin?!

Because you have been bought at a price, you must honor God with your body. Your body is to be presented to God to serve him. “I urge you, brothers and sisters, in view of God’s mercy, to offer your bodies as a living sacrifice, holy and pleasing to God” (Rom 12:1).

One: Remember who you are.

You are not your own. You must remember that you belong to God.

Like Joseph and the Corinthians, you must remember that you belong to God. What if you took a post-it note, wrote “I belong to God,” and stuck it on your bathroom mirror? You’d see it several times a day and be reminded of such an important truth—you’d remember to whom you belong.

We sometimes treat sex as though it’s something dirty and unholy. But God created sex; while man and woman were still in the Garden, God told them to “be fruitful and increase in number” (Gen 1:28)—a command that clearly involves sex. Take time to read through the Song of Solomon—reading that very blunt book will convince anyone that God views a proper sexual relationship as holy.

God expects Christians to engage in a holy and blessed sexual union to prevent fornication: “Since sexual immorality is occurring, each man should have sexual relations with his own wife, and each woman with her own husband” (1 Cor 7:2). God wants husbands and wives to give to each other sexually, so they don’t seek sexual fulfillment and pleasure outside marriage.

Make sure that you are giving yourself to your spouse sexually. I have spoken with many frustrated spouses in my ministry—both men and women. In some cases, the frustrated spouse strayed in search of sexual fulfillment. Don’t let that happen in your marriage. Be sexual with your spouse.

Sin begins in the heart. “Out of the heart come evil thoughts—murder, adultery, sexual immorality, theft, false testimony, slander. These are what defile a person” (Matt 15:19-20). The heart is a serious indicator of sexual sin: “I tell you that anyone who looks at a woman lustfully has already committed adultery with her in his heart” (Matt 5:28). The Greek means to look at a woman with the purpose of lusting after her; fornication begins in the heart.

Because sin begins in the heart, we must be careful what we put in our hearts. After teaching about lust, Jesus said, “If your right eye causes you to stumble, gouge it out and throw it away. It is better for you to lose one part of your body than for your whole body to be thrown into hell” (Matt 5:29). Don’t let the hyperbole get in the way of what Jesus was teaching—Be careful what you see (what you put in your heart) and get rid of anything that will lead you to sin.

What are you putting in your heart? What television programs do you watch? What books do you read? What Internet sites do you visit? What sin grows in your heart? Be honest with yourself and cut those things from your life!

It’s always healthy to feed your heart biblical truth. “I have hidden your word in my heart that I might not sin against you” (Ps 119:11). There is the answer to the harmful images which bombard our hearts. Spend time daily putting Scripture in your heart that you might draw closer to God and not sin against him.

Four: Be careful with whom you associate.

We know that our companions can get us in serious trouble: “Bad company corrupts good character” (1 Cor 15:33). Joseph understood that principle; he had no choice but to be around Potiphar’s wife. However, on the day when Potiphar’s wife “caught [Joseph] by his cloak and said, ‘Come to bed with me!,” “he left his cloak in her hand and ran out of the house” (Gen 39:11-12). The patriarch understood Potiphar’s wife could lead him to sin, and he left the situation immediately.

With whom do you associate? Do you go to lunch or dinner with someone who could lead you into fornication? Do you have friends who fill your mind with evil and who could thus lead you into temptation and sin? Are there folks in your life who cause you to skate on dangerously thin ice? Let’s get to the point: Is there someone with whom it’s unwise for you to be alone? Do not let yourself be in that situation! What steps can you take to keep from being in that situation? Take them now!

I told you earlier that I’m a very slow person—I get up at least an hour before I have to go somewhere just so I can get some caffeine in me, get awake, and get ready to go. But we cannot take our time avoiding sexual sin—We must “Flee sexual immorality!”

We also dare not take our sweet time coming to Jesus: “Now is the time of God’s favor, now is the day of salvation” (2 Cor 6:2). Do you need to come to Jesus right now?