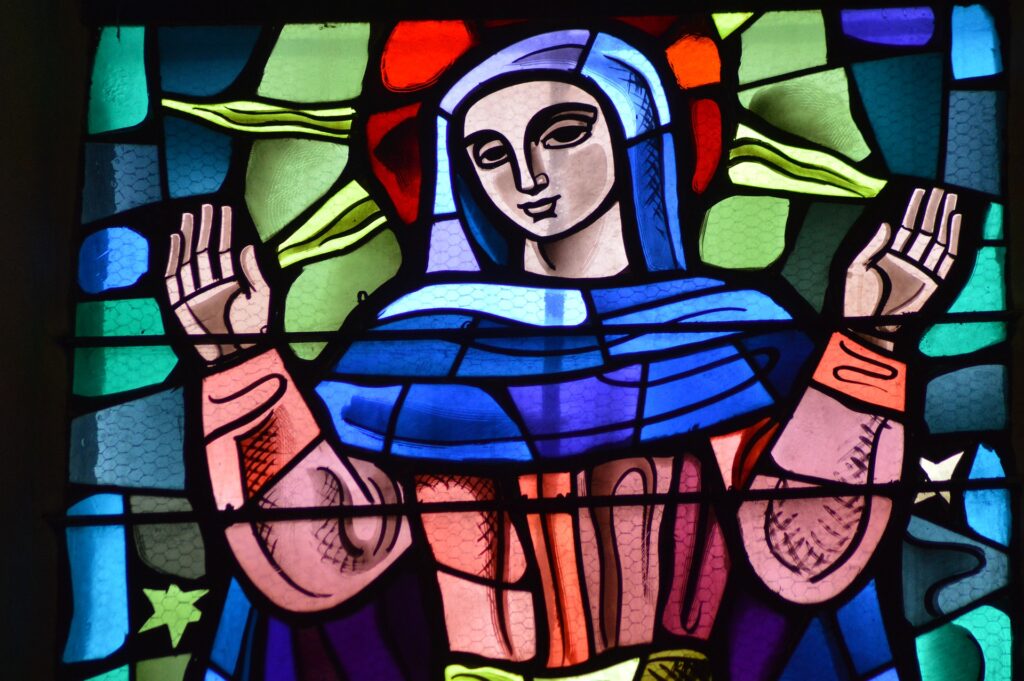 “God made a wonderful mother.
A mother who never grows old;
He made her smile of the sunshine,
And He molded her heart of pure gold.

In her eyes He placed bright, shining stars,
In her cheeks, fair roses you see;
God made a wonderful mother,
And He gave that dear mother to me.”

Mothers have a special place in our society. And rightfully so. No matter what the problem is, Mom has a solution. No matter what the sickness, Mom always has a cure. Mom is by our bedside if we’re sick, she’s at the ballpark when we play ball, and she’s there when we’ve scraped our knees and need some doctoring. Mom is always there.

But no mother is more unique than the one who gave birth as a virgin. Read Luke 1:26-38. This passage tells us that Mary was chosen for a special task. She was chosen to bear the Son of the Most High. Because she was chosen for that task, she was honored. And Mary gave herself to the Lord as his servant.

The Scriptures teach that Mary was chosen by God for a special task; she was to become the mother of the Messiah. Gabriel came to her and informed her of God’s decision. “Greetings, favored one! The Lord is with you” (Lk 1:28). “Do not be afraid, Mary, for you have found favor with God” (Lk 1:30).

She didn’t always understand what was taking place, but she still honored God. Read Luke 2:41-51. Mary went back to Nazareth confused and wondering, but she knew something special was taking place. It had to take a special woman of courage to stand by and watch her Son being crucified, but yet Mary stood by Jesus as he was dying (Jn 19:25-27). Mary devoted herself to prayer with the eleven after the Resurrection (Acts 1:14). God needed Mary for a special task, and she faithfully fulfilled that task.

Like Mary, mothers of today have been chosen for a task. Mothers will love their children. “Can a woman forget her nursing child, or show no compassion for the child of her womb” (Is 49:15). Paul told Titus to have the older women teach the younger women “to love their children” (Tit 2:4). In our society such an admonition sounds strange. Mothers love no matter what. It doesn’t matter how much Kool-Aid is poured out on the new carpet. It doesn’t matter how beautiful the artwork is on the walls, how many things get broken. A mother’s love never dies or grows cold. As I stand and talk with inmates in prison, they almost always mention their mother and her love. Mothers are known by their love.

Loving a child comes naturally to a mother. A mother—with her husband—has a responsibility to teach her children. Deuteronomy 6:7. As the Israelites were preparing to enter the Promised Land, Moses instructed the parents to talk of God’s law continually. We need mothers and fathers who do not just bring their children to church services, but who teach those children at home and away from home.

Timothy has such a mother. “I am reminded of your sincere faith, a faith that lived first in your grandmother Lois and your mother Eunice and now, I am sure, lives in you” (2 Tim 1:5). “From childhood you have known the sacred writings that are able to instruct you for salvation through faith in Christ Jesus” (2 Tim 3:15).

There is no more important responsibility than for a mother to be sure that she teaches her children the ways of God. This instruction doesn’t just have to happen when the child is at home, but a son or daughter can always see the example that his or her mother sets.

Elizabeth praised Mary. “Blessed are you among women, and blessed is the fruit of your womb. And why has this happened to me, that the mother of my Lord comes to me? And blessed is she who believed that there would be a fulfillment of what was spoken to her by the Lord.”

But all mothers and all women are blessed. God had something special in mind when he created motherhood. “Sons are indeed a heritage from the LORD, the fruit of the womb a reward” (Ps 127:3). Here, Solomon calls motherhood a blessing. And mothers, feel that way! God has chosen you to raise children. And that is a great privilege.

Ephesians 6:2-3. Such a philosophy seems so foreign to today’s society. The blessedness of the home is no longer honored. As a whole, our society no longer believes in honoring parents, but God still calls children to honor their parents.

Mary Offered Herself to the Will of God

After the angel Gabriel came to Mary, she replied, “Here am I, the servant of the Lord; let it be with me according to your word” (Lk 1:38).

Mary probably did not understand all those words meant. When Mary and Joseph brought Jesus into the temple, Simeon came, took the child, and praised God. Scripture says, “The child’s father and mother were amazed at what was being said about him (Lk 2:33). Simeon then blessed Mary and Joseph and said to Mary, “This child is destined for the falling and the rising of many in Israel, and to be a sign that will be opposed so that the inner thoughts of many will be revealed—and a sword will pierce your own soul too” (Lk 2:34-35).

A sword did pierce the heart of Mary. At one time Jesus’s family went out to restrain him, because the people were saying that he was out of his mind (Mk 3:21). Then later, Mary stood by the cross as her eldest son was crucified. At that time, surely a sword pierced Mary’s very soul.

There is so much work that can be done by women. Priscilla played an important role in the early church. It was she and her husband who taught Apollos the way of the Lord more accurately (Acts 18:26). She and her husband with Paul worked for the cause of Christ (Rom 16:3).

Romans 16 mentions women who offered themselves to God as his servants. Phoebe was called a servant of the church at Cenchreae and a benefactor of many (Rom 16:1). Paul mentioned Mary who worked hard among the Romans (Rom 16:6).

The important thing is to find your area of service and fill that area. Paul told Titus, “Tell the older women to be reverent in behavior, not to be slanderers or slaves to drink; they are to teach what is good” (Tit 2:3). The younger women are to “love their husbands, to love their children, to be self-controlled, chaste, good manager of the household, kind, being submissive to their husbands, so that the word of God may not be discredited” (Tit 2:4-5).

Sisters, that is just part of your service. You women can teach children far better than most men. You can grade correspondence courses. You can make sure the church building stays looking nice. There is so much you can do.

Mary was a special mother. She had a special task to perform. She was chosen to raise the Messiah.

Mothers, all of you are special. God has chosen you for a noble task, the task of raising children. Honor God and honor your children by being obedient to God’s commands.

Ladies, are you honoring God? Are you fulfilling the role which God has given you? What heritage will you leave your children? If you need to respond to the invitation, we give you this opportunity while we stand and sing.

This sermon was originally preached by Dr. Justin Imel, Sr., at the Menifee Church of Christ in Frenchburg, Kentucky.