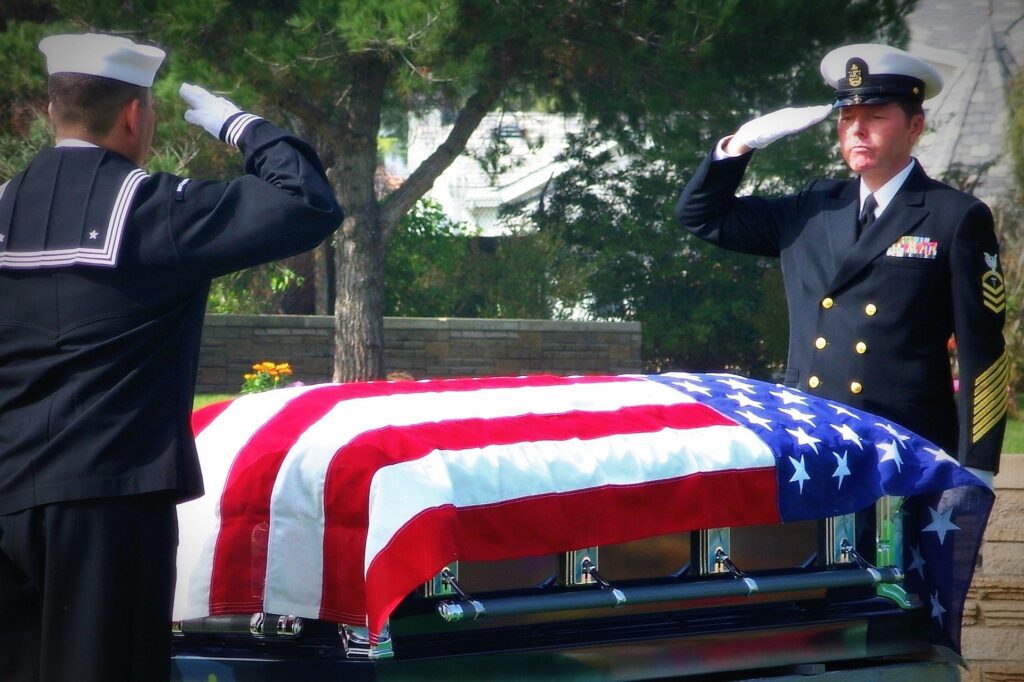 On November 30, 2018, Tammy woke me up when she came to bed to tell me that President George H. W. Bush had just died. Tammy knew that the 41st President of the United States held a special place in my heart and that I would want to know the news.

The following week, I traveled to Washington and filed past President Bush’s casket as he lay in state at the U.S. Capitol. Before I entered the Capitol, I videoed the funeral procession passing in front of me. Once the procession arrived on Capitol Hill, I heard the 21-gun salute and the playing of “Hail to the Chief.”

I entered the rotunda and there before me was the flag-draped coffin of an American president. The casket lay upon the Lincoln catafalque which was hurriedly constructed to hold President Lincoln’s casket. Around the President’s casket were wreaths presented by the Vice President and Congressional leaders. As I was preparing to leave the rotunda, I witnessed the changing of the guard keeping vigil at the casket.

This weekend is Memorial Day, and many families will be thinking of dead bodies, cemeteries, and flowers on a grave. This morning, we’re going back in time to the funeral of Jesus Christ and watch as Joseph of Arimathea buries him.

As Joseph placed Jesus in his own tomb, Joseph provided an example for us. He demonstrated: “You need courage to follow Jesus.” Joseph didn’t always have courage: “After these things Joseph of Arimathea, who was a disciple of Jesus, but secretly for fear of the Jews, asked Pilate that he might take away the body of Jesus” (Jn 19:38). However, his courage grew because Joseph knew: “You need courage to follow Jesus.”

After Jesus’s death, a rich man from Arimathea, named Joseph, came forward. In the Greek text, the word “rich” is in the emphatic position in this sentence. Apparently, Matthew wished to emphasize Isaiah 53:9: “And they made his grave with the wicked and with a rich man in his death.” Joseph’s fulfilling prophecy shows that Jesus is the Christ.

It’s also important Joseph was rich, because he would have had the means to own a tomb where he could bury Jesus.

Joseph is mentioned as a disciple of Jesus. Joseph wasn’t just interested in Jesus’s message. Rather, he had accepted that message and responded to it.

Joseph went to Pilate and asked for the body of Jesus. Joseph’s actions required much courage. Crucified criminals were normally buried in mass graves. However, family members could ask the authorities for the body. More often than not, the Romans handed over the body when a family asked.

However, the Romans expected those executed for treason—e.g., claiming to be a king—to be left for the birds and dogs. Furthermore, unless one was acting at the behest of the Sanhedrin in asking for the body, he could be associated with Jesus’s treason; he could, therefore, be executed for treason himself. Officials often liked to pin such accusations on wealthy people so they could confiscate their property.

Thus, Joseph was taking a huge risk in going to Pilate. If it went badly, Joseph could have been crucified. At the very least, his wealth could have been taken from him. Joseph is a profile in courage and demonstrated: “You need courage to follow Jesus.”

Once Joseph asked, Pilate ordered Jesus’s body be given to him.

Joseph paid Jesus great homage. Wrapping someone in a shroud indicated an honorable burial. Burying someone in one’s own family tomb was a special act of reverence and affection.

Joseph rolled a stone in front of Jesus’s tomb and left.

“You need courage to follow Jesus.” Joseph demonstrated great courage in asking for Jesus’s body. He could have been crucified. If he didn’t die, he could have had his property confiscated.

We don’t know what happened to Joseph after he buried Jesus. For all we know, Joseph faced serious consequences for his actions. It’s difficult for me to image Joseph’s keeping his position on the Sanhedrin. Whatever consequences, Joseph did or did not face, he acted courageously in burying Jesus. Mark specifically mentioned Joseph’s courage: “Joseph of Arimathea, a respected member of the council, who was also himself looking for the kingdom of God, took courage and went to Pilate and asked for the body of Jesus” (Mk 15:43).

So many folks accepted their need for courage in following Jesus. Levi was collecting taxes when Jesus called him: “And leaving everything, he rose and followed him” (Lk 5:27-28). Peter, Andrew, James, and John were making their living as fishermen when the Lord called them; they left everything to follow the Lord (Matt 4:18-22). From prison, Paul wrote, “I am already being poured out as a drink offering, and the time of my departure has come” (2 Tim 4:6).

Think about that for a moment. Levi, Peter, Andrew, James, and John left their careers to follow Jesus. Can you imagine the courage required to walk away from earning your living? Paul knew that his allegiance to Jesus had cost him his life and that his time was up. Instead of bemoaning his approaching demise, he embraced it with expectation. What courage!

You need to pray and ask God to grant you courage.

Peter and John were called before the Sanhedrin and ordered to stop preaching in the name of Jesus. When Peter and John left the council, they reported to the church what they had been told. The assembled saints prayed to God and said, “And now, Lord, look upon their threats and grant to your servants to continue to speak your word with all boldness” (Acts 4:29). The Lord’s apostles understood they needed courage to continue fulfilling their role, and they knew God could give them such courage. God answered their prayer in a mighty fashion: Acts 4:31.

Paul asked the Ephesians to pray that he might have courage: Ephesians 6:18b-20.

Those we remember for their courage acted. David didn’t merely say God could deliver him from Goliath; he picked up some stones, took his slingshot, and met the giant on the battlefield. Daniel didn’t talk about courage; he got down on his knees and prayed, fully aware the next stop was the den of lions. Shadrach, Meshach, and Abednego didn’t claim to have courage; they refused to bow down to Nebuchadnezzar’s image while the furnace blazed with great heat. Levi, Peter, Andrew, James, and John didn’t tell Jesus they had courage; they left lucrative careers and followed Jesus. Paul didn’t merely say he had courage; he gave his life for the cause of Christ.

You need to act on your courage to follow Jesus. Many have been paralyzed with fear and never acted. The man with one talent told his master he buried his talent because he was afraid (Matt 25:24-25). “Many even of the authorities believed in him, but for fear of the Pharisees they did not confess it, so they would not be put out of the synagogue” (Jn 12:42). In Antioch, Peter freely ate with the Gentiles; however, when some men from James came, “he draw back and separated himself, fearing the circumcision party” (Gal 2:12).

Be a Joseph and act in courage. The truth of the matter is that unless you act in courage you cannot be saved. “As for the cowardly . . . their portion will be in the lake that burns with fire and sulfur, which is the second death” (Rev 21:8). Do you need to act in courage this morning and come to Jesus right now as we stand and sing?