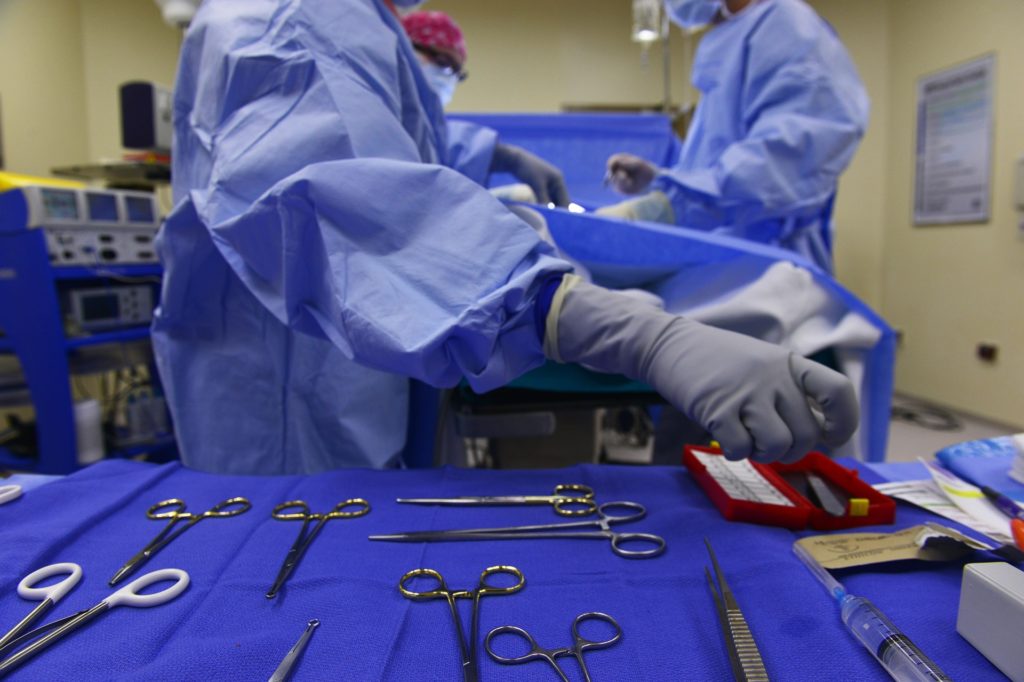 Surgery occasionally needs to be performed. At times, some medical device needs to be implanted—a pacemaker, an insulin pump, a heart valve. At times, healthy organs are transplanted in the place of diseased ones—hearts, lungs, livers. At times, disease needs to be removed from the body—tumors, infection.

When we have surgery, we want the most skillful, experienced surgeon performing the operation.

Jesus calls upon us to be spiritual surgeons. He does not call upon us to perform surgery on others but on ourselves.

There have been times that a doctor has had to perform surgery on him or herself. Take Dr. Jerri Nielsen, for example. Dr. Nielsen was the sole doctor for the polar observation team in Antarctica. During the winter, when no planes could land to rescue her, she noticed a lump on her breast. She contacted a surgeon in the States who instructed her how to do a breast biopsy. She did the biopsy herself, made slides of the sample tissues, and sent the pictures via email back to the States.

Dr. Nielsen was rescued when a plane could land at the South Pole, and she survived her ordeal. Had she not taken the drastic steps of doing her own biopsy and administering her own chemotherapy, she likely would have died.

“You have heard that it was said to those of old, ‘You shall not commit adultery.’ But I say to you that whoever looks at a woman to lust for her has already committed adultery with her in his heart” (Matt 5:27-28).

The Old Law taught that one could not commit adultery. Exodus 20:14: “You shall not commit adultery.” Many believed that as long as you did not have sexual intercourse with someone other than your spouse, you could do whatever you wanted. The heart did not matter; all that mattered were the outward actions. Josephus, the Jewish historian, wrote, “The purposing to do a thing, without actually doing it, is not worthy of punishment.”

But Jesus said that lusting was wrong. He did not say that seeing an attractive member of the opposite sex was wrong. He said that looking at that person with the intent to lust was sinful.

Lust is sinful. “Walk in the Spirit, and you shall not fulfill the lust of the flesh” (Gal 5:16). “Put to death your members which are on the earth: fornication, uncleanness, passion, evil desire” (Col 3:5). “Flee also youthful lusts; but pursue righteousness, faith, love, peace with those who call on the Lord out of a pure heart” (2 Tim 2:22).

We need to look upon no one with the intent to lust. “I have made a covenant with my eyes; Why then should I look upon a young woman?” (Job 31:1). “Do not rebuke an older man, but exhort him as a father, younger men as brothers, older women as mothers, younger women as sisters, with all purity” (1 Tim 5:1-2). When we lust, we degrade the person after whom we lust—we make him or her a sex-object rather than a person made in the image of God.

Jesus here teaches us that sin begins in the heart. Before he destroyed the world with water, “the LORD saw that the wickedness of man was great in the earth, and that every intent of the thoughts of his heart was only evil continually” (Gen 6:5). Mark 15:17-20.

Because sin begins in the heart, we need to guard our hearts. We cannot engage in lust, or we could very well get caught up in not only lust but other inappropriate activity.

If our right eye or our right hand causes us to sin, we are to cast them from us.

The right eye, right hand, and right foot were regarded as the most precious (Ex 29:20). Jesus said that we might be forced to give up the best in life. There may be things in our life we need to give up in order to be rid of lust. Perhaps we purchase magazines with scantily clad people, and it doesn’t have to be pornography to incite lust. Perhaps we watch TV programs which feature sexual content. Perhaps we drive by a certain section of town in the summer, because we know people will not be wearing much clothing.

There is a broader principle here than just dealing with lust—we need to give up anything in our lives that tempts us to sin. Jesus said, “Whoever of you does not forsake all that he has cannot be My disciple” (Lk 14:33). Paul wrote, “Indeed I also count all things loss for the excellent of the knowledge of Christ Jesus my Lord, for whom I have suffered the loss of all things, and count them as rubbish, and I may gain Christ” (Phil 3:8). What about you? Have you given up the pleasure that was prohibiting you from serving Jesus?

Jesus tells us why we must perform this spiritual surgery: “It is more profitable for you that one of your members perish, than for your whole body to be cast into hell.”

Hell is such a horrible place that we should give up the pleasures of the flesh rather than go there.

There will be absolutely no light in hell. We hate to be in absolute darkness; we turn on the lights, have headlights on our cars, take lanterns with us when we go camping so that we will not be in darkness.

Hell is a place of fire.

Matthew 13:40-42. No wonder there is weeping and gnashing of teeth—fire causes great pain, and those in hell will be in fire.

Hell is an eternal place.

Matthew 25:41. One does not go to hell to see if he likes it; those there will spend eternity in hell.

Are there pleasures you need to give up to avoid hell? Do you need to perform spiritual surgery this very morning?