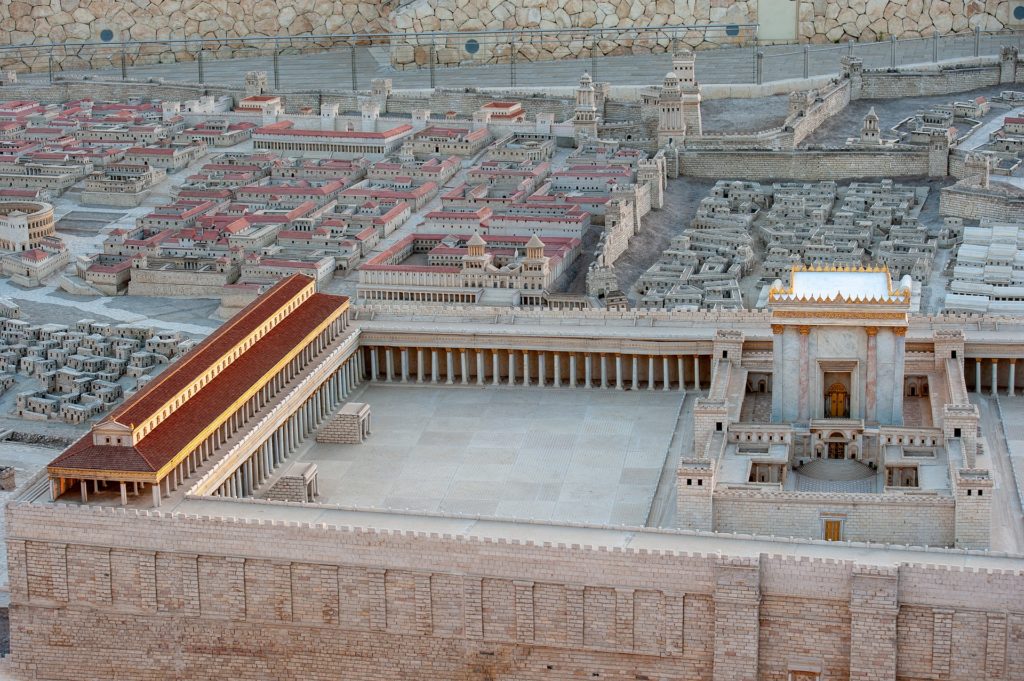 In Don Richardson’s best-selling book, Peace Child, he tells of going, accompanied by his wife Carol and seventeen-month-old child, to the Sawi, a headhunting tribe in Netherlands’ New Guinea. There savagery was a way of life. The tribesmen considered headhunting, cannibalism, and treachery as virtues. As these savages heard the story of the Gospel, they considered Judas—not Jesus—the hero, and Don almost despaired of reaching them.

At last, the warfare and barbarism between the Sawi and their neighbor tribes grew so intense that the Richardsons decided to pack their bags and leave. But when the Sawi heard of it, they were deeply distressed. They had come to love and trust the Ricahrdsons. To prevent their leaving, the Sawi met in a special session and decided to make peace.

The next day as Don watched with mounting curiosity, the peace ritual began. Young children from the warring villages were to be exchanged, and as long as any of those children were alive, the peace would continue.

It was an anguishing ritual, for every mother feared her child would be taken. But after a period of emotional indecision, the chief himself grabbed his only son and rushed toward the enemy tribe, literally giving the tribe to his enemies. In return, he received a son from the other side. Peace descended across the mountains.

As Don pondered the significance of the ceremony, he realized there was a powerful redemptive analogy. Shortly afterward, gathering the elders together, he told them how God the Heavenly Father sent Jesus to earth as His Peace Child to make peace between God and man. It was a lesson they understood and embraced at last.

In tonight’s lesson, we want to remember Jesus’ death and the new era it brought forth.

In this evening’s text, we have two evidences of a new era: the veil in the temple is rent asunder and many dead people come back to life. Among the Jews, to whom Matthew seems to be writing, stories often circulated about catastrophic events occurring at the death of pious rabbis, especially those rabbis whose work was considered vital to the world.

I think that tells us why Matthew recorded the rending of the veil and the resurrection of these dead saints. In telling of these events, Matthew basically says, “You Jews have all the legends about what happens when a good rabbi dies. Not a single one of those rabbis caused the veil in the Temple to tear, nor did a single one of those rabbis cause the dead to rise.” This Jesus is different. He’s not just a good rabbi: he’s the Son of God, the Redeemer of mankind.

Verse 50 tells us that Jesus died: “Jesus cried out again with a loud voice, and yielded up His spirit.”

We then read: “Then, behold, the veil of the temple was torn in two from top to bottom; and the earth quaked, and the rocks were split.” Matthew’s recoding of the rending of the temple’s veil may be intended to remind us of the high priest who tore his clothing when he heard what he considered blasphemy (Matt26:64-66).

Notice that the temple’s veil was torn from the top to the bottom—no way could this be either coincidence or the work of man—curtains just do not split from top to bottom unless something else is going on.

This separated the Holy of Holies from the Holy Place. “You shall hang the veil from the clasps. Then you shall bring the ark of the Testimony in there, behind the veil. The veil shall be a divider for you between the holy place and the Most Holy” (Ex 26:33). Only the high priest could go behind that curtain, and he could only do so once a year when he went in on the Day of Atonement, when he went to make atonement for people’s sins.

What’s the significance of the temple’s veil being torn? I think there’s much symbolism that could be intended here. I wonder if we’re not to see the whole picture here rather than try to pick one piece of symbolism and say, “Here’s what it means.” In other words, I think the tearing of the temple’s curtain symbolizes three New Testament truths.

Let’s start with the symbolism to which I’ve already alluded: The veil’s tearing could symbolize that no more will the high priest enter behind that curtain to atone for people’s sins.

On the Day of Atonement, the high priest was to enter the Holy of Holies twice: once to make atonement for his own sins and then to make atonement for the sins of the people (Lev 16:11-17). Yet, with the death of Jesus that practice is no longer valid. Jesus made atonement for the people’s sins. “Much more then, having now been justified by His blood, we shall be saved from wrath through Him” (Rom 5:9). “How much more shall the blood of Christ, who through the eternal Spirit offered Himself without spot to God, cleanse your conscience from dead works to serve the living God?” (Heb 9:14).

Nikolai Berdyaev, who abandoned Marx for Christ, insists that neither history nor theology nor the church brought him to the Christian faith, but a simple Christian named Maria. Nikolai was present at a concentration camp when the Nazis were murdering Jews in gas chambers. One distraught mother refused to part with her baby. When Maria saw the officer was only interested in numbers, without a word, she pushed the mother aside and quickly took her place. This action revealed to Nikolai the heart of Christianity.

Isn’t that the great heart of Christianity? We were condemned to death, but Jesus stepped forward and gave His blood to atone, to pay the penalty for those sins!

The veil’s tearing may also symbolize God’s departing from the temple.

God dwelt in the temple in a very special way. “The priests could not continue ministering because of the cloud; for the glory of the LORD filled the house of the LORD” (1 Ki 8:11). The temple was the place at which God physically dwelt with the Israelites. No more does God dwell in temples made with hands: “God, who made the world and everything in it, since He is Lord of heaven and earth, does not dwell in temples made with hands” (Acts 17:24).

The veil’s tearing may also symbolize that we can approach God for ourselves, without the intervention of a human priest.

Only the high priest could enter God’s presence under the temple system, and he could only do so once a year.

However, through Christ, we are able to approach God without a human mediator. Christ Himself serves as our mediator: “There is one God and one Mediator between God and men, the Man Christ Jesus” (1 Tim 2:5). Through Christ, we can approach God’s throne for ourselves when the need arises: “Let us therefore come boldly to the throne of grace, that we may obtain mercy and find grace to help in time of need” (Heb 4:16).

There is nothing wrong with asking our brethren for prayer—In numerous places Scripture exhorts us to pray for one another. When I face calamity in my life, I don’t have to call the elders or the preacher or a Bible class teacher before I go to God’s throne. I can do so—it’s part of the privilege I have as part of this family—but I don’t have to do it—I can go to God on my own.

We live in a new era: an era where the Son of God, not the son of a bull, atones for our sins; an era where God doesn’t dwell in a temple made with hands; and an era where we are all priests of God and can approach God on our own.

The tombs opened and many dead saints came from their tombs.

I find it interesting that Jesus didn’t raise these saints as he raised Lazarus and the others, but they were raised when He died. I think that’s significant. Sins had not been fully forgiven until Jesus died. God, of course, overlooked the sins of the faithful in the Old Testament until Jesus could come. But it was Jesus’ death that finally removed all those sins—Thus, when those sins are removed far, far away, the righteous dead come to life.

After Jesus’ resurrection, these raised saints went into Jerusalem and appeared to many people.

I really, really would like to know what these raised saints did while Jesus was in His tomb. The text says that they were raised when Jesus died, but they didn’t go into Jerusalem until after the Resurrection. What did they do for those 36 hours or so that Jesus was in His tomb? Did they have needs that normal human beings have—e.g., food and shelter—or in their resurrected state did they have no need of such?

Those are questions I would really like answered, but that’s not important—what’s important is that after Jesus was raised they went into Jerusalem and appeared to many. Again, look at this passage through wondering eyes. What must the people in Jerusalem have thought when these formerly dead people started showing up? Is that Uncle Joe—sure looks like him, but it can’t be—he’s been dead 30 years! I think I went to his funeral—Can’t be!

What must those formerly dead people have said to the people of Jerusalem? I was talking with Abraham a couple days ago, and here I am talking with you. You simply will not believe what God has prepared for His people—You just wait.

What impression must those raised saints have made on the people of Jerusalem? What irrefutable evidence that Jesus really is the Son of God! We’re not talking about just Jesus’ being raised from the dead, but we’re talking about a whole bunch of people being raised. I really wonder if that’s not why the leaders in Jerusalem had such a hard time refuting the evidence of Jesus. They didn’t just need to explain away a man who was publicly crucified and publicly raised, but they had to explain away a whole bunch of people being raised!

Philip, born with Down’s Syndrome, attended a third-grade Sunday school class with several eight-year old boys and girls. Typical of that age, the children did not readily accept Philip with his differences. But because of a creative teacher, they began to care about Philip and accept him as part of the group, but not fully.

One Sunday, the teacher brought little boxes for all the students. After the teacher had given each student a box, she asked them to go outside and find some symbol for new life and put it in the box. After the students had run about on the church property in wild confusion, the students returned to the classroom and placed the containers on the table. Surrounded by the children, the teacher began to open them one by one. After each one, whether a flower, butterfly, or leaf, the class would ooh and ahh.

Then one was opened, revealing nothing inside. The children exclaimed, “That’s stupid. . . . That’s not fair. . . . Somebody didn’t do his assignment.” Philip spoke up, “That’s mine.” “Philip, you don’t ever do things right! That’s nothing there,” one student exclaimed. “I did so do it,” Philip insisted. “I did do it. It’s empty. The tomb was empty!”

Silence followed. From then on Philip became a full member of the class. He died not long afterward from an infection most other children would have shrugged off. At the funeral, this class of eight-year-olds marched up to the casket, not with flowers, but with their Sunday school teacher, each to lay on it an empty box.