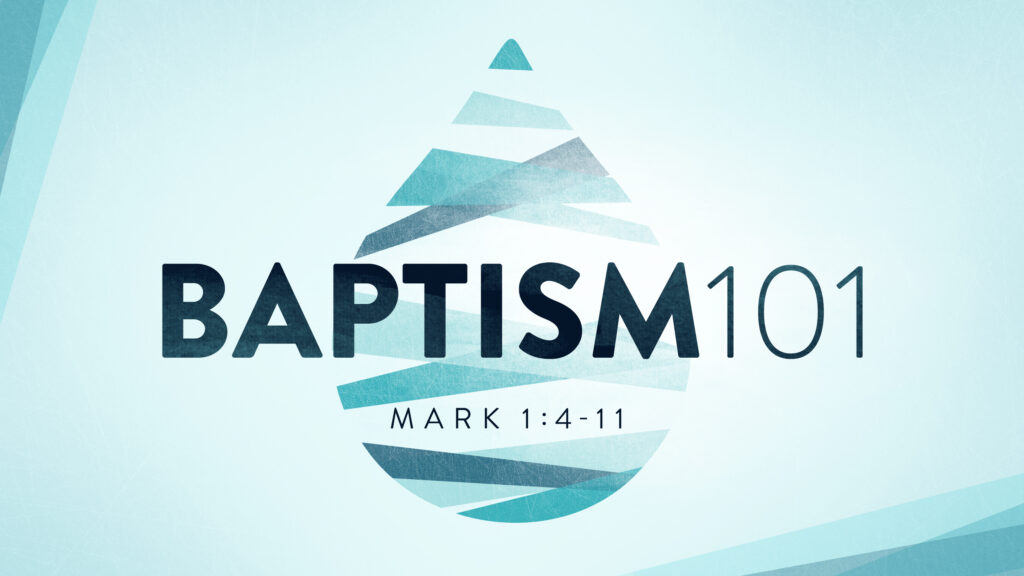 Some folks in this morning’s passage made some drastic changes when they were baptized. As John was baptizing, he taught about Jesus and prepared the way for his ministry; John called on people to make big changes in their lives.

John appeared in the wilderness. The Greek indicates John just popped on the scene one day; in this way, Mark demonstrated John’s appearing was the fulfillment of the prophecy he quoted in verses 2-3. God had a plan in saving man, John played a significant role in that plan, and God was fulfilling his plan by having John show up preaching in the wilderness.

You recall that the Israelites left the wilderness by crossing the Jordan to go to the Promised Land (Josh 1:11). There is likely symbolism in the wilderness and Jordan here; the people left the bondage of sin and entered a new life of freedom.

John preached a baptism of repentance for the forgiveness of sins. John’s preaching had to be a shock for the Jews. They believed as long as they were descended from Abraham, circumcised, and did not reject the law, they were going to heaven—no questions asked. John’s baptism would have been insulting to most Jews. Yes, they had many ceremonial washings, but the only true baptism was for Gentiles who become proselytes. Their baptism indicated a change in life. John preached that being a Jew wasn’t enough—they needed to turn from sin and be baptized to indicate a new life.

As these Jews were baptized, they claimed a new life. They began a life of repenting of their sins instead of living in sin, and they began a life where they were no longer bearing the guilt of sin.

The whole Judean countryside and all the people of Jerusalem went out to John. Yes, there is surely hyperbole, but don’t lose sight of the fact that people and people and people were streaming from their homes to be baptized by John. Going out to John demonstrated a commitment, for the people had to travel to him. They put forth effort to change their lives.

John’s clothing was like the clothing Elijah wore (2 Ki 1:8); this again shows that John fulfilled the prophecy of Elijah’s coming before the Messiah’s appearance. John wore camel hair clothing—sackcloth—and showed John’s mourning over the people’s sins.

The parallels between John and Elijah shows God planned all of this—God is fulfilling prophecy, preaching about a new life, and preparing the people for the Messiah’s coming.

John understood his message was about Jesus and his life-changing message. Since John was there to proclaim a baptism that would change lives, he pointed people to Jesus, not himself.

You need to be baptized into Christ.

Some of you have not obeyed the Lord Jesus in baptism. Understand that immersion into Jesus will change your life:

If you have not yet been baptized into Jesus for the forgiveness of your sins to change your life, let me urge you to do that today. If the elders or I can help you in any way, please let us know.

You all need to remember what life was like before your baptism.

Spend serious time thinking about what your life looked like before you were baptized. Memory is a powerful tool for good; Jesus told the Ephesian church: “Remember . . . from where you have fallen; repent, and do the works you did at first” (Rev 2:5, ESV). What if we used that same principle, and turned it on its head? “Remember from where you have risen through baptism; do not go back there.”

You all need to think about what changes you still need to make.

Even those who have been baptized into Christ sin. Peter, an apostle, sinned: Galatians 2:11-13. Simon the sorcerer was baptized into Christ, changed his life, and fell back into sin. The Galatian Christians had fallen from grace (Gal 5:4). Because falling from grace and back into sin is such a real possibility, Paul told the Corinthians, “If you think you are standing firm, be careful that you don’t fall!” (1 Cor 10:12). Since you can fall back into sin after changing your life, you need to be ever so careful.

You need to be growing as a Christian. “Let us leave the elementary teachings about Christ and go on to maturity” (Heb 6:1). “Grow in the grace and knowledge of our Lord and Savior Jesus Christ” (2 Pet 3:18).

You are surrounded by brothers and sisters more than willing to help you continue your change after baptism: “Carry each other’s burdens, and in this way you will fulfill the law of Christ” (Gal 6:2). What burden do you need help carrying this morning? Who can help you make necessary changes in your life? How can we help you this morning as we stand and sing?