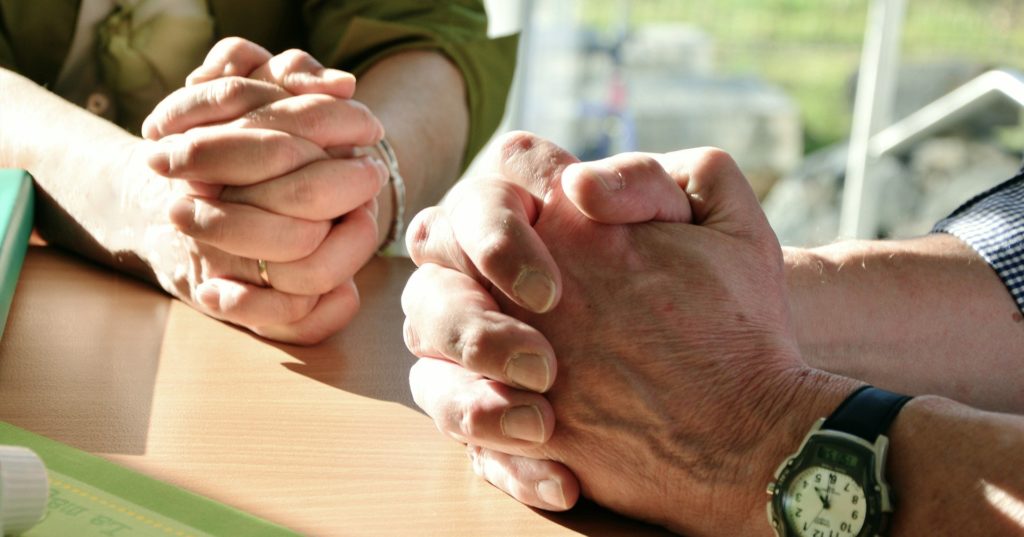 In a very real sense, this nation was founded upon prayer. This nation still turns to God in prayer. The House and Senate begin their daily proceedings with prayer. The President holds a yearly prayer breakfast where he and member of Congress come together to pray. When Gerald Ford assumed the presidency under difficult circumstances, he asked for the nation’s prayers.

James tells us about founding our lives on prayer. James is an immensely practical book—he doesn’t spend time discussing theological matters; he spends time telling us, in practical terms, how to live as Christians. It’s not at all surprising, therefore, that James concludes his book with instruction on prayer. Prayer is deeply practical—while there is much we do need to know about prayer, and I’ve preached those truths in the past, we need to pray practically.

Let’s examine James’ instructions on prayer so that we can be people of prayer.

Here James answers the question, “When should we pray?” James answers, “In time of trouble.” Many of those to whom James wrote were suffering at the hands of oppressors, suffering persecution from those who opposed Christianity. A quick reading of James shows that those early Christian were truly suffering.

It may have been that James’ readers were saying, “We’re facing many hardships. What should we do?” James answers, “Pray.”

We can do one of two things when we are faced with affliction:

Are you praying in time of trouble?

Those who are sick are to call for the elders of the church and allow them to pray over them; the prayer of faith will save the sick. There are many who claim that this is a miraculous healing, but that just can’t be. Not every elder in the first century would have had the miraculous measure of the Spirit. The power of prayer is being discussed here, not the power the Spirit gave people in the first century.

Obviously not everyone for whom we pray recovers from his illness. I prayed for my grandfather’s cancer for years, but he still died. Even in biblical times, prayers were not always answered the way those who prayed the prayer wanted. Jesus prayed that his Father would not send him to the cross, yet Jesus still died. Paul pleaded with the Lord three times that his “thorn in the flesh” might be removed, yet it wasn’t (2 Cor 12:8-9).

Everyone cannot recover from illness: “It is appointed for men to die once” (Heb 9:27); men are gong to die.

Whenever we pray, we must pray that God’s will will be done. When Jesus prayed in the Garden, he prayed, “Not as I will, but as You will” (Matt 26:39). Speaking of the brevity of life, James says that we ought to say, “If the Lord wills, we shall live and do this or that” (Js 4:15).

Are we praying for those who are ick? Are you praying that God’s will be done?

Prayer will restore the sinners.

If the sick have committed sin, they will be forgiven. Wea re to confess our trespasses to one another, and pray for one another that we may be healed. When we commit sins, we are to pray to God for forgiveness. When Simon the sorcerer sinned, Peter told him, “Repent therefore of this your wickedness, and pray God if perhaps the thought of your heart may be forgiven you” (Act 8:22). “If we confess our sins, He is faithful and just to forgive us our sins and to cleanse us from all unrighteousness” (1 Jn 1:9). The confession here is to God that takes place in prayer.

Some people want to use this text to speak of forgiveness for the alien sinner, the one who has never been a Christian. They say that all a sinner needs to do to be forgiven is to pray for forgiveness. But we need to remember that this text was addressed to Christians, not non-Christians. James addresses this epistle “to the twelve tribes which are scattered abroad” (Js 1:1). Since the early church considered itself the true Israel, we shouldn’t be surprised to see James referring to the church as the twelve tribes. James also speaks of a man coming into the assembly (Js 2:2). Surely, this assembly is the public worship of the church.

Do you need to pray to receive forgiveness of your sins?

The power of prayer: “The effective, fervent prayer of a righteous man avails much.” Prayer is a powerful force. When the widow at Zarephath’s son died, Elijah prayed for the child, “then the LORD heard the voice of Elijah; and the soul of the child came back to him and he revived” (1 Ki 17:21-22). “Whatever things you ask in prayer, believing, you will receive” (Matt 21:22).

Do you believe in the power of prayer? Are you praying?

The person of prayer: Elijah is a man whose example is worth emulating. Elijah prayed that it would not rain, and it did not rain for three-and-a-half years; he prayed again, and it rained. Elijah was “a man with a nature like ours.” There was nothing special about Elijah; he was just an ordinary man. If Elijah could accomplish great things while he prayed when he was just an ordinary man, surely we can accomplish great things if we pray.

God expects his people to pray. “Then He spoke a parable to them, that men always ought to pray and not lose heart” (Lk 18:1). “Be anxious for nothing, but in everything by prayer and supplication, with thanksgiving, let your requests be made known to God” (Phil 4:6). “Continue earnestly in prayer, being vigilant in it with thanksgiving” (Col 4:2).

Since God expects us to pray, we shouldn’t at all be surprised that we have this text in James. James doesn’t tell us to pray; he tells us that prayer actually works. When we pray, we are tapping into the most powerful force in the universe, God himself.

When we come to salvation through Christ, we are also tapping into that most powerful force in the universe, God himself. When we respond to Christ in faith and obedience, God forgives our sins. Has God forgiven you of your sins? Do you need to tap into that powerful force?