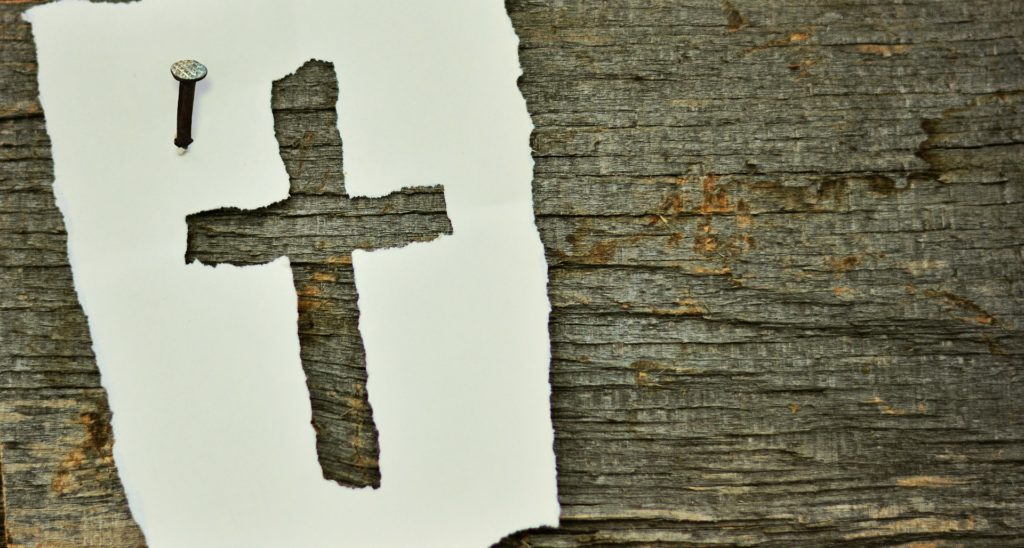 Philip Brooks, an Episcopalian minister in the mid-1800’s said this, “He was born in an obscure village, the child of a peasant woman. He worked in a carpenter shop until he was thirty. Then for three years he was an itinerant preacher. He never wrote a book. He never held an office. He never had a family or owned a house. He never went to college. He never traveled two hundred miles from the place where he was born. He never did one of the things that usually accompany greatness. He had no credentials but himself. He was only thirty-three when the tide of public opinion turned against him. His friends ran away. He was nailed to a cross between two thieves. When he was dead, he was laid in a borrowed grave through the pity of a friend. Nineteen centuries have come and gone, and today he is the central figure of the human race, and the leader of the column of progress. I am far within the mark when I say that all the armies that ever marched, all the navies that ever sailed, all the parliaments that ever sat, all the kings that ever reigned, put together, have not affected the life of man on earth as has that One Solitary Life.”

Isaiah discusses the effect of that “One Solitary Life” in this morning’s text. We know this text refers to Jesus, for Paul quotes verse 10 in Romans 15:12 to speak of God’s intention to accept Gentiles through Christ.

This morning, we want to explore this prophecy of Jesus’ life to see what we can learn.

Isaiah says that a shot would come from Jesse’s stump.

That statement must be understood in light of what Isaiah had written about Assyria. In this section of Isaiah, the prophet is speaking concerning the Assyrian invasion which results in the destruction of the Northern Kingdom and a good bit of damage in the Southern Kingdom. Although God is going to use the Assyrians to punish his people, he is going to turn around and punish the Assyrians. Isaiah speaks of that punishment as the cutting down of trees: “He will cut down the forest thickets with an ax; Lebanon will fall before the Mighty One” (Is 10:34).

The stump of Jesse probably indicates judgment upon the house of David. After the Babylonian Captivity, David’s royal family no longer ruled—they had been cut down like a tree. Remember what David told Solomon: 1 Kings 2:3-4. Because David’s descendants did not walk in God’s ways, God took the throne from them.

But a growth would come up from the stump. This is a message of hope—although judgment had come upon the house of David, there’s going to be new growth. Just as a tree that appears dead in the winter sprouts new life in the spring, God says, “I’m going to bring life back to the house of David.”

The mention of Jesse’s stump heightens the hope of this passage. Jesse, you recall, was David’s father. There’s nothing special about Jesse—he’s just a shepherd in the small village of Bethlehem. Yet, God took his family, a common family, and made them the royal family of Israel and the ancestors of the Messiah.

Jesus brought new life in the place of judgment. “The thief comes only to steal and kill and destroy; I have come that they may have life, and have it to the full” (Jn 10:10).

Think of the new life Jesus brought: Jesus called Levi to apostleship. Levi was a despised tax collector; the Jews considered tax collectors traitors, for they collected revenue for the occupying force, Rome. When Levi threw a banquet for Jesus, the Pharisees grumbled. In response to that grumbling, Jesus said, “It is not the healthy who need a doctor, but the ick. I have not come to call the righteous, but sinners to repentance” (Lk 6:31-32) In other words, Jesus said, “I’ve come to give new life to those who are sinful—for those who need new life, I’m here to give it.”

To a thief about to breathe his last, Jesus said, “I tell you the truth, today you will be with me in paradise” (Lk 23:43). With death hovering right at the door, Jesus says, “I can give you new life. I can give you hope.”

Isn’t that the message you and I desperately need to hear? Even though our lives may be so wrecked with sin that they resemble a useless tree stump, Jesus can give us new life, hew hope, and new vitality.

The Spirit of the LORD would rest upon the Messiah. The Spirit came to rest upon Jesus in a special way at his baptism: “As soon as Jesus was baptized, he went up out of the water. At that moment heaven was opened, and he saw the Spirit of God descending like a dove and lighting on him” (Matt 3:16). Thus, we find this Scripture fulfilled in Jesus’ baptism. Let’s notice what the Spirit would give the Messiah.

The Spirit would give the Messiah wisdom and understanding.

Jesus had much wisdom and understanding. “It is because of him that you are in Christ Jesus, who has become for us wisdom from God” (1 Cor 1:30). In speaking of Christ, Paul writes, “In whom are hidden all the treasures of wisdom and knowledge” (Col 2:3).

The Spirit would give the Messiah counsel and power.

The Spirit would give the Messiah the knowledge and fear of the LORD.

A knowledge of Yahweh basically means to know God’s will. Jesus knew God’s will very well, for he never strayed from it: “He committed no sin, and no deceit was found in his mouth” (1 Pet 2:22). How well do we know the will of God? How obedient are we to the will of God?

The fear of the LORD refers to proper reverence of him.

Fear of the Lord is prescribed for us. It was prescribed under the Old Testament: “It is the LORD your God you must follow, and him you must revere. Keep his commands and obey him; serve him and hold fast to him” (Deut 13:4). “Show proper respect to everyone: Love the brotherhood of believers, fear God, honor the king” (1 Pet 2:17).

Do we delight in the fear of the Lord? Jesus’ life as centered on God, but are our lives? When you’re thinking about doing something, is the main question in your mind, “Would my doing this honor God?” Do you spend time in prayer with God? Do those around you know that you follow God and strive to please him?

The administration of justice was crucial to any ancient monarch, and Jesus is here depicted as one who would judge appropriately.

He would not judge by what he saw or heard.

Jesus would not judge by outer manifestations, because he could see the heart and judge accordingly. When the teachers of the law accused Jesus of blasphemy, we read, “Knowing their thoughts, Jesus said, ‘Why do you entertain evil thoughts in your hearts?” (Matt 9:4). “He did not need man’s testimony about man, for he knew what was in man” (Jn 2:25).

When we are judged before the throne of Christ, we shall be judged by our heart. To the Pharisees, Jesus said, “You are the ones who justify yourselves in the eyes of men, but God knows your hearts” (Lk 16:15). Christianity has raised our duty to God to a whole new level. Jesus does not judge based on what he sees and hears; he can cut through all the different facades made can put up. Jesus knows us as we truly are, for he knows our hearts. What does he see when he looks at your heart?

Jesus taught his people to care for the marginalized of society. “Sell your possessions and give to the poor. Provide purses for yourselves that will not wear out, a treasure in heaven that will not be exhausted, where no thief comes near and no moth destroys” (Lk 12:33). Undoubtedly, you remember Jesus’ words as handed down by Paul: “It is more blessed to give than to receive” (Acts 20:35). Do you see in your life that you care for the needy amongst us?

Jesus would judge the wicked severely: “He will strike the earth with the rod of his mouth; with the breath of his lips he will slay the wicked.”

This is obviously symbolic language for the severe punishment Jesus would bring upon the earth. Although Jesus would care for the needy, he would judge the wicked. Jesus had severe words for the wicked—e.g., to the scribes and Pharisees Jesus said, “You snakes! You brood of vipers! How will you escape being condemned to hell?” (Matt 23:33).

Yet, Jesus will do far more than have severe words when he comes again; he will judge. 2 Thessalonians 1:6-10. A. W. Tozer rightly observed, “The vague and tenuous hope that God is too kind to punish he ungodly has become a deadly opiate for the consciences of millions. It hushes their fears and allows them to practice all pleasant forms of iniquity while death draws every day nearer and the command to repent goes unheeded.”

You’re going to stand before Christ in judgment. “We must all appear before the judgment seat of Christ” (2 Cor 5:10). Will he slay you with the breath of his lips, or shall you find mercy?

Notice the great tranquility prophesied in this passage. “The wolf will live with the lamb, the leopard will lie down with the goat, the calf and the lion and the yearling together.”—These animals which are natural enemies are going to live in peace.

“The infant will play near the play near the hole of the cobra, and the young child put his hand into the viper’s nest. They will neither harm nor destroy.” There’s not a one of us who would allow our children to play with a poisonous snake. RJ was once really enthralled by snakes and snake hunters. We lived in constant fear that he would find a copperhead out in the yard and try to pick it up and put it in his pocket. Yet, this text says that would be okay; cobras and vipers won’t harm children at all.

What should we learn from this symbolic language? Jesus would bring peace between enemies. He did that through bringing Jews and Gentiles together. Ephesians 2:14-18.

But I think there’s another message here and that is that Jesus can give peace to our troubled lives. Jesus brings great peace to our lives. “I have told you these things, so that in me you may have peace. In this world you will have trouble. But take heart! I have overcome the world” (Jn 16:33). “Now may the Lord of peace himself give you peace at all times and in every way” (2 Thess 3:16).

A ship was wrecked in a furious storm and the only survivor was a little boy who was swept by the waves onto a rock. He sat there all night long until, the next morning, he was spotted and rescued. “Did you tremble while you were on the rock during the night?” someone later asked him. “Yes,” said the boy. “I trembled all night—but the rock didn’t.”

That’s the hope we have in Christ! That although we might tremble all night he will never move. Is he your rock this day?