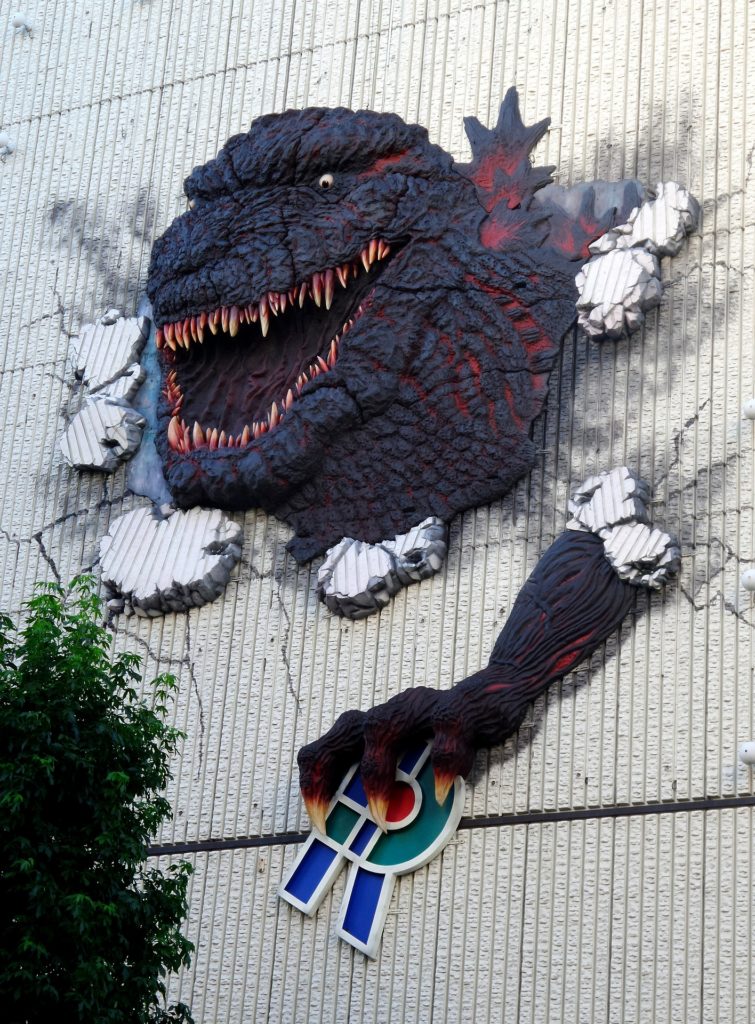 There are stories and myths of ancient peoples who believed that to have the strength of a bear, one ate a bear. To run swiftly, one ate a deer.

The idea that certain foods give persons almost magical powers was popularized in cartoons by Bluto’s nemesis—the chuckling romantic, Popeye the Sailor Man. “I’m strong to the finish, ‘Cause I eats me spinach, I’m Popeye, the sailor man.” In cartoons, Popeye often inhaled an entire can of spinach through his pipe, swallowing it without chewing, causing a humungous lump to travel down his throat, and then, miraculously, his muscles grew to army tanks or pneumatic jack hammers. Thus empowered, he’d hammer, he’d trash, and he’d trounce the bully Bluto, rescuing lovable Olive Oyl from Bluto’s leering clutches. Popeye’s love for spinach did little to make spinach appeal to our taste buds, no matter how often our mom’s might say, “Eat your spinach. It will make you strong like Popeye.”

Now a version of this muscle food is showing up in Japan. Godzilla, Japan’s best-known monster, the defeater of the cruel Rodan, has appeared in stores in a tin can—processed, canned, and ready to eat. “Godzilla Meat”—actually 3.5 ounces of corned beef from Tokyo toy maker Takara Company—is packaged with pictures of the stomping, fire-breathing, irradiated dinosaur made famous by movies that started coming out in the 1950’s. People can eat Godzilla and become energetic and powerful. “It’s got dreams mixed in with fun,” said Takara spokeswoman Yoko Watanabe. “It’s like Popeye and his can of spinach.”

Of course it’s a marketing ploy. But it speaks to our desire for a quick fix and a lock-and-load approach to power and strength. It would be huge if Godzilla strength actually could come contained in a can. Our world economy would change. Production would soar. If those types of muscles came in a tin can, we’d be a world of Titans.

But every kid who’s ever eaten spinach with Popeye on the can knows you can’t judge a can by its cover. Every kid who’ll try Godzilla meat will discover that what’s on the outside doesn’t always show up on the inside.

Samuel, the judge of Israel, had a similar notion. He thought he could tell the power of a man by taking the measure of his pecs, his abs, and his triceps. We tend to function a lot like Samuel. We tend to judge inner character by outward appearance. The labels on our clothes, the labels on our cars—these externals, and others like them, are the clues we take, or mistake, to indicate inner character.

Samuel learned that God doesn’t judge by such things. Strength spiritually doesn’t come from eating spinach or Godzilla meat—spiritual strength comes from the inside. Just as we can’t judge a can by the junk which might be on the inside, we can’t judge people by what’s on the outside.

Let’s remember the context for this morning’s text. Saul had been rejected as the king of Israel: When Samuel, by the word of the LORD, instructed Saul to attack the Amalekites, he told the king, “Do not spare them; put to death men and women, children and infants, cattle and sheep, camels, and donkeys” (1 Sam 15:3). Saul, of course, did no such thing: 1 Samuel 15:9. The LORD told Saul through Samuel: “Because you have rejected the word of the LORD, he has rejected you as king” (1 Sam 15:23).

Obviously because the LORD had said Saul could no longer be king, he was going to need to choose someone else to be king, and the LORD sends Samuel on that mission. On that mission, Samuel learns a lot about the type of people God uses: He doesn’t necessarily use those who look like Godzilla on the outside, but he uses those who are Godzillas on the inside.

To disguise his purposes from Saul, Samuel took a sacrifice to Bethlehem and had the elders of the town invite Jesse and his sons to the sacrifice.

The sons of Jesse, save David, arrive. Samuel sees Eliab and thought, “Surely the LORD’s anointed stands here before the LORD.”

Eliab must have been some sight to behold. The Lord makes mention of his appearance in verse 7. Saul was a good-looking man: Kish “had a son named Saul, an impressive young man without equal among the Israelites” (1 Sam 9:2). Samuel must have thought, “Not only does this young man have similar characteristics to Saul, but the people will follow him, for he’s good-looking.”

Looks are so important in this society. How many people go under the knife just to rid themselves of some physical defect? An executive was traveling. While writing postcards back home, he wrote the usual, “The scenery is beautiful, wish you were here.” But inadvertently he wrote to his secretary, “The scenery is here, wish you were beautiful.” Samuel doesn’t wish Eliab were beautiful, but because of his beauty believes he must be the next king of Israel.

Eliab was also tall, a point the Lord also makes at verse 7. Again, Saul was a tall man: 1 Samuel 10:23-24. The Israelites were generally short people—perhaps that’s part of the reason they had such trepidation when Goliath showed up—and here’s a tall leader for them.

Jesse had seven sons pass before Samuel, and the Lord rejects them all.

Why? The Lord explained it like this to Samuel: “The LORD does not look at the things man looks at. Man looks at the outward appearance, but the LORD looks at the heart.”

Before God, the way a man looks on the outside doesn’t matter. Whether we are too fat or too skinny, too bald or too hairy or too gray, too tall or too short, God doesn’t care. We as humans tend to care a great deal what we and others look like, and we are quick to judge based on appearances. Someone who’s fat must be lazy. Adolf Hitler said, “Imagine me going around with a potbelly. It would mean political ruin.” Oh, that he had that potbelly! Someone with some teeth missing must be poor or uneducated or both. How many people buy hair color to hide the gray? How many people have hair transplants to hide the baldness?

God looks on the inside. To God it’s the heart that matters.

You know why the heart matters to God. Sin originates in the heart. “I tell you that anyone who looks at a woman lustfully has already committed adultery with her in his heart” (Matt 5:28). “Out of the heart come evil thoughts, murder, adultery, sexual immorality, theft, false testimony, slander” (Matt 15:19).

Likewise, our service to God originates in the heart: “Love the Lord your God with all your heart and with all your soul and with all your mind. This is the first and greatest commandment” (Matt 22:37-38). Our faith originates in the heart: “If you confess with your mouth, ‘Jesus is Lord,’ and believe in your heart that God raised him from the dead, you will be saved” (Rom 10:9). The heart undergoes a change which allows us to come to Christ: “A man is a Jew if he is one inwardly; and circumcision is circumcision of the heart, by the Spirit, not by the written code” (Rom 2:29).

A kindergarten teacher asked the class, “What is the color of apples?” Most of the children answered red. A couple said green. But one student raised her hand and said white. The teacher tried to explain that apples could be red or green or even golden. But never white. But the student was adamant, and finally said, “Look inside.”

Jesse said “There is still the youngest, but he is tending the sheep.” The Hebrew word for “youngest” can almost mean “shortest” or “smallest.” I really think the way the word is used in this verse, there is a double meaning; the word means both “youngest” and “shortest.” In other words, Jesse says, “Samuel, I have another son, but he’s short and he’s young; he’s simply not kingly material.”

Samuel orders this youngest son brought and says that all the others will wait for him.

When the youngest arrived, he was ruddy, with a fine appearance and handsome features. The word “ruddy” refers to being red-haired, and this kind of hair is typically associated with fair and delicate skin. This boy just doesn’t look like a king. He is short; he is young; he has delicate skin. This boy looks like he belongs in field shepherding sheep, not in the palace shepherding God’s people.

But you know what God told Samuel to do: “Rise and anoint him; he is the one.” Samuel gets up and anoints him king in the presence of his brothers.

God took the unlikely candidate and made him the leader of his people. But God has a long history of taking unlikely people and doing great things through them. There was Moses, a man with a stammer. God picked him as a spokesman. Sarah couldn’t have children. God made her the mother of a nation. Matthew was a social outcast. God made him a writer and apostle. Peter was a fisherman. God made him an evangelist.

In the aftermath of the 9/11 attacks Americans were heartened to learn of the heroism of the passengers on Flight 93. The United Airlines Boeing 757 took off from Newark, got over Cleveland and was turned around by the hijackers. Not long after, however, the plane crashed in a field near Shanksville, Pennsylvania. A number of stories later emerged.

Todd Beamer, for example, on learning through his cell phone about the cowardly attacks on the Twin Towers, together with fellow passengers stormed the terrorists in the pilot’s cabin, all losing their lives in the process, while saving, only God knows how many other lives. Beamer’s last words, heard over his cell phone, apparently spoken to his fellow ordinary passengers were: “Are you ready? Let’s roll.”

Beamer was no Schwarzenegger or Harrison Ford. He was an ordinary guy, an unlikely hero. Are you ready, like Beamer, like David long before him, to become an unlikely hero, to do with the power that God supplies the tasks to which God has called us? Let’s roll.