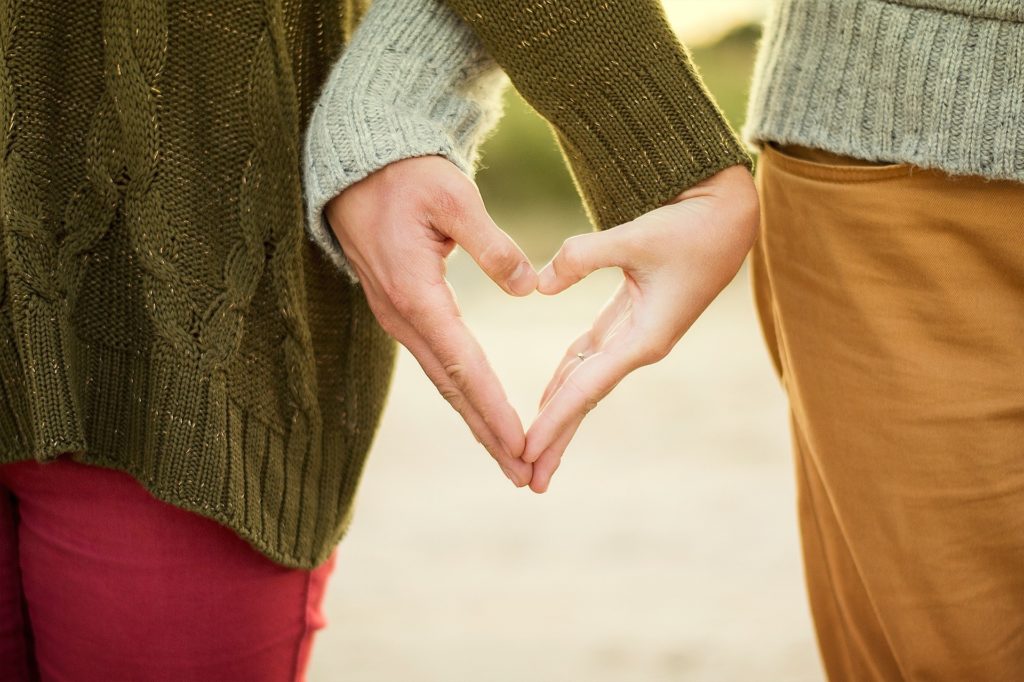 During World War II, Adolf Hitler commanded all religious groups to unite so that he could control them. Among the Brethren assemblies, half complied, and half refused. Those who went along with the order had a much easier time. Those who did not faced harsh persecution. In almost every family of those who resisted someone died in a concentration camp. When the war was over, feeling of bitterness ran deep between the groups and there was much tension.

Finally they decided that the situation had to be healed. Leaders from each group met at a quiet retreat. For several days, each person spent time in prayer, examining his own heart in the light of Christ’s commands. Then they came together.

Francis Schaeffer, who told of the incident, asked a friend who was there, “What did you do then?” “We were just one,” he replied. As they confessed their hostility and bitterness to God, a spirit of unity prevailed among them. Love filled their hearts and dissolved their hatred.

The Corinthians could certainly have used a retreat where they confessed their hostility and bitterness. “It has been reported to me by Chloe’s people that there is quarreling among you, my brothers. What I mean is that each one of you says, ‘I follow Paul,’ or ‘I follow Apollos,’ or ‘I follow Cephas,’ or ‘I follow Christ” (1 Cor 1:11-12). “While there is jealousy and strife among you, are you not of the flesh and behaving only in a human way?” (1 Cor 3:3). Their jealousy and strife spilled over into the courts of law: “When one of you has a grievance against another, does he dare go to law before the unrighteous instead of the saints?” (1 Cor 6:1). Their grievances spilled over to the point that they could not share with one another during the Lord’s Supper: “When you come together, it is not the Lord’s supper that you eat. For in eating, each one goes ahead with his own meal. One goes hungry, another gets drunk” (1 Cor 11:20-21). There was also division over the use of spiritual gifts. To that end, Paul writes: “The eye cannot say to the hand, ‘I have no need of you,’ nor again the head to the feet, ‘I have no need of you’” (1 Cor 12:21).

What Paul does in this paragraph is to provide a retreat for the Corinthians to help them overcome their hospitality and bitterness. The apostle demonstrates the way Christian love ought to behave. Love, in essence, is, as Paul makes clear int his paragraph, seeking the good of one’s neighbor. In the discussion of meat offered to idols, Paul urges such behavior: “Let no one seek his own good, but the good of his neighbor” (1 Cor 10:24).

The idea of patient is that it takes one a long time before breaking into flames.

Patience is a Christian quality that extends far beyond tongue-speaking. “We urge you, brothers, admonish the idle, encourage the fainthearted, help the weak, be patient with them all” (1 Thess 5:14). “The Lord’s servant must not be quarrelsome but kind to everyone, able to teach, patiently enduring evil” (2 Tim 2:24).

Can you really imagine the lack of kindness that was so prevalent in the Corinthian church? The brethren didn’t like what others were doing so they were suing them before unbelievers. The rich hurried to the assembly to take the Lord’s Supper to keep from sharing their food with their poorer brothers. Those who could speak in tongues placed themselves far above those who could not. Whatever that was, it was not love, as Paul makes obvious here.

In the second century, the church had it right. In fact, the kindness demonstrated by Chrsitians was so remarkable that pagans referred to them not as christiani (Christians) but as chrestinani (“those made up of kindness”).

When the world looks at us, do they see us as chrestinani, as those made up of kindness? When a member of the congregation is in the hospital, do we stop by to offer support and prayer? When a couple needs some alone time, do we offer to watch the children? How kind are we?

British statesman and financier Cecil Rhodes, whose fortune was used to endow the famous Rhodes Scholarship, was a stickler for correct dress. A young man invited to dine with Rhodes arrived by train and had to go directly to Rhodes’s home in his travel-stained clothes. Once there he was appalled to find the other guests already assembled wearing full evening dress. After what seemed a long time, Rhodes appeared in a shabby old blue suit. Later the young man learned that his host had been dressed in evening clothes, but he had put on the old suit when he heard of his young guest’s dilemma.

Kindness puts the needs of others in front of our own needs. Kindness says, “What can I do to help?” Are we demonstrating that type of kindness?

It is not exactly certain what Paul means here, and there are three equally good possibilities.

One: The Greek term means “to cover as a roof.” The idea could be that love covers as a roof, i.e., love protects.

The Corinthians certainly needed to protect one another: e.g., those who couldn’t speak in tongues could have used protection from those who scorned them. God intends his people to protect the helpless: “Seek justice, correct oppression; bring justice to the fatherless, plead the widow’s cause” (Is 1:17).

Do we protect out of love? Do we protect from hunger the widow who might otherwise not eat? Do we stand up for our brethren when they are mocked? Are we a protecting people?

Two: The idea here could also be that love bears up as a support. Just as a roof has supports which hold it up, the idea could very well be here that love offers support.

The Corinthians could certainly have done a better job of supporting one another: those who spoke in tongues and thought they were the epitome of Christianity could have offered support to those with other gifts. They could have supported them to support them to pursue and exercise those gifts as God intended.

Do we support one another? When a brother prays publicly for the first time and mumbles off those familiar repetitions, do we thank him for his dedication or think he could have done far better? When a sister responds to the invitation and asks for our prayers, do we offer a hug and support or do we have to make sure we beat the Baptist to the restaurant?

Three: The idea could also be, as it is typically translated, to forebear, to put up with.

Communal living is no easy task—you know that from being married. We have a lot to bear in marriage, don’t we? We see our spouse as he or she truly is: faults and all. Maybe he doesn’t pick up his underwear, put the toilet seat down, or perhaps she can’t cook, and she squeezes the toothpaste in the wrong spot. That’s when love bears all things—we deal with those quarks we all have.

It’s not necessarily easy being part of a congregation. We know one another quite well, and we have our quarks. Maybe I read from a translation, and it irritates you that I don’t read from the translation you prefer. Maybe when it’s time for a covered dish dinner, I always get in front of ou, because I’m afraid you’ll eat too much. That’s when love bears all things—we deal with those quarks in our brethren, we overlook them, and we live in harmony.

Are we bearing all things?

Love trusts—when I love you, I’m going to believe what you tell me, whatever it is. That’s the way marriage works, isn’t it? If Tammy says that she’s going to meet a friend for lunch, but I think she’s going to meet a boyfriend and so I hire a private investigator to follow her, how long are we going to be married? If every time I had gone to Alabama to work on my doctorate and Tammy was absolutely convinced that I was going down there and staying out drunk all night, what type of relationship would we have?

How much do we really trust one another? If I say I couldn’t make it when you were in the hospital because I had a cold I was afraid of giving to you, do you believe me? If you tell me that you’ll be here Saturday morning to help me pick up trash along the side of the road, do I believe you?

Biblically hope is a joyful expectation of what is yet to come. “Hope does not put us to shame, because God’s love has been poured into our hearts through the Holy Spirit who has been given to us” (Rom 5:5). I might be put to shame if I believe I’m going to win that Publisher’s Clearinghouse Sweepstakes and go out and buy a house, a boat, a jet, and a car I cannot afford. Yet, biblical hope is not going to put me to shame. “In this hope we are saved. Now hope that is seen is not hope. For who hopes for what he sees? But if we hope for what we do not see, we wait for it with patience” (Rom 8:24-25). Hope is waiting with patience what we know is yet to come.

What does all this have to do with love? I’m going to anticipate the best for our relationship. The Corinthians could certainly have stood to have done that. Instead of taking their brethren to court, they could have believed that their brethren were bought with the blood of Jesus and with some patience and encouragement they could be transformed to his likeness. Instead of bickering over whose gift was best, they could have hoped in the exercise of those gifts with the full assurance that God had given the gifts most needed in Corinth.

While the spiritual gifts the Corinthians possessed were going to quit, love doesn’t—love keeps going. The Corinthians needed to endure all things out of love. Why should there be divisions over who preacher better than who? If one believed Paul was better while another believed Apollos was better, could love not endure that difference? Could the brethren not love one another even though they disagreed? The Corinthians could have had an enduring love in spite of the socio-economic differences. Could the rich not have endured in love for the poor rather than hoarding their riches when the church assembled?

Fortunately, God’s love for man has endured through our fallenness and rebellion. “God shows his love for us in that while we were still sinners, Christ died for us” (Rom 5:8). If God has so loved us, ought we also not so love one another?

Yet, I don’t believe that understanding is faithful to the context of this passage. Paul’s point isn’t that love is eternal, but that love is going to outlast the spiritual gifts the Corinthians are fighting about. There was absolutely no reason to fight over whose gift was better, for those gifts were coming to an end, but love shall continue throughout the Christian age.

We don’t have the spiritual gifts the Corinthians fought over. Yet, we have as much a need to love one another as did they. Are we loving one another?

Do you need to come this morning and respond to God’s love?