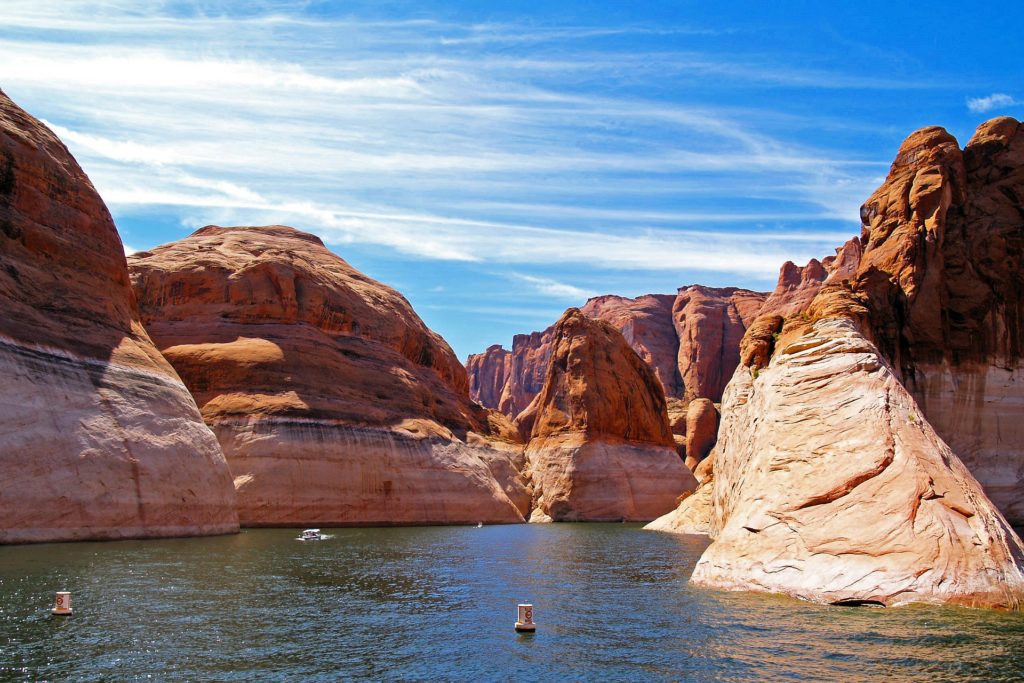 Rocks can be extremely useful. For example, int eh city of Pottsville, Pennsylvania, the broken end of a high voltage wire was lying upon the pavement, along which the engineer, Mr. Hildebrand, was walking, unmindful of the fact. Mr. Schlitzer saw the danger and yelled to warn the engineer, but his voice was drowned by the noise all around. Picking up a stone, Schlitzer threw it and hit Hildebrand on the chest. He looked up and avoided the wire just as he was about to step on it. With tears streaming down his face, he thanked Schlitzer for saving his life.

The Lord is “The Rock” whereby David’s life was saved. In Psalm 31, David outlines different disasters from which the Lord saved him—enemies, physical illness, a conspiracy, and great terror.

Throughout all these trials, the Lord was David’s rock. A rock is permanent and not easily moved. “Trust in the Lord forever, for the LORD God is an everlasting rock” (Is 26:4). It was, after all, because the wise man built his house upon the rock that his home stood firm in the face of the flood (Matt 7:24-25).

Because of the permanent, settled nature of a rock, individuals often took refuge in the crevices of rocks during time of war or natural disaster. “Saul and his men went to seek him. And David was told, so he went down to the rock and lived in the wilderness of Maon” (1 Sam 23:25). “Enter into the rock and hide in the dust from before the terror of the LORD, and from the splendor of his majesty” (Is 2:10). Thus, the great protective nature of God caused the Jews to speak of the Lord as the Rock where they could hide from calamity.

God provides great protection in time of trouble. In this morning’s text, David is struggling mightily and he asks the LORD to come to his aid.

Notice the great personal nature of this text. David says, for example, “You are my rock and my fortress” (Ps 31:3). When David is suffering, he isn’t interested in knowing that God is the rock of Jonathan or the rock of Saul or the rock of Moses. David needed to understand that God would help him and that God cared about him.

Is that one of the greatest teaching in all of Scripture? God isn’t just your rock or his rock, but he is MY rock. Each one of us brought struggles to this assembly. We each have some hurt, some trial for which we need the Lord’s help and protection. How would you like to sit here this morning knowing that God will help me with my struggles, but he’s going to leave you out in the cold? God is not just the rock, but he is MY ROCK! God cares about me, and he will help me!

As I have mentioned, David expresses several different struggles in the entirety of this Psalm. However, in the first six verses that we’re studying this morning, his concern is with the great enemies against whom he is contending. “You take me out of the net they have hidden for me, for you are my refuge.” “I hate those who pay regard to worthless idols, but I trust in the LORD.”

We do not know the identity of David’s enemy in this Psalm—the enemy could have been Saul or Absalom or one of the armies David faced as king. David’s enemies, however seem to have been operating in secret. David refers to the “net they have hidden” for him. Obviously, the best nets are those that are so well hidden the animal doesn’t even see the net until it’s far too late. At least some of David’s enemies seem to be pagans, for he mentions that he hates those who trust in worthless idols.

Regardless of the specific enemies David was facing here, he was able to find refuge in God.

We, like David, face a multitude of enemies. Enemies are nothing new for the Christian. Jesus understood that his people would have enemies. “Love your enemies and pray for those who persecute you” (Matt 5:44). Jesus doesn’t say that we should love our enemies if we have them but he takes having enemies as a given.

The Apostle Paul knew well about enemies. After Saul’s conversion we read, “When many days had passed, the Jews plotted to kill him” (Acts 9:23). When Paul was urging people to turn from lifeless idols, he found an enemy in a certain silversmith named Demetrius (Acts 19:13ff).

Each of us has an enemy against whom we contend. Perhaps that enemy is someone you love more than life itself. Jesus says that those closest to us may, in fact, be our enemies: “Do not think that I have come to bring peace to the earth. I have not come to bring peace, but a sword. For I have come to set a man against his father, and a daughter against her mother, and a daughter-in-law against her mother-in-law. And a person’s enemies will be those of his own household” (Matt 10:34-36). Maybe a close family member constantly berates you for your desire to worship faithfully. Perhaps your spouse becomes quite angry when he or she sees your generous contribution.

We collectively face the enemy of the ungodly in this world. There are some who claim to be Christians but seek to destroy truth. “Many deceivers have gone out into the world, those who do not confess the coming of Jesus Christ in the flesh. Such a one is the deceiver and the antichrist” (2 Jn 7). How many deceivers are there in this very community? How many once walked faithfully in Christ but now seek to beguile the naïve? How many times have you talked with someone about his or her soul and the answer came back, “My pastor says. . . ?”

There are many int his world who seek to destroy all that is true and pure. Many “walk as enemies of the cross of Christ. Their end is destruction, their god is their bely, and they glory in their shame, with minds set on earthly things” (Phil 3:18-19). How often do we contend against such enemies? How often do you parents need to change the TV channel quite quickly because a producer is an enemy of the cross of Christ? Much pagan thought is taught to our children—do whatever feels good to you; we all descended from a single-celled organism in a pre-organic goo.

Yet, regardless of how many enemies we face, we know that God is “The Rock.”

As “The Rock,” the Lord has a very specific role that he fulfills.

As “The Rock,” the Lord is a refuge. “Be a rock of refuge for me, a strong fortress to save me!” “You take me out of the net they have hidden for me, for you are my refuge!”

The entire idea of a “refuge” is a place where one could find safety in times of crisis. The Jews, you recall, had cities of refuge where one who had accidentally killed another could flee to escape being killed by the victim’s family. The Lord had been David’s refuge over and over. When Saul urged David not to fight Goliath, David answered, “The LORD who delivered me from the paw of the lion and from the paw of the bear will deliver me from the hand of this Philistine” (1 Sam 17:37). When Saul attempted to take David’s life, the Lord delivered the king-to-be over and over.

Regardless of the enemy David was facing, he knew that he could go to the Lord and find refuge.

As “The Rock,” The Lord is a redeemer. David says, “Into your hand I commit my spirit; you have redeemed me, O LORD, faithful God.”

David committed his soul to God, for the faithful Lord had redeemed him. Inherent int eh idea of redemption is the idea of being released from captivity. That captivity often comes at the hand of one’s enemies. “Draw near to my soul, redeem me; ransom me because of my enemies!” (P 69:18). David views himself as caught in a trap and needing rescuing. God, in his faithfulness, would come to David’s defense and redeem him.

So, what is the point? It’s nice to know how God would help David when surrounded by his enemies, but what about our enemies? Our enemies aren’t seeking our life; is there any word in this text for us? We face nothing comparable to what David faced; can we learn anything at all here?

We, like David, can find solace in God’s righteousness vis-à-vis the wickedness of our enemies. Regardless of what man-made trial we face—from the hand of a loved one or a coworker or this evil society—that evil springs from evil hearts. “All that is in the world—the desires of the flesh and the desires of the eyes and pride in possessions—is not from the Father but is from the world” (1 Jn 2:16). Juxtaposed with all the evil of this world is the righteousness of God: “God is light, and in him is no darkness at all” (1 Jn 1:5).

While we may be greatly maligned in this world, we know that God is righteous—Our God always does the right thing. God will keep every promise he has made—he will stand beside us in our trial, he will answer every prayer, and he will richly reward when this life is no more. Thus, even in the face of great enemies, we have great assurance.

Like David, we can trust in God as our refuge when facing enemies. David knew that when enemies surrounded him that God would shelter him and protect him from the evil he was facing. God will likewise protect us from the evil we face. This doesn’t mean that God will remove evil from us—he didn’t remove it from David; he did not remove it from his own Son.

However, God will provide protection in the face of evil. “I tell you, my friends, do not fear those who kill the body, and after that have nothing more that they can do” (Lk 12:4). Those who are evil can cost us our jobs, they can malign us all they want, they can bring great temptation our way, but they cannot touch the soul! God will protect us in spite of the enemies that are bound to come.

Furthermore, no temptation from any enemy will be more than we can handle. “God is faithful, and he will not let you be tempted beyond your ability” (1 Cor 10:13). God permits enemies to torment us, but they cannot torment us beyond what God permits.

We also have the confidence that God is our redemption in the face of our enemies. God will deliver us from the tribulation we endure in this life. When this life is no more, we shall dwell in a land without any enemies, without any suffering of any kind. Paul writes, “I consider that the sufferings of this present time are not worth comparing with the glory that is to be revealed to us” (Rom 8:18). Paul knew a great deal about suffering. As one who knew a great deal about suffering, Paul says that comparing the problems we currently face to the glory we shall have in the future is far worse than comparing apples and oranges—There is no comparison at all.

Is God your rock this morning? Do you have the assurance that glory will be revealed to you?