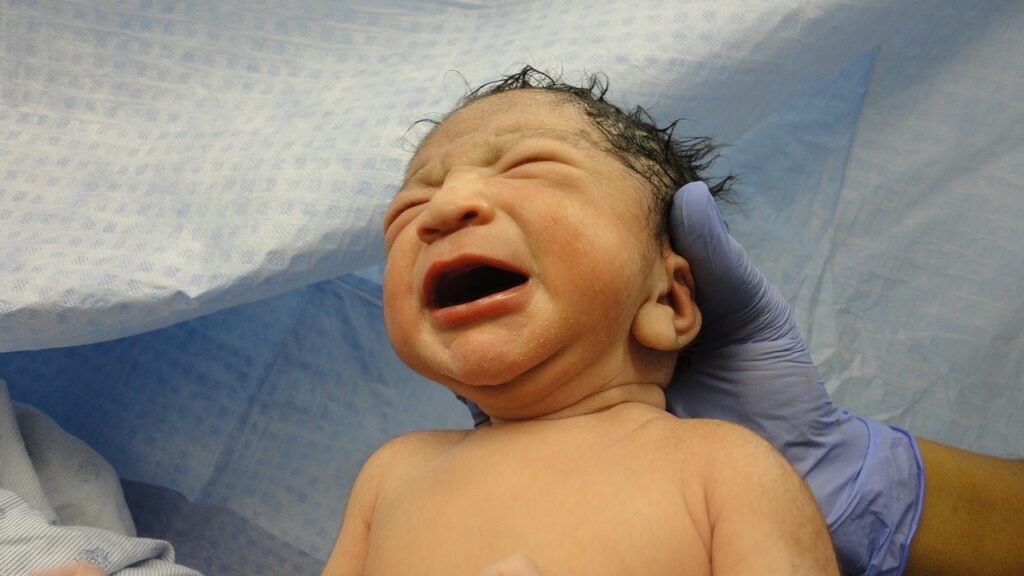 Tammy’s blood pressure would not stay down when she was expecting RJ, and her physician decided to induce labor 3 weeks before RJ’s due date. Tammy and I went to the hospital on a Tuesday evening, and Wednesday morning, the nurses give her a bag of Pitocin to induce labor. She had contractions on Wednesday and Thursday and Friday, but she would not go into labor.

Around lunch on Friday, the doctor broke Tam’s water, and labor then came quickly. However, RJ had his hand up over his head, and he just could not be born naturally. He and Tammy were both in distress, so the doctor decided she would do a Caesarean. Tammy and I were both rushed to the OR where she finally gave birth. That was a roller coaster of a week!

You could all tell stories of when your children or grandchildren were born. Men, if you’re of a certain age, you might tell of pacing the waiting room waiting for news. You younger men could tell of holding your wife’s hand as she gave birth. Ladies, some of you were sedated and don’t remember the actual birth; others of you remember giving birth rather well. Regardless of how your child came into this world, you sisters certainly remember counting those fingers and toes, you remember bringing that baby home, you remember those first sleepless nights, and you can remember rocking him or her to sleep.

Joseph certainly rejoiced when Jesus was born—the angels did, the magi did, Simeon did, Ana did, Elizabeth did. But he didn’t rejoice when he learned Mary was expecting. He and Mary were betrothed to one another, but they had not been together sexually; Joseph had to think Mary had been with another man. If that was the case, Joseph had every right to humiliate Mary and to call her out as an adulteress, but he was a just man, so he planned to divorce Mary privately. While he was planning to divorce Mary, an angel of the Lord appeared to Joseph and told him to hold his horses—Mary had not been unfaithful, the Child she carried was conceived by the Holy Spirit, and he was to take Mary as his wife. Joseph followed the word of the Lord and married his betrothed. Joseph, because of God’s word, went a different direction than he had planned. Joseph’s example demonstrates: “You obey God when you give up your own way.”

In antiquity, betrothals were as binding as marriage, except that the marriage had not been consummated; notice at verse 19 Matthew called Joseph Mary’s “husband.” A betrothal could only been broken through fornication—considered adultery—or death.

During the betrothal, Mary became “with child from the Holy Spirit.” Matthew added “from the Holy Spirit” to tell his readers what was really taking place, but Joseph didn’t know. Joseph and Mary likely have spent little, if any, time alone, for people generally believed that males and females left alone would succumb to sexual temptation. Remember, too, that God had not spoken through prophets or performed miracles in over 400 years, so Joseph wouldn’t have thought about a miraculous conception.

Joseph, a just man, didn’t want to shame Mary publicly. People could be stoned for adultery, but the Jews had to ask the Romans permission to put people to death, so stoning was seldom practiced in the first century. Yet, Joseph could have taken Mary to the town gate and divorced her publicly and named her an adulteress. In fact, the law and culture of first-century Palestine required divorce in cases of unfaithfulness.

Joseph, wishing to protect Mary, planned simply to give her a certificate of divorce and keep things quiet.

While Joseph considered his options, an angel appeared to him and told him to take Mary as his wife, for the Child had been conceived through the Holy Spirit’s power.

Joseph took Mary as his wife and took responsibility for raising a son which was not his. He also exposed himself to shame; everyone in town would think that Joseph and Mary had been immoral. Yet, Joseph—and Mary, too—obey God.

Joseph did not consummate the marriage until after Jesus’s birth. Then, males normally married between 18 and 20, primarily because Jewish teachers said that young men could not control themselves sexually. Yet, Joseph refrained from intercourse even after he has married to preserve the Virgin Birth; this demonstrates just how righteous Joseph was.

This text is rich, and there is much I haven’t discussed. But I want you to see Joseph as an example of obedience to our God and learn: “You obey God when you give up your own way.” How can you emulate Joseph’s example?

You must examine your own way. Joseph knew what he wanted—to divorce Mary, albeit privately. David knew his own way—he wanted to build God a temple (2 Sam 7:2-13). When Jesus was in the Garden, he knew his own way—he prayed to the Father, if at all possible, to remove the cup from him (Matt 26:39). Paul knew his own way—about his thorn in the flesh, he wrote, “Three times I pleaded with the Lord about this, that it should leave me” (2 Cor 12:8). Jude knew his own way—he planned to write an epistle “about our common salvation” (Jude 3).

Look at your heart and see your own way. You must examine yourself: “Examine yourselves, to see whether you are in the faith. Test yourselves” (2 Cor 13:5). See what you really want in life. Take a piece of paper and write down the top five things you want in life. Be honest with yourself and with your God. We’ll come back to that list in a minute.

You won’t hear God’s will through an angel or a prophet or a voice from heaven. But the word of God is in Scripture; about Scripture, Peter wrote, “Men spoke from God as they were carried along by the Holy Spirit” (2 Pet 1:21). God has put his will in Scripture and nowhere else; you must, therefore, turn to Scripture and Scripture alone to know God’s will for your life.

How will you obey God? Joseph found obedience in marrying his betrothed. You, too, must set aside your wants and wishes and obey God; after all “You obey God when you give up your own way.” What will you do this very day in obedience to your God?