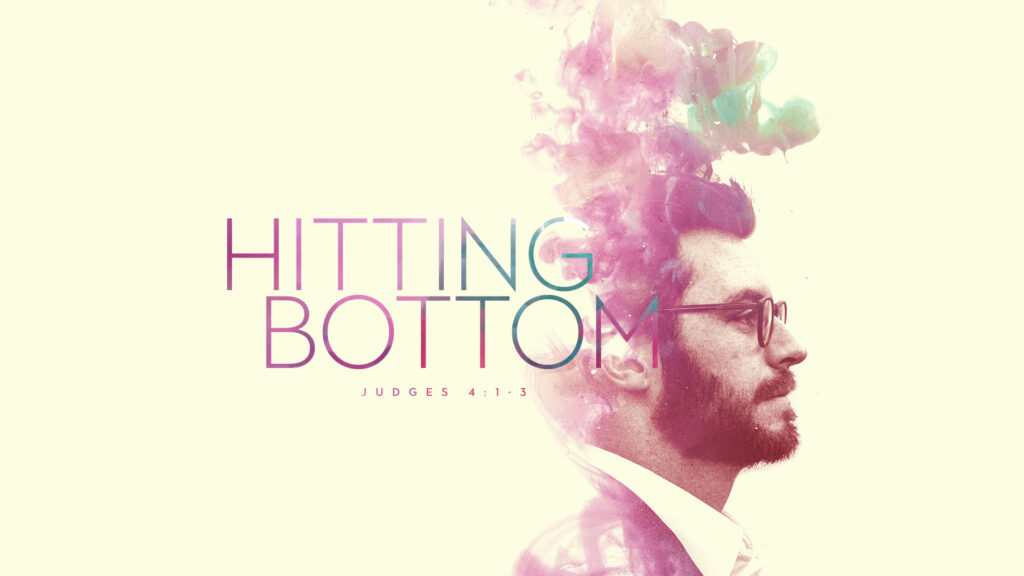 When Tammy and I first married, I must admit that I did not treat her with the dignity and respect she deserves.

One day, she and I had an argument, and everything came to a head. In fact, Tammy threw me out and said that our marriage was over. I didn’t know what to do, so I got in my car and starting driving; a few hours later, I was in Nashville, Tennessee. I pulled over, found a payphone, and called Tammy. I asked her if I could come home. She said I was welcome at home on one condition—that I go to therapy. I didn’t have much of a choice, so I drove the six hours back home and started therapy.

You see, I had no other option but to correct my behavior. I had to hit rock bottom.

In this morning’s text, the Israelites needed to hit rock bottom so that they might come back to God. God helps them to reach rock bottom; in fact, “the LORD sold them into the hands of Jabin king of Canaan” (Judg 4:2). As we explore this passage, we see: “God allows you to hit rock bottom to understand that you need him.”

The LORD “sold” his people into the hands of Jabin king of Canaan, who reigned in Hazor.

There should not have been a king of Canaan. God had said to Moses, “Speak to the Israelites and say to them: ‘When you cross the Jordan into Canaan, drive out all the inhabitants of the land before you. Destroy all their carved images and their cast idols, and demolish all their high places” (Num 33:51-52). God further gave a promise to his people: “If you do not drive out the inhabitants of the land, those you allow to remain will become barbs in your eyes and thorns in your sides. They will give you trouble in the land where you will live” (Num 33:55). The Israelites did not completely destroy the Canaanites: “When Israel became strong, they pressed the Canaanites into forced labor but never drove them out completely” (Judg 1:28). God cannot be mocked and he keeps his every promise—it’s no surprise, then, to find that the Canaanites left in the land became a thorn in Israel’s side.

King Jabin and his commander had 900 iron chariots. Iron chariots were the tanks of the ancient world; if you had an iron chariot when your enemy did not, you would win the battle. Notice what happened when the Israelites encountered an army with iron chariots: They “were unable to drive the people from the plains, because they had chariots fitted with iron” (Judg 1:19). Because Jabin had iron chariots, he cruelly oppressed the Israelites for 20 years.

It was then that the people “cried to the LORD for help.” Being in distress can cause people to cry out to the LORD. When Jonah was in the belly of the great fish, he prayed: “In my distress I called to the LORD, and he answered me. From deep in the realm of the dead I called for help, and you listened to my cry” (Jon 2:2).

One: You see rock bottom.

Each of you has different struggles; therefore, you have different bottoms. Spend some time thinking about what your bottom would be like. If you don’t give up your favorite sin, what consequences might you face? If your favorite sin became known, what would happen to your marriage? Your career? Your relationship with your children? How much embarrassment would you face at church? In the community?

Get off to yourself and think long and hard about what your bottom might look like. Jesus urged us to count the cost of being his disciple: Luke 14:28-32. Is your sin worth the cost?

Every sin has consequences—i.e., a bottom. Judas faced horrible guilt for his sin; he couldn’t bear the guilt and went out and hanged himself. David lost the son conceived with Bathsheba. Ananias and Sapphira dropped dead when they lied to the Holy Spirit. The ultimate consequence of sin—the ultimate bottom—is eternal destruction: “While people are saying, ‘Peace and safety,’ destruction will come on them suddenly, as labor pains on a pregnant woman, and they will not escape” (1 Thess 5:3). What consequences do you face—or do you potentially face—for your sin?

Two: You cry to God.

The Israelites realized that they could not save themselves from the Canaanites, and they cried out to God. You need to realize that you cannot save yourself and cry out to God. As he looked at his sin, Paul wrote, “What a wretched man I am! Who will rescue me from this body that is subject to death? Thanks be to God, who delivers me through Jesus Christ our Lord!” (Rom 7:24-25).

Since God will deliver us, we need to cry to him when we find ourselves in sin. When Paul was in sin, he was told, “Get up, be baptized and wash your sins away, calling on his name” (Acts 22:16). Paul needed to call upon the Lord; since Paul was not in Christ at that time, calling on the name of the Lord meant being baptized into Christ. When Simon had believed and been baptized but fell back into sin, he was told, “Your heart is not right before God. Repent of this wickedness and pray to the Lord in the hope that he may forgive you for having such a thought in your heart” (Acts 8:21-22).

Three: You trust in God’s grace.

In Judges 4, God’s grace for his people meant that he removed the consequence of their sin: “On that day God subdued Jabin king of Canaan before the Israelites” (Judg 4:23). The people no longer lived under Jabin’s oppression; they were free.

I cannot promise you that God will remove the consequences of your sin. For example, if I have an affair, Tammy can put me away and marry another; however, God’s grace can remove my sin and provide an answer to my guilt.

God’s grace can forgive every sin. When Jesus was having dinner at the home of a Pharisee, a prostitute anointed Jesus’s feet with perfume and her tears; she then washed the Lord’s feet with her hair. Simon couldn’t believe that Jesus was allowing such a woman so close to him, let alone allowing her to touch him. Jesus, however, said to the woman, “Your sins are forgiven” (Lk 7:48). When the people at supper began to grumble against Jesus, the Lord said to her, “Your faith has saved you; go in peace” (Lk 7:50). This prostitute didn’t need to wallow in guilt; instead, she could go in peace because Jesus had forgiven her. You don’t need to wallow in guilt, for Jesus has forgiven you!

Four: You must put away the sin in your life.

After Deborah and Barak won victory over Jabin, “the land had peace forty years” (Judg 5:31). However, once more “the Israelites did evil in the eyes of the LORD, and for seven years he gave them into the hands of the Midianites” (Judg 6:1). What if the people had put away the sin of their idolatry once and for all? They would have had peace for far more than 40 years. God would have blessed and blessed without any punishment.

If you want to avoid rock bottom, you need to put away the sin in your life. “Do not let sin reign in your mortal body so that you obey its evil desires” (Rom 6:12). Put away your sin! Do you need our help getting rid of sin this morning?