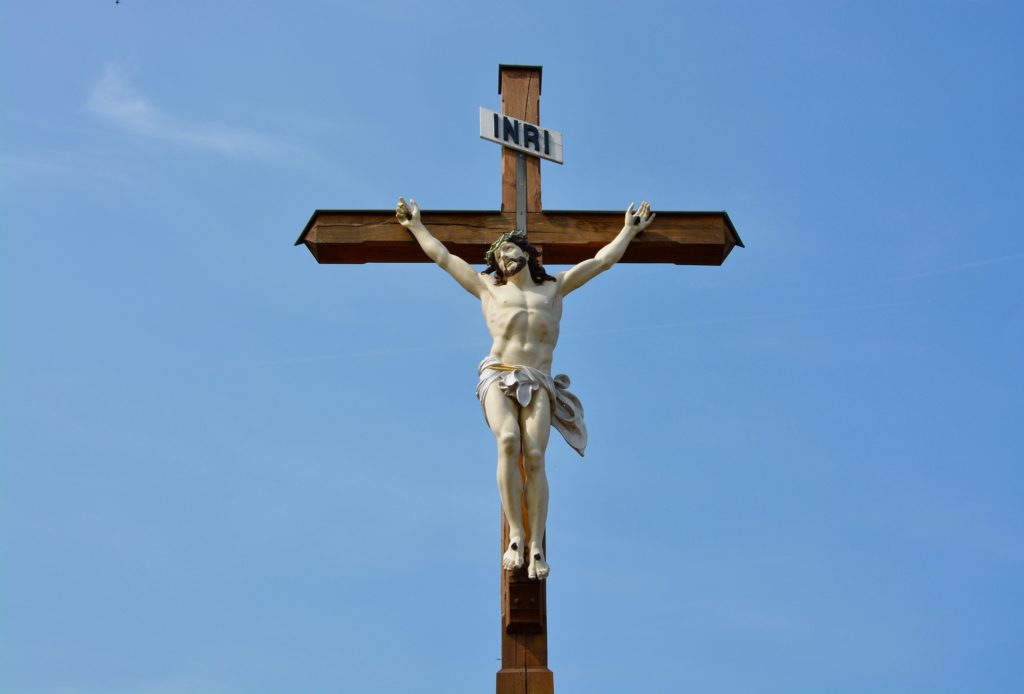 Winston Churchill said of the young men in the Royal Air Force, “Never in the history of mankind have so many owed so much to so few.” Although we owe so much to those who have defended this nation and her way of life, we owe so much more to Jesus. It was he who came and gave his life so that we could live eternally: “He was wounded for our transgression, He was bruised for our iniquities; The chastisement for our peace was upon Him, And by His stripes we are healed” (Is. 53:5).

Because Jesus’ death is so important to the Christian, the author of Hebrews uses Jesus’ death to make an important point: these Christians could not go back to Judaism. These Christians were being told by their Jewish friends that now that they were Christians they had no part in Judaism. The Hebrew Christians wanted to go back to Judaism; it was what they knew. Thus, the author wrote, “Do not be carried about with various and strange doctrines. For it is good that the heart be established by grace, not with foods which have not profited those who have been occupied with them” (Heb. 13:9).

Those encouraging these Jewish Christians to go back to Judaism were apparently bragging about the altar upon which they offered sacrifices. In many Old Testament sacrifices, the worshiper ate part of the sacrifice. Apparently, the Judaizers said something like, “You can’t eat of this sacrifice because you’re not a Jew. You’re not in favor with God, because you’re not a Jew. Concerning this, the author of Hebrews wrote, “We have an altar from which those who serve the tabernacle have no right to eat” (Heb. 13:10).

Yet, the sacrifices offered on the Day of Atonement were not suitable for human consumption. The author of Hebrews wrote, “For the bodies of those animals, whose blood is brought into the sanctuary by the high priest for sin, are burned outside the camp” (Hebrews 13:11). According to Leviticus 16, no man could eat the flesh of the sin offering; the skin, flesh and entrails of the animal were carried outside the gate and burned.

After telling these Jewish Christians not to be carried away with false doctrine and reminding them of the Day of Atonement, he begins speaking of the death of Jesus and our response. Let’s think about that death and our response:

Jesus Suffered Outside the Gate, v 12

“Therefore, Jesus also, that He might sanctify the people with His own blood, suffered outside the gate.”

Jesus sought the sanctification of the people.

Sanctification refers to the setting apart of the people of God from sin to God. Sanctification means holiness. God desires that his people be holy. Jesus gave his blood in order that God can view his people as holy. Jesus died for the church so “that He might sanctify and cleanse her with the washing of water by the word, that He might present her to Himself a glorious church, not having spot or wrinkle or any such thing, but that she should be holy and without blemish” (Eph. 5:26-27). Christians are holy—when God views us through the blood of Jesus, we have no sin.

But surely you do not believe that the only way Christians are to be holy is through the blood of Jesus; we must work for holiness; we must exhibit holiness in our lives. Jesus “bore our sins in His own body on the tree, that we, having died to sins, might live for righteousness” (1 Pet. 2:24). Because Jesus died for us, we need to live holy lives. We cannot live however we choose; we need to live the way God has chosen!

Once we are cleansed by the blood of Jesus, we cannot allow ourselves to go back to the filth of the world. Let us determine that we will live holy lives! Are you living a holy life?

Jesus’ death is not often referred to as “suffering” in Scripture, but here that terminology is used. Jesus suffered greatly as he died for man.

He was beaten, lashed, crucified for us—that involved great agony. The soldiers mocked Jesus (Mk. 15:19). Surely Jesus suffered while he was beaten on the head with a reed.

Jesus was scourged (Jn. 19:1). When Jews were scourged. they received at least 40 lashes, but they often received more. The one who was scourged was stripped of all his clothing, and he was tied around a post; this stretched the back to make it ripe for beating. He was then beaten with leather whips with pieces of metal or bone tied in the ends to rip the flesh. Surely, Jesus suffered greatly as he was scourged.

Jesus was crucified. Huge spikes were driven through his hands and feet; this severed major nerves which caused unbearable pain to shoot throughout his body. The position the victim of crucifixion had to assume made breathing extremely difficult; those on the cross struggled for hours and many times day to breathe. Surely, Jesus suffered greatly as he was crucified.

But, adding to the physical torment Jesus endured was the emotional and spiritual torment of bearing the world’s sins. Because Jesus bore the world’s sins, he was separated from the Father during the crucifixion: “My God, My God, why have You forsaken Me?” (Matt. 27:46). Jesus “bore our sins in His own body on the tree” (1 Pet. 2:24).

Jesus did his suffering outside the gate. Just as the animals in the Old Testament were burned outside the camp on the Day of Atonement, Jesus suffered outside the “camp” of Jerusalem. In this way, Jesus, death typifies the death of the animals under the Mosaic Code.

We Suffer Outside the Gate, v 13

“Therefore, let us go forth to Him, outside the camp, bearing His reproach.”

The original meaning of this verse:

Let’s not forget that this verse was written in a context of these Hebrew Christians’ wanting to go back into Judaism. They were bearing reproach for being Christians, for the Jews seem to have been giving them quite a hard time. The “camp” here seems to stand for Judaism, and the author his saying, “Bear the reproach, and don’t go back to Judaism.”

Although this verse has a definite context in the first century, we can make applications today. Let us go to Christ, bearing his reproach.

We must go to Christ.

Throughout Scripture, we are encouraged to come to him. “Come to Me, all you who labor and are heavy laden, and I will give you rest” (Matt. 11:28). “And the Spirit and the bride say, ‘Come!’ And let him who hears say, ‘Come!’ And let him who thirsts come. Whoever desires, let him take the water of life freely” (Rev. 22:17). Have you been to Christ, or do you need to come to him?

We need to bear his reproach.

Jesus bore much reproach as he died for mankind. Crucifixion was a punishment for criminals; Jesus died by capital punishment—there’s shame in that. Let’s not forget the words of Galatians 3:13: “Cursed is everyone who hands on a tree,” a quotation from Deuteronomy 21:23.

We’ve thought about the cross of Jesus and our response to the cross this morning. How will you respond?