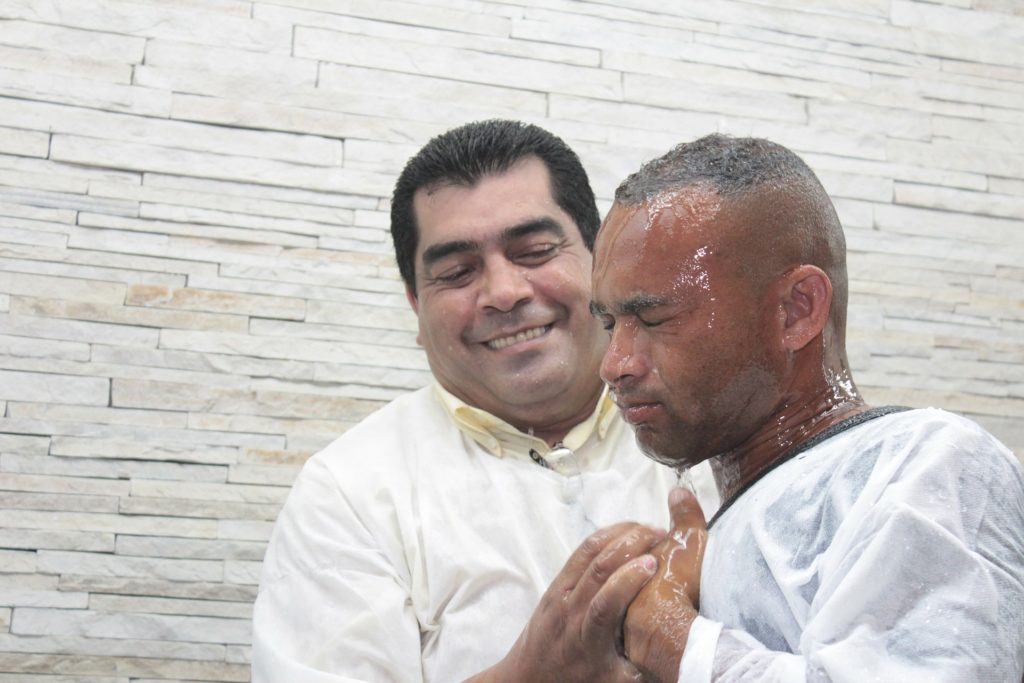 It was the practice of Charlemagne, emperor of the Holy Roman Empire, to force all those he conquered to become Christians. Into the rivers and lakes near the battlefield he drove his defeated enemies to be baptized. Thus, thousands of Saxons were made to profess the Christian faith.

One scheme Charlemagne hit upon to persuade the Saxons to be baptized peacefully was to give every convert a clean, white shirt. So numerous were the requests for these shirts that the supply ran out, and the newly-baptized began receiving instead a coarse yellow shirt. This was not so attractive, as we can see from this disdainful remark of a Saxon who was offered a yellow shirt: “I have been baptized already twenty times and received white shirts. I refuse to be baptized any more and will have nothing to do with a religion that is so stingy with its clothes.”

Obviously, it’s shameful to see baptism reduced to such a low.

John appeared preaching “a baptism for the forgiveness of sins.” His baptism, like Christian baptism which would come later, provided folks a chance to have sins forgiven. The Jews were familiar with baptism. Gentiles who desired to convert to Judaism were immersed in order to remove the filth of being a Gentile. Here, however, John instructs the Jews to remove the guilt of their sin through baptism.

John, in his preaching of baptism, proclaimed a—

Luke quotes from Isaiah 40:3-5 to remind us of John’s preparatory role.

John was the one calling out, “Prepare the way for the Lord, make straight paths for him.” You know how important preparation can be. You’re not going to let that 16-year-old behind the wheel unless he’s had at least a little preparation. You don’t want a surgeon cutting on you unless he has prepared.

God also values preparation, and he prepared the world to accept his Son. “When the time had fully come, God sent his Son, born of a woman, born under law” (Gal 4:4). In other words, when the time was just right, God allowed his Son to be born.

God did much providentially to prepare the world for Jesus’ coming. Alexander’s conquests had made Greek an almost universal language. The Romans held barbarians at bay in the first century, and there was largely peace throughout the world. The synagogue had become the center of Jewish life, so Paul and others could go to the synagogue and teach the Jews.

Through John, “Every valley shall be filled in, every mountain and hill made low. The crooked roads shall become straight, the rough ways smooth.” The language here is obviously reminiscent of constructing a straight road—filling in valleys, smoothing mountains, taking out dangerous curves, and paving rough spots. I think we’re supposed to see these metaphors here in terms of road construction. The point is that John is helping pave the road which will lead tot eh Messiah, and he calls upon the Jews to help him make that road ready when the Messiah comes.

Many see the metaphors here as referring to repentance, and I think that’s also right. The point is that in repenting, the nation would become ready to receive the Messiah.

John’s baptism was preparatory in that he prepared the people for the Messiah’s coming.

Are there ways that baptism today can be seen as preparatory? I think there are. Baptism is preparatory in that we are preparing ourselves to live in a new way: “We were therefore buried with him through baptism into death in order that, jut as Christ was raised from the dead through the glory of the Father, we too may live a new life” (Rom 6:4). Baptism is also preparatory in that we are preparing for our future resurrection. The act reminds us, according to Paul, of the resurrection of Christ. AS he was raised never to die again, we are demonstrating our faith that we, too, shall be raised through him never to die again.

There’s another point we need to make here: Just as the Jews needed to be prepared to accept Christ, many today need preparation to accept him. That’s a principle we find elsewhere in Scripture. “I planted the seed, Apollos watered it, but God made it grow” (1 Cor 3:6). In other words, sometimes it takes time for people to come to Christ—to continue Paul’s agricultural metaphor: sometimes the soil must be plowed, the seed planted, the weeds pulled up, water and sunlight added before the seed grows.

How many folks have you known who required some preparation before they came to Christ? When they were first approached, they just weren’t interested, and they wanted nothing to do with truth. But over time, they heard more and more truth, became more and more receptive, and obeyed the gospel. We don’t need to give up on people—we may be preparing the soil.

Crowds were coming out to be baptized by John. John spoke sternly to them.

He said, “You brood of vipers! Who warned you to flee from the coming wrath?” Poisonous snakes were fairly common in this part of the world, and John’s referring to his hearers as poisonous vipers is intended to be far from flattering. In John’s time, vipers were commonly believed to eat their way out of their mother’s womb, and referring to these folks as a generation of vipers is intended to show that they don’t have regard for anyone—they’d kill their own mother to get what they wanted.

These crowds were told, “Produce fruit in keeping with repentance. And do not begin to say to yourselves, ‘We have Abraham as our father.’ For I tell you that out of these stones God can raise up children for Abraham.’”

They were to produce fruit in keeping with repentance. It’s so easy to say, “I’m sorry. I repent.” That’s not at all what God is after. God wants results; God wants fruit. “In the same way, let your light shine before men, that they may see your good deeds and praise your Father in heaven” (Matt 5:16). “This is to my Father’s glory, that you bear much fruit, showing yourselves to be my disciples” (Jn 15:8).

Our baptism needs to be a producing baptism, a baptism produces fruit of repentance, a baptism which changes our lives. Scripture speaks of our need to reform. “We were therefore buried with him through baptism into death in order that, just as Christ was raised from the dead through the glory of the Father, we too may live a new life” (Rom 6:4). “He who has been stealing must steal no longer, but must work, doing something useful with his own hands” (Eph 4:28). In other words, those who have been thieves can’t continue to be thieves, but they must change their behavior, bring forth fruit worthy of repentance.

One evening a man was baptized into Christ, and the next morning he went to a neighbor bearing a watch. The man asked his neighbor, “Do you recognize that old watch?” “Why, yes,” answered the other. “Those are my initials; that is my watch. I lost it eight years ago. How long have you had it, and how did you get it?” The man said, “I stole it.” His neighbor asked, “What made you bring it bring it back now?” The man said, “I was converted last night, and I have brought it back first thing this morning. I would have brought it last night, but you weren’t up.”

The Jews couldn’t count on their ancestry to save them. The Jews really thought that simply because they were Abraham’s descendants God would save them. John says, “Look, it’s not your ancestry that will save you; it’s your obedience to the will of God. God’s powerful enough to produce descendants of Abraham from stones if he so desired.”

“The ax is already at the root of the trees, and every tree that does not produce good fruit will be cut down and thrown into the fire.” John obviously speaks of God’s judgment here, and he does so in the common biblical metaphor of fruit bearing and bareness. If we’re not producing fruit of repentance, we’re going to be judged. Are you producing fruit of repentance?

In these verses, John expounds on the idea of producing fruit worthy of repentance, and he tells his hearers how they can do so. John’s instructions really boil down to this: “Honor your fellow man.”

That principle runs throughout Scripture. Paul reminded the Ephesian elders: “In everything I did, I showed you that by this kind of hard work we must help the weak, remembering the words the Lord Jesus himself said: ‘It is more blessed to give than to receive’” (Acts 20:35). Paul instructed Timothy: “Command them [the rich] to do good, to be rich in good deeds, and to be generous and willing to share” (1 Tim 6:18).

We do a good job of helping the poor in this congregation. So many of you gave generously to help with hurricane relief. So many of you bring pantry items in month after month. So many of you helped the young people yesterday prepare baskets to take to the widows. Let us always be a generous, giving people!

When the tax collectors asked what they should do, John answered, “Don’t collect any more than you are required to.” You know that tax collectors were given a set amount of revenue to collect and any they received over that amount they were permitted to keep. It was a common practice and was partially responsible for the low opinion most had of tax collectors. Zacchaeus seems to have been guilty of his practice—Notice what he told Jesus, “Here and now I give half of my possessions to the poor, and if I have cheated anybody out of anything, I will pay back four times the amount” (Lk 19:8).

The principle here seems to be this: Be honest with people, don’t cheat them. We need to be honest with folks and not be a person who would cheat anyone. “The LORD abhors dishonest scales, but accurate weights are his delight” (Prov 11:1). “Do not repay anyone evil for evil. Be careful to do what is right in the eyes of everybody” (Rom 12:17).

How honest are we? When we tell our teacher we didn’t get our homework done because Grandma’s been in the hospital, ahs Grandma really been in the hospital? When we take a sick day, are we really sick? When we do our income taxes, are we as honest with Uncle Sam as we could be and as we ought to be?

When the soldiers asked what they should do, John answered, “Don’t extort money and don’t accuse people falsely—be content with your wages.” John tells these government servants what he told the other government servants: “Don’t mistreat people.”

Yet John ads another note and says, “Be content with your wages.” Soldiers then, as now, weren’t paid extremely well. John says, “Be satisfied with what you get.”

Do you need to come this morning and accept Christian baptism?