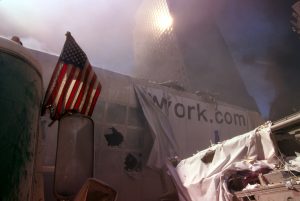 September 11, 2001 is indelibly etched in the mind of every American who watched that day’s events unfold on television. We all remember where we were when we heard the news on that horrific day—I was in the bathroom at the sink brushing my teeth. My wife and I remained glued to the television throughout the day as we saw the second plane hit the World Trade Center, as we saw people jump from those towers, as we saw smoke rising from the Pentagon, as we saw the towers fall, as we saw the President toted from one secure location to another, and as we saw the President address the American people that evening. What a day!

We can—and should—learn some important lessons from that day.

We saw on that day just how evil some people are. People have been evil from the very beginning—Cain slew Abel and God destroyed the world with water because of man’s wickedness—but on 9/11, we were reminded again o how evil man can be.

On 9/11 and the days following, we saw just how brave people can be. First responders rushed into the towers without thought for their own safety. Passengers stormed the cockpit on Flight 93 and saved untold souls on the ground. Rescuers worked tirelessly attempting to find survivors amid the rubble.

People care about one another

We heard stories about victims in the towers helping others come to safety. We saw people lining up to give blood. We saw people gathering in prayer for the survivors and the families of the dead.

Television is a powerful medium

We all stared at our television screens in horror at the images we were attempting to process. Television brought into our living rooms images of people jumping to their deaths, of a President attempting to calm a nation, and of New Yorkers attempting to flee Manhattan. Television is such a powerful medium and can be used for good or ill.

Life can end in an instant

We saw before our very eyes people entering eternity when they planned to be entering meetings. Life is short, tomorrow is not promised, and life can end when we least expect it.

We need to be prepared for eternity

A friend in college would often say, “You can’t get ready—you have to be ready.” I think Randy had a point. On that dreadful day, we saw souls enter eternity without Jesus. What a horrific thought!

The importance of leadership

Rudy Giuliani and George W. Bush, whatever you might think of their politics, received high marks in the polls for their leadership. In times of crisis, whether in the church or in the nation, people look for strong leadership.

In the days following 9/11, we learned just how valuable family can be—we saw people frantically searching for their loved ones and we heard that many had called from planes or the towers to say goodbye. We need to remember just how important our family is and treat one another with kindness, for we never know when those ties might be severed.

May God bless you, those who still grieve, and may he bless the United States of America!