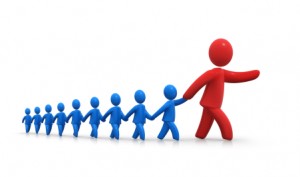 With my disability, I’ve had to give over mowing the yard to my boys. I hate that – I really enjoy mowing and the boys just do not mow as I would like (this summer I was embarrassed to death by my yard, but the boys did the best they could to help Papa, so I kept my mouth shut). Summer before last, I wanted RJ to mow a patch of grass not far from the road. I told him how to do it, and he didn’t do it properly. I told him again how to do it, and he still didn’t get it right. I was so exasperated that I just had to leave him for a little while and walk back in the house. When I told Tammy what he was doing, she – wisely – looked at me and asked, “Justin, did you tell him or did you show him?” I hadn’t bothered to show my son how it was done, but I expected him to know by my teaching. Life doesn’t work that way.

Jesus didn’t simply come and tell us how to live, but He lived it first: “In the first book, O Theophilus, I have dealt with all that Jesus began to do and teach” (Acts 1:1). Notice the word order: “Jesus began to do and teach.” I have serious doubts that’s by accident – Jesus did and then He taught. Paul did the same thing: “In all things I have shown you that by working hard in this way we must help the weak” (Acts 20:35).

The power of an example goes a long way. In my life, I’ve been blessed with good examples. Space would prevent me to write about every positive example I’ve had, but I wish to highlight some important examples which have shaped my life.

Examples can do a great deal. I’m grateful, very grateful, for the examples I’ve seen in my life. Who has blessed you by example?

As I see the example of godly people, I see how they have walked with God, and they encourage me to walk with Him all the more.