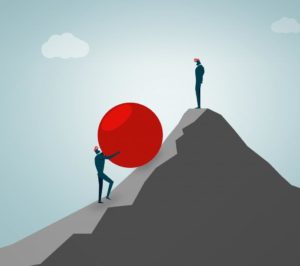 When I was in West Virginia, there was an elderly lady in the congregation who didn’t want anyone to know what was taking place in her life. She came into worship one Sunday, handed me a note, and said, “This note is for your eyes only.” The note said that she was having surgery at 9:00 the next morning. Her surgery was not to be announced, and it was not to be in the bulletin. She was to have no visitors from the church.

I wanted to respect her wishes. That Monday morning, I worked in the office and didn’t go to the hospital. I got a phone call from her sister that afternoon. Mary was very hurt and disappointed that I didn’t come to the hospital. I explained to Helen that Mary had said people from the church weren’t to visit. Helen said, “Justin, I know, but that doesn’t apply to you. She expects you to be there.” From then on: I never told anyone when Mary was in the hospital, but I always made sure I visited her.

Maybe you’ve been in a situation where you yourself needed help, but you were too embarrassed to ask for help. We’re hard-working Americans, after all. The idea of self-reliance is very important in our culture–We’re to do things for ourselves.

“Bear one another’s burdens, and so fulfill the law of Christ.”

We are to bear one another’s burdens. In classical Greek, the term “bear” means to hold in one’s hands or to lift up. “Burden” refers to a large weight. The term even meant oppression; the idea is this something you cannot handle on your own. The image is that someone has a hugely heavy burden and that a brother/sister runs to his/her aid.

The New Testament is full of examples where individuals lifted a heavy burden for others.

You must remember that lepers were outcasts of society. They did, after all, have a dangerous and highly contagious disease. Yet, Jesus touches him. Touching a leper made one unclean, so this leper likely had not had any human touch in years and years. But, Jesus, ignoring societal norms, reaches out, touches this man, and has contact. Jesus then heals the man. Jesus lifts this man’s heavy, heavy burden.

Will you act today to be a “Burden Bearer” and “so fulfill the law of Christ”?

That’s good, because Paul says at verse 5: “Each one shall bear his own load.” The King James really did a bad job of translating here. The King James almost makes Paul sound as though he’s being inconsistent. In the same paragraph, Paul says that we’re both to bear one another’s burdens and to bear our own burden.

I like the New King James translation of “load” here. The Greek term was a military term used for a soldier’s kit or a man’s pack. The words Paul uses here are quite different. The word he uses at verse 2 refers to something that one person could never lift by himself; the word at verse 5 refers to something easily lifted by one person. To illustrate the difference in these words, think of the difference between a boulder and a pebble.

Commit to carrying your own load, while you help others bear their burdens.

How do we put this into practice? We need to think about that question in three different ways.

One: We must be people who are willing to bear the burdens of others.

Doing so demonstrates Christian love and service. Is there someone you know who carries a heavy burden? How can you lift that burden? The answer, of course, will depend on the specific burden, but there are some universal things we can do.

We can pray with/for the individual. Prayer, as you know, has great power. In Acts 12, Peter has a heavy burden–he’s in prison awaiting an all-but-certain execution. The church prayed: “Constant prayer was offered to God for him by the church” (Acts 12:5). God sends an angel to get Peter out of prison. That is the power of prayer!

Our prayers have power because we pray to a powerful God! Let people know you are praying for them–How that lifts the spirits!

We, as we’ve already mentioned, must be willing to serve. The type of service we render will depend on the burden. But, we, as God’s people, should never be afraid to serve.

Two: We must allow others to bear our burdens.

Too many times we try to lift heavy burdens ourselves. That’s not the way God intended it! If I refuse to allow you to bear a burden, I’m refusing you an opportunity to be a blessing.

Commit to allowing someone to bear a burden for you this week. Share something maybe you wouldn’t normally share; allow someone to do for you something you’d normally try to do yourself. I know that goes against everything we’ve ever been taught, but it’s biblical!

Three: We must carry our own loads.

As we think about allowing others to help us bear burdens, we must determine what we can do for ourselves and what we need help doing. Sometimes people do want others to do for them what they can and need to be doing for themselves. Here’s what you need to do: Take inventory to determine what is a burden and what is a load. Carry the load yourself and do not burden others with it.

There’s something you can never do for yourself: You could never save yourself from sin. “When we were still without strength, in due time Christ died for the ungodly” (Rom 5:6). Sin is a burden we cannot bear ourselves! Will you allow Jesus to bear that burden?