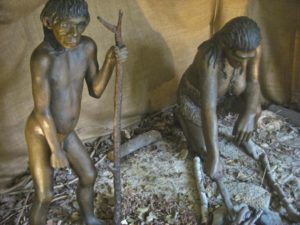 Theistic evolution is an approach to harmonize popular evolution and Scripture. This approach teaches that God is some First-cause, i.e., he set the universe in motion and allowed evolution to take place. God did not personally “create” all life. Rather, he allowed life as we know it to evolve. This theory teaches that at some point man had evolved to what he is today. At this point God created the spirit and placed it in man. It was at this point that man was a human and no longer an animal.

Man is faced with three options as to how life appeared on the planet.

Genesis presents God as speaking animals into existence. Genesis 1:21, 25. “God created humankind in his image, in the image of God he created them; male and female he created them” (Gen. 1:27). In this short verse, the Bible says three times that God created mankind. This verse does not say that God allowed humankind to evolve.

There is nothing in these verses which would cause one to take them symbolically. There is a rule in biblical interpretation which says that one should understand a passage literally unless there is evidence to take it otherwise. These verses do not present any evidence that they should be taken symbolically. Some say since the Bible ends symbolically (Revelation) it must begin symbolically. Just because the Bible ends symbolically has nothing to do with how it should begin. Revelation “sounds” symbolic, but Genesis just doesn’t “sound” that way. No one would believe in theistic evolution from these verses were it not for popular scientific belief. One cannot arrive at this conclusion merely by reading Genesis.

The New Testament endorses the idea that God created man.

We need to remember that evolution is a THEORY; it has not been proven. In fact, evolution cannot be proven.

Fossils are not transitional. If evolution did in fact occur, we would expect fossils to show signs of transition. The fossils should show one species developing into another species. However, this does not occur; in fact, fossils appear fully developed. In his Origin of Species, Charles Darwin himself called this fact “a very obvious difficulty” (Darwin, 312-313).

Variation within animals does not prove theistic (or atheistic) evolution. Some point to different variations to prove evolution. For example, a zeonkey is the product of a jenny (a female donkey) and a zebra. The offspring of a cow and a buffalo is known as a catcall. Different breeds of dogs could have very well come from just one pair. In fact, there are at least 150 distinct kinds of human beings.

Mutations do not prove evolution. Some say that mutations occurred in species and these mutations were passed onto offspring and thus resulted in evolution. However, no mutation has been demonstrated to make “an animal more complicated or bring any new structure into existence” (Gleason Archer, Survey of Old Testament Introduction, 205). One evolutionist (I. Manton) commented, “The fundamental causes of evolution on the grand scale, as it has occurred through geological time and in the fashioning of the great groups of animals and plants, cannot yet be described or explained” (Quoted in Archer, 205).

Embryos do not prove evolution. The human embryo goes through distinct stages. At one stage the embryo looks as though it has fish gills. Evolutionists say this points back to a time when our ancestors were fish. These embryos also have a tail that is said to resemble those of animals.

However, these beliefs overlook important information. The “gills” of an embryo are never used as gills at any point of development. The “tail” is nothing more than the spine and legs developing.

Certain animals make it very difficult to believe in any form of evolution. There are many such animals, but only two will be considered here.

This lesson was originally delivered by Dr. Justin Imel, Sr. as part of a Vacation Bible School at the Owingsville church of Christ in Owingsville, Kentucky.