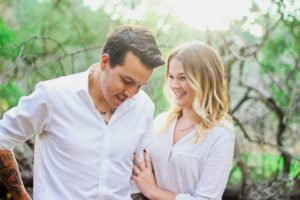 A justice of the peace in a small New England town was called upon to perform his first marriage ceremony. After he had the knot securely tied, the young couple continued to stand before him as if expecting some further rite. Whereupon the justice stammered out in a brave attempt to round off the ceremony with something of a religious turn, “There, there, it’s all over! Go and sin no more!”

Wouldn’t it be nice if when we got married we really went and sinned no more? We know, however, that’s not the way it is in real life; we do sin when we get married and we often sin against our spouse. When a couple gets married, they often have unrealistic expectations of what marriage should be like. Those unfulfilled expectations lead to frustration, anger, and hurt. Careless words can leave deep scars on a new marriage. Anger can cause us to act in ways that otherwise we would not act. How do we go on in a family when we have so much hurt and resentment? How do we find forgiveness for our spouse or other members of our family who have wounded so deeply?

This morning, we wish to explore the case of Joseph to learn how we, like he, can forgive. Joseph, after all, had so much he could hold against his brothers. Because Jacob loved Joseph more than his other sons, Joseph’s brothers couldn’t stand him: “When his brothers saw that their father loved him more than all his brothers, they hated him, and could not speak peaceably to him” (Gen. 37:4). When Joseph told his brothers his dreams about their paying homage to him, they became jealous (Gen. 37:11). Then, of course, his brothers took Joseph, sold him into slavery, and they reported to their father that Joseph had been killed. Joseph had every reason to be hateful and expect justice, but we find Joseph being forgiving toward his ten brothers who sent him to slavery. How could Joseph forgive when he had been wronged so greatly?

Even though his family had done him so wrong, Joseph still loved them. Joseph asked whether or not his family was still alive; when he saw Benjamin, he went out and wept (Gen 43:26-30). When Joseph finally revealed himself to his brothers, “He wept so loudly that the Egyptians heard it, and the household of Pharaoh heard it” (Gen. 45:2). When Joseph saw his father, he “fell on his neck, and wept on his neck a good while” (Gen. 46:29). Here’s something we can learn from Joseph:

What about when our family severely disappoints us? Will we find value in our family? There is value in marriage. Because there is such value in marriage the author of Hebrew wrote, “Let marriage be held in honor by all” (13:4). There is something special- honorable – about being married. There is some reason you feel in love with that person in the first place and there’s a reason you married that person in the first place. Granted, our spouses are human beings and they have their faults, but there’s something special there, too. Will we seek to find the good in our spouses, or will we seek to find their faults?

Just as Joseph couldn’t go out and hunt other brothers, we can’t go out and hunt out another family. Our children are our children, our parents are our parents, our siblings are our siblings, and our spouses are our spouses. You know that God never intended for us to get married, try married life, and if our spouse didn’t suit us trade him or her for another, God always intended we would be committed to marriage. It’s not that when our spouse disappoints us, we can think, “Well, I’m going to try again.” Granted, Jesus said that in the case of adultery, hurt can be so deep that divorce and remarriage is acceptable. Yet, with other hurts, we need to accept our family for what it is, and find value.

In psychotherapy, there is a technique referred to as Cognitive Behavioral Therapy (CBT, for short). In CBT, you really attempt to change people’s actions by changing their cognitions, their thought process. That’s really what I’m arguing for here. We need to focus and think on the good in our family, rather than the bad. When we think on the good, we’ll act accordingly. Will we focus on the good in our family or on the bad?

Joseph Knew that God Had A Plan

Joseph told his brothers, “It was not you who sent me here, but God; he has made me a father to Pharaoh, and lord of all his house and ruler over all the land of Egypt” (Gen. 45:8).

You know the story of Joseph and how God sent him to Egypt. A severe famine was coming, and Joseph was the one who could advise Pharaoh about how to horde the plenty and dole out that surplus when the famine hit. Because of Joseph’s leadership in Egypt, Abraham’s posterity was preserved through whom the Messiah would come. Had Joseph not gone to Egypt, it’s very likely that Abraham’s descendants would have died in the famine in direct violation of what God promised Abraham.

You know that God controls all things, and he has used his providence to bring about what he deems best. Notice what God told Jeremiah: “Before I formed you in the womb I knew you, and before you were born I consecrated you; I appointed you a prophet to the nations” (Jer. 1:5). Remember what Peter said at Pentecost: Jesus was “handed over to you according to the definite plan and foreknowledge of God” (Acts 2:23).

Is it too much to think that even when our family severely disappoints that God is in control and has a plan? God does not make us or those around us sin. Everyone has free choice; God allows us to determine for ourselves what we will and will not do. Notice again what Peter told the crowd at Pentecost: “This man, handed over to you according the definite plan and foreknowledge of God, you crucified and killed by the hands of those outside the law” (Acts 2:23).

However, is there some plan that God could have even when those around us hurt us? “We know that all things work together for good for those who love God, who are called according to his purpose” (Rom. 8:28). Is there some good that can come from the hurt and disappointment we feel? “We also boast in our sufferings, knowing that suffering produces endurance, and endurance produces character, and character produces hope, and hope does not disappoint us” (Rom. 5:3-5).

He Knew He Had to Do the Right Thing

Joseph told his brothers, “I fear God” (Gen. 42:18). A look at his life indicates that he did honor God. When Potiphar’s wife enticed Joseph to sexual sin, he said, “How can I do this great wickedness, and sin against God?” (Gen. 39:9). When she persisted, he fled out of the house. When Joseph was cast into prison, he interpreted the dreams of the cupbearer and the baker. He could have said, “I’m in this despicable place because I tried to do what God wants. I won’t tell them what God’s saying through their dreams.” Yet, he did not. And, when God sent Pharaoh a message, Joseph interpreted it. When his brothers came to him, Joseph could have retaliated. He could have denied them grain, but he did not. When the ten brothers first reported to Joseph, he threw them into prison for three days on charges of being spies. When the brothers went back to get Benjamin, Joseph kept Simeon in prison. What would have prevented Joseph from throwing them into prison? But he did not.

Will we seek to do the right thing even when our family has severely disappointed us?

As we read through the narrative of Joseph, we find him serving his family. He gave his brothers grain when they came to him. The second time the brothers came to him Joseph threw a feast for them. He told his steward, “Bring the men into the house, and slaughter an animal and make ready, for the men are to dine with me at noon” (Gen. 43:16). Joseph helped his brothers settle in Egypt – “Joseph settled his father and his brothers, and granted them a holding in the land of Egypt, in the best part of the land, in the land of Rameses, as Pharaoh had instructed” (Gen. 47:11). Joseph didn’t sit around and think, “They were so cruel to me, and they owe me something.” Instead, he went out and served them.

Will we serve our family even though we might have been wronged? Jesus told us that greatness comes from serving. “Whoever wishes to be great among you must be your servant, and whoever wishes to be first among you must be your slave” (Matt. 20:26-27). Greatness doesn’t come by saying, “Hey, you did something against me, and you owe me something.” Greatness comes by saying, “Let me serve you.”

I will be the first to admit that saying what’s been preached this morning is far easier than putting it into practice.

Yet, we, as Christians, have been called upon to put this into practice. “Be kind to one another, tenderhearted, forgiving one another, as God in Christ has forgiven you” (Eph. 4:32). Will we forgive those who have wronged us? Do you need to come this morning and find God’s forgiveness?