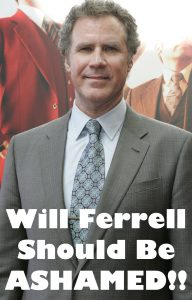 An update to this article is posted here.

Will Ferrell should be ashamed of himself. According to news reports, the former Saturday Night Live actor will play former President Ronald Reagan in a new film. There’s no trouble in playing a President of the United States on the big screen; in fact, I find great enjoyment in historical films about Presidents. The problem with this film is that Ferrell will play Mr. Reagan in a comedy about the President’s struggle with Alzheimer’s Disease – that’s right, this big shot actor is going to make fun of a man’s struggle with dementia.

No, I find nothing funny at all about dementia, and I’m appalled that any actor – comedian or otherwise – could find any humor in the plight of Alzheimer’s patients.